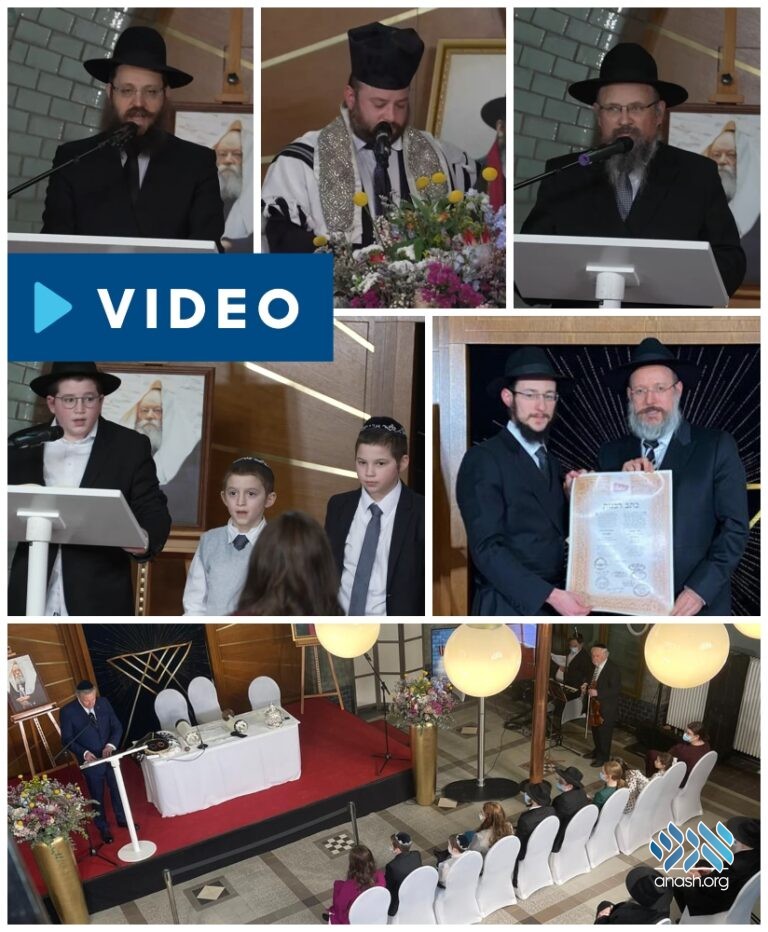 One year after the passing of Rabbi Binyamin Wolff a”h, a new Chabad House was dedicated in his memory. During the ceremony, his son-in-law Rabbi Levi Gottlieb was appointed Rav of the Chabad community and Shliach to Hannover.

Exactly one year after the tragic passing of the unforgettable and beloved shliach to Hannover, Rabbi Binyamin Wolff a”h, his wife Shterni, the dedicated Shlucha to the city, presided over the grand opening of the brand new Chabad Shul and Center in Hannover dedicated to his memory – “Bais Binyamin.”

On Tuesday, Rosh Chodesh Iyar, Rabbi Wolff’s first Yahrzeit, Shluchim, Rabbonim, and dignitaries from far and near participated in the historic event.

Last year the Jewish world was shocked by Rabbi Wolff’s untimely passing and inspired by his wife Sterni’s firm decision to remain in Hannover to continue the Rebbe’s Shlichus they merited to embark on 15 years earlier.

Over 16,000 people generously participated in the fundraising campaigns to ensure the continuation and growth of this tremendous Shlichus and to properly honor Rabbi Wolff’s legacy.

Due to Hashem’s great kindness and with the Rebbe’s blessings a new building was purchased and renovated and will now serve the 10,000 Jewish residents of Hannover as well as thousands of foreigners who travel there for tourism, business and medical treatment.

Former President of Germany Mr. Cristian Wulff joined Mrs. Shterni Wolff and her children in cutting the ribbon and in his remarks expressed how Mrs. Wolff represents true determination and feminine power.

Rabbis Yisroel Diskin (Munich), Yehuda Teichtel (Berlin) and Shlomo Bistritzky (Hamburg), and other Shluchim to Germany joined the President of the Jewish Federation of Lower Saxony Mr. Michael Forst, and other German Jewish community activists from around the country, in celebrating this bittersweet, yet tremendous, milestone.

Rabbi Yehuda Teichtel, the force behind the historic project, emceed the event.

The event was also a Siyum celebration for a Torah scroll that was commissioned shortly after Rabbi Wolff’s passing. All in attendance were honored to fill in letters as customary.

The event was also a Siyum celebration for a Torah scroll that was commissioned by family friends shortly after Rabbi Wolff’s passing. It was written at the “Merkaz Stam” of Tzefas and the mantle and crown were donated by the Rabbinical Center of Europe. All in attendance were honored to fill in letters as customary.

Pre-recorded greetings were delivered by Rabbi Moshe Kotlarsky (Vice Chairman of Merkos L’inyonei Chinuch), Gerhard Schröder (Retired Federal Chancellor of Germany), Belit Onay (Lord Mayor of Hannover) and Boris Pistorios (Minister of the Interior and Sport of Lower Saxony). A special thanks is due to Mr. George Rohr, the legendary supporter of Shluchim throughout the world for the generous grant which made this project possible.

The German media covered the story of how the young Shlucha succeeded in channeling her unbelievable grief into the springboard for so much powerful goodness.

Germany’s biggest-selling daily newspaper, BILD, read by millions each day, reported on the story and caused a tremendous Kiddush Hashem.

The Rebbe’s vision and mandate to transform tragedy into growth was realized in Hannover in an unprecedented fashion.