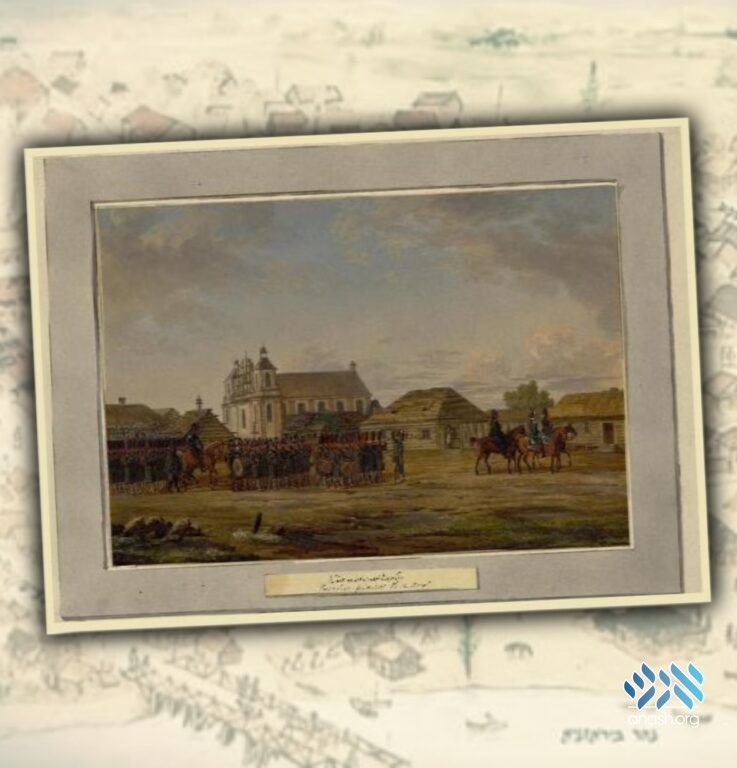 A painting of the town of Lubavitch during the French conquest, painted by Bavarian painter Albrecht Adam, who accompanied Napoleon during the 1812 Russian campaign, was recently published in the ‘Otzros Lubavitch’ biweekly.

A painting showing the town of Lubavitch as it appeared during the time of the Alter Rebbe, as painted by an artist who accompanied the French army as it invaded Russia, was recently published.

The artwork was created by artist Albrecht Adam in the year 1812, which corresponds to the Hebrew years of 5572-5573, the final year and a half before the passing of the Alter Rebbe. Adam was a Bavarian painter who accompanied Napolean during the 1812 Russian campaign, serving as an official artist to the Bavarian contingent in Napolean’s Grande Armée.

The painting shows French soldiers in the area which would later be the approximate location of the “chotzer” – the courtyard which housed the home and shul of the Rebbe Maharash, and later the homes of the Rebbe Rashab and Frierdiker Rebbe and the building which housed the original Yeshivas Tomchei Tmimim.

At the time, the nerve center of Chabad Chassidus had not yet moved to the town of Lubavitch; that would only happen a number of years after the passing of the Alter Rebbe. Nevertheless, the town did have a connection to Chabad even then, and the Alter Rebbe visited there on three occasions, as detailed in the Frierdiker Rebbe’s sichos.

A photo of the painting was found by a Russian researcher, who passed it on to Rabbi Gavriel Gordon, who serves as the present-day shliach to Lubavitch and who is charged with the upkeep of its holy sites. Rabbi Gordon sent it to Rabbi Elishav Kaploun, author of a book on the history of Lubavitch, and publisher of the ‘Otzros Lubavitch’ biweekly on the history of the town.

Rabbi Kaplan published it in the most recent issue of his publication, pointing out that official paintings such as this one served as a forerunner to the modern photograph, and as such carries great significance for studying the history of the town.