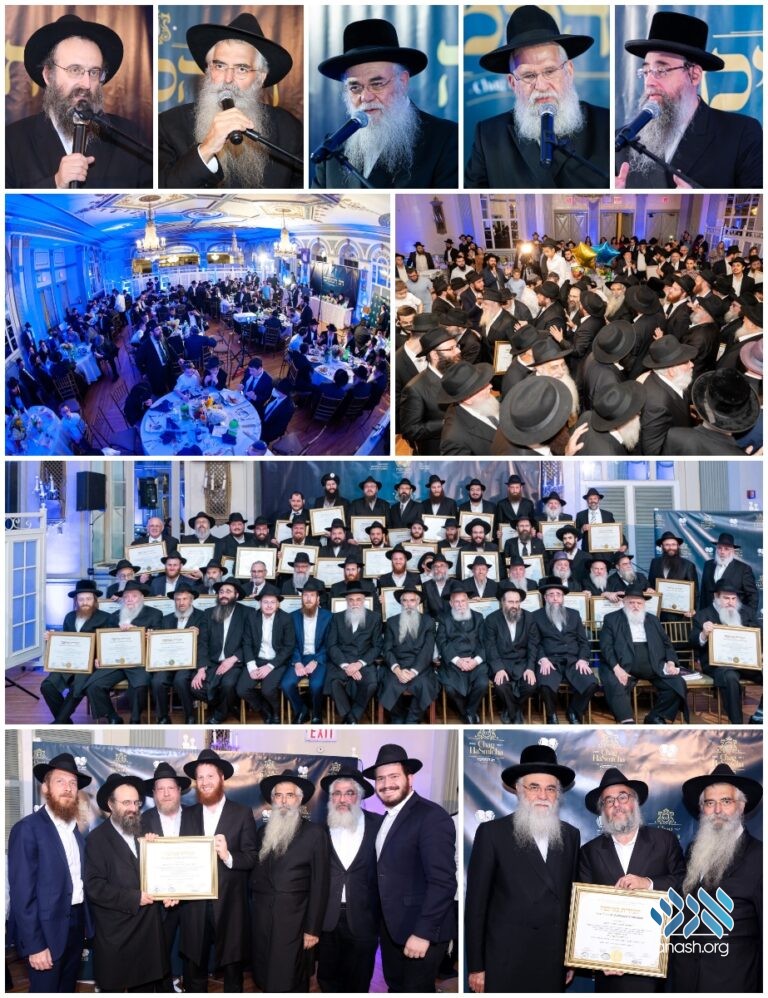 The siyum of the first class of Machon Limud Halacha – Lemaan Yilmedu was celebrated on the yahrzeit of Rebbetzin Chana, with Semicha certificates were given out to sixty talmidim who successfully completed the course.

It was an impressive event that will long be remembered by those who were there, an event that was all about k’vod ha’Torah and those who learn Torah.

Last Sunday night, the siyum of the first class of Machon Limud Halacha – Lemaan Yilmedu was celebrated. Semicha certificates were given out to sixty talmidim who successfully completed the course.

In the beautiful Oholei Torah hall, the newly ordained rabbis gathered with their families who came from near and far to share in their simcha. They were greeted with a huge sign that announced that this was a “Chag Ha’Semicha” and the excited participants filled the hall.

The event began with Rebbe’s chapter of Tehillim and then chapter 20 for the speedy refuah shleima of the director of the Machon, Rabbi Yeshaya Zushe ben Chana Rivka Wilhelm. It was particularly moving when all the kohanim present approached the dais and blessed Rabbi Wilhelm with the Birkas Kohanim.

The first speaker was Rabbi Yosef Yeshaya Braun, Mara d’Asra and member of the Badatz of Crown Heights and member of the semicha vaad of the Machon who highlighted the diligence needed to achieve semicha. He compared the learning of working men and those with families to the Shemitta year, a time when a break is taken from the usual work and the time is dedicated to Torah study.

The emcee, Rabbi Chaim Yisrael Wilhelm, then called upon Rabbi Gedalia Oberlander, rav of Beis Menachem Chabad in Monsey and member of the semicha vaad, to speak. Rabbi Oberlander expressed his astonishment over coming to test the yungeleit and seeing men who work all day and devote time to learning and reviewing what they learned and knowing the halacha well. He said it was obvious that the learning was comprehensive.

Another member of the vaad ha’semicha is Rabbi Dovid Refoel Banon, member of the beis din and dayan in the Chabad community in Montreal, who made a special trip from Canada to attend the event. Rabbi Banon spoke about the learning required of us in a way of “v’shinantom,” not just learning but reviewing the material in order to know the halacha well. Rabbi Banon said that he was amazed when he came to test the yungerleit and saw how much work had gone into the learning material and the entire program.

The emcee called upon Rabbi Yochanan Gurary, rav of Holon and member of the beis din Chabad in Eretz Yisrael and member of the vaad ha’semicha. He came especially from Eretz Yisrael to attend this significant event. Rabbi Gurary, who is familiar with the Machon Lemaan Yilmedu since its inception in Eretz Yisrael, remarked on the learning revolution it has brought about and mentioned the founder and director of the Machon in Eretz Yisrael, Rabbi Yisrael Mehl, who was also at the event. Rabbi Mehl has been the catalyst for thousands of Anash worldwide to learn halacha in a systematic fashion with a curriculum that enables anyone who is interested to achieve.

The director, Rabbi Zushe Wilhelm wished mazal tov to all those who invested their time and energy, learned, reviewed and were tested and made it to the finish line and earned their semicha certificate. Rabbi Wilhelm thanked R’ Shraga Crombie, the menahel of the Machon, for working tirelessly for the last year and a half, behind the scenes, and of course he thanked the rabbanim, members of the semicha vaad who came to test the talmidim, both the class in Crown Heights and on Zoom, and for their attending the semicha celebration.

The last to speak was a student representative, Rabbi Shimon Green of Boro Park who began with a vort on the mishna, “Today he says do this and tomorrow he says do this, until he tells you etc.” The yetzer tells a person to learn Mishnayos today. The next day, the yetzer says to learn Gemara, and so on, the main thing being that he does not stick to one subject consistently. In contrast to this, the curriculum to study for semicha demands diligence in studying the material in an organized, systematic way which is the key to success.

Then came the part of the program everyone was waiting for, the awarding of the semicha certificates. The Machon had beautiful certificates prepared with the signatures of seven rabbanim, the members of the semicha vaad (in alef-beis order): Rabbi Gedalia Oberlander – rav Beis Menachem Chabad in Monsey; Rabbi Dovid Refoel Banon – member of the beis din and dayan in the Chabad community in Montreal; Rabbi Yosef Yeshaya Braun – Mara d’Asra and member of the Crown Heights beis din; Rabbi Yochanan Gurary – member of the Beis Din Rabbani Chabad in Eretz Yisrael and rav of Holon; Rabbi Zushe Wilhelm – director of the Machon Lemaan Yilmedu in the United States; Rabbi Gavriel Zinner – posek and author of Nitai Gavriel; Rabbi Dovid Schochet – rav of the Chabad community in Toronto.

The emcee personally invited each of the newly ordained rabbis to accept his certificate from one of the rabbanim who attended the event. Everyone looked thrilled when the long-awaited moment happened and a year of learning, reviewing and being tested came to its happy conclusion.

The evening concluded with a joint picture of all the newly ordained rabbis together with the rabbanim and the hanhala of the Machon. After receiving semicha for Hilchos Issur v’Hetter, many of the talmidim are registered to learn Hilchos Shabbos or Siddur Chuppa v’Kiddushin and the learning revolution continues.

Details about the program can be found at :www.lemaanyilmedu.com