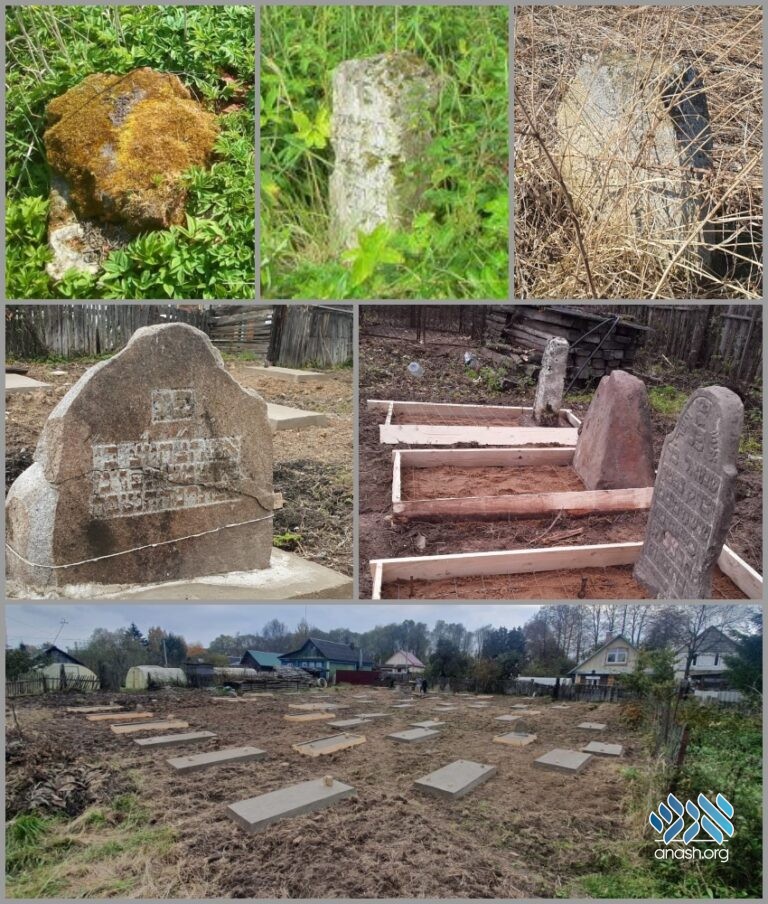 An ancient Jewish cemetery was recently discovered in Gagarin, Russia, a small town that was home to many Chabad Chassidim. Among the unearthed tombstones, was the burial place of Mrs. Tzivia Raskin, the matriarch of many Lubavitch families.

A mammoth discovery was just made, impacting hundreds of Chabad families. The ancient Jewish cemetery of Gagarin (formerly Gzhatsk), Russia, in the Smolensk region, has been discovered and is in the process of being restored.

Since 1848, the town of Gagarin, located around 110 miles from Moscow, has been steeped in rich Chassidic culture and heritage. Gzhatsk, as it is still fondly referred to in Chassidic jargon, denotes more than a geographical location.

It was a haven for uncompromising Chabad Chassidim who wished to avoid the influence of the enlightenment movement. Amongst those that resided there were the Raskin, Edelman, and Liberow families.

The first Jews to settle there were R’ Shimon and Chana Krimer, grandparents of the famed chassid R’ Chaim Betzion Raskin. Gagarin was beyond the pale of settlement so Jews required special permits to live there. R’ Shimon Krimer was a merchant of very high regard and was granted the “right” to settle in the town.

By the early 1900s, there were already a few hundred Jews living there. A big part of the community consisted of ‘’Cantonists’’. These Jewish children were conscripted to the czarist Russian military with the intention of alienating them from their own people and religion. Many of these Jewish Cantonists stuck to their faith, resisting efforts to convert them. Once discharged from the army, they returned to practicing Judaism.

These veterans were granted the right to live anywhere they wanted. Many settled in Gagarin, where they established a Jewish community. In addition to remaining steadfast in their own commitment to Torah observance, the community toiled to maintain Jewish infrastructure under the prying eyes of the communist regime. The local Jewish cemetery is where these brave residents were laid to rest.

‘’The Chabad Chassidim and cantonists’ story shows endurance, faith, courage, and revival. It is an inspiration for the Jewish people which must be kept alive,’’ said one of the organizers who discovered this cemetery.

The discovery of the cemetery stemmed from extensive familial research by Yosef Chaim Liberow. He stumbled upon an unmarked Jewish cemetery in Gagarin. To his dismay, he discovered decay, wild vegetation, and natural decomposition that resulted from decades of neglect and abandonment. In addition to the ruination created during the holocaust era, locals also looted tombstones for the use of construction projects.

There was worse to come.

Rumors began surfacing. There were plans for local development projects to, G-d forbid, be built over the cemetery. Wasting no time, Liberow formed a team to oversee the efforts to restore the cemetery.

The cemetery is the only remaining Jewish landmark in town. After locating the cemetery area and obtaining the permits, work immediately began. The last several months were spent searching, discovering, and erecting the tombstones found at the site.

During the first phase of the excavation, the burial place of Mrs. Tzivia Raskin, daughter of the above-mentioned R. Shimon Krimer, was discovered. Tzivia was the wife of Yehuda Leib Raskin from Horki and the mother of the revered chassid R. Chaim Bentzion Raskin. Tzivia passed away at the age of 45 on Chof Av 5645 (1885). The discovery of her burial site excited the many descendants of the Raskin family scattered all over the world.

Her grandson, Rabbi Yaakov Yosef Raskin, wrote many telling details about his grandmother in his diary.

My grandmother, Tzivia, would wait hours for her husband to come home from shul. She never let out a complaint or sigh. She would always tell her children, “With his davening, Tatte brings into our home the scent of Gan Eden.”

Tzivia was a great influence on her children’s education. In a letter her husband wrote to their son R. Chaim Bentzion, she added a few lines on the bottom.

“My dear son, this month, you should try to strengthen your yiras shamayim. You should request from Hashem that your spiritual toil should be good, without any evil mixed in. Do not forget — there is a big difference between life in this world and life in the next world. When we request this from Hashem truthfully, He hears and grants our requests immediately.”

If you’d like to hear more about these efforts or if you have ancestors that hailed from this town, reach out via email to [email protected]