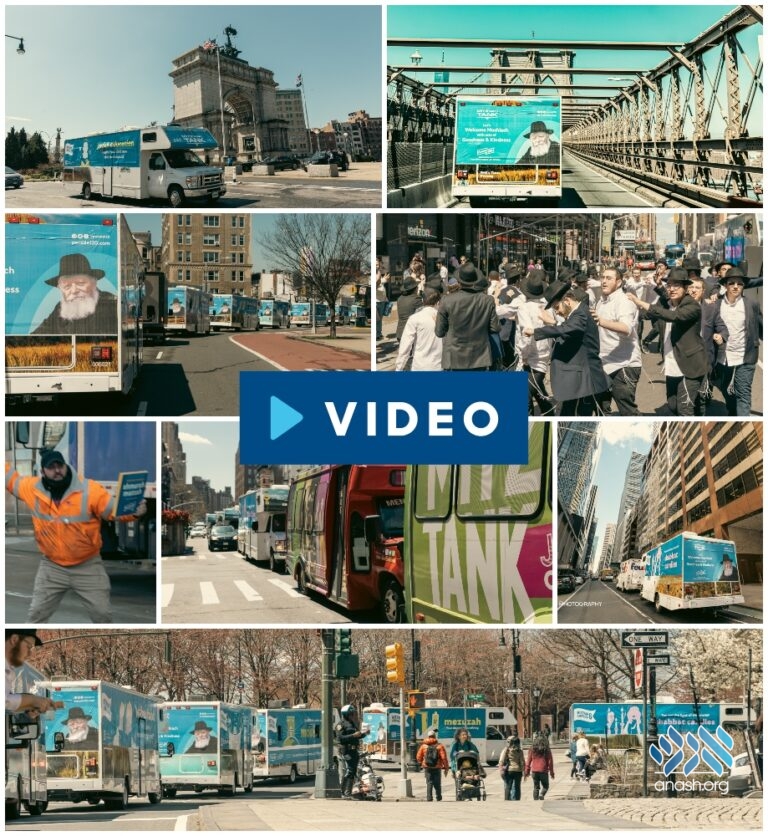 Tens of thousands of New Yorkers and tourists were reminded of the message of Pesach by an unprecedented 120 Mitzvah Tank Parade, which drove through the streets of NYC on Yud Alef Nissan, the Rebbe’s 120th birthday.

No less than 120 Mitzvah Tanks drove by 770 on Yud Alef Nissan on their way to parade through the streets of Brooklyn and Manhattan, while large crowds of onlookers cheered them on.

The parade, marking the 120th birthday of the Rebbe, was the largest Mitzvah Tank Parade in history with the sheer number of Mitzvah Tanks clearly outnumbering any previous parade. The parade also comprised of a number of video trucks playing messages about Yud Alef Nissan and Pesach, as well as two double decker busses filled with boys who had earned their spot with achievements in limmud hatorah.

Beginning in Crown Heights, the parade kicked off by passing by 770, where hundreds of children had gathered for a Yud Alef Nissan rally, and hundreds more had gathered to see off the parade.

The parade then continued to Grand Army Plaza and through the streets of Brooklyn, before dividing up and crossing all three bridges into Manhattan. Once there, the tanks split up to 120 locations where bochurim and children distributed thousands of shmurah matzahs, put tefillin on with hundreds of men, and spread the message of Rebbe’s message to countless Jews and non-Jews.