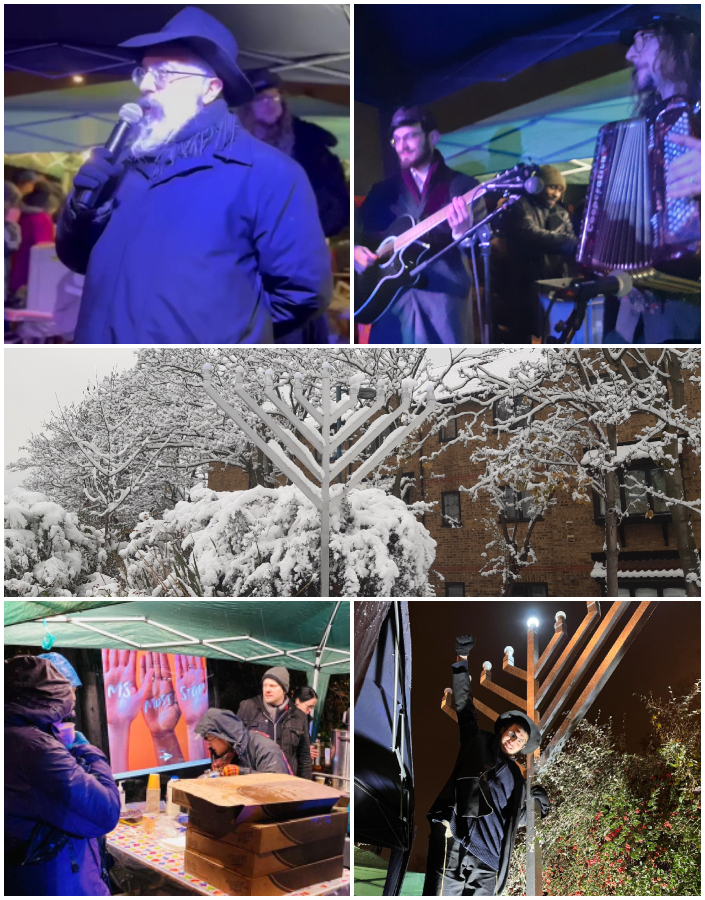 Leytonstone and Wanstead Synagogue Hosted a total of 3 menorah lightings around the London Neighborhood with many in attendance despite the rain.

For the fourth year, the Leytonstone Menorah stood at the end of Fillebrook Road opposite Leytonstone tube station in East London.

On Sunday 18th December the shamesh was lit by the Mayor of Waltham Forest, Karen Bellamy, in front of a crowd of over 300 people who sampled traditional doughnuts, latkes, and hot chocolate. East London’s premier public menorah lighting featured mystical music from the London Klezmer Band led by Yossi Davidovich (clarinet), along with Josh Middleton (accordion), Piotr Jordan (violin) and Noam Barkani (guitar). They were joined by soaring vocals from Chazzan Itzik Kohn and Rev Menasche Scharf, who also sang the Chanukah blessings as the menorah was lit for the First Night of Chanukah.

Leytonstone and Wanstead Synagogue’s Rabbi Yitzchok Austin, whose family also attended, gave a talk about Hakhel to a mixed crowd of local Shul members and visitors from neighboring areas including Walthamstow, Stratford, and Forest Gate. Various local dignitaries including Councillors and Waltham Forest Council representatives were also in attendance. Despite the relentless rain, and after a freezing week of snow and ice, high spirits were sustained throughout the Menorah Lighting event with plenty of singing, socializing, and dancing.

An eighth-night lighting also took place in Orford Road in Walthamstow Village, close to Leytonstone partly using funds raised by Levi Austin the son of Rabbi Yitzchok Austin of Leytonstone and Wanstead Synagogue in London E11 4AT. Many local Jewish people happily attended this event very unexpectedly and there was much celebration as the menorah was lit!

Althogether 3 menorahs were lit around the city in Leytonstone Station, Leytonstone Tesco, and Walthamstow Village