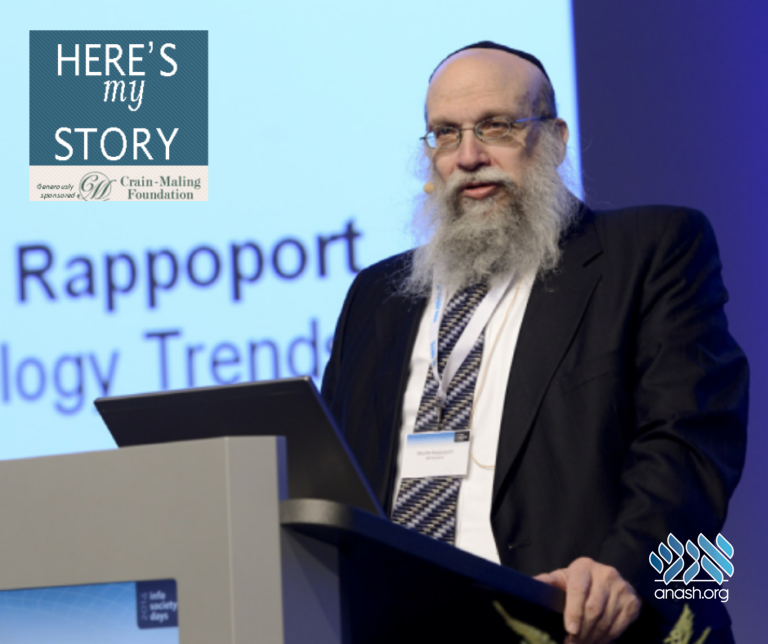 Here’s My Story: When Mr. Moshe Rappoport wanted to quit his job in high tech and become a full-time shliach, the Rebbe responded with one word.

For more than forty years, Mr. Moshe Rappoport worked in the world of hi-tech. Presently he teaches in a religious girls’ school in Zurich, Switzerland, where he lives. He was interviewed by JEM’s My Encounter team in December of 2018.

When I started leaning in the direction of Lubavitch, my father opposed me changing my religious customs, including which prayer book I would follow, and I arranged my first private audience with the Rebbe to ask him what to do. This was in 1970, when I was eighteen years old. I explained that I was a descendent of great chasidic rabbis of Poland and had always prayed in their style (known as nusach Sephard) but I wanted to start to pray according to the Lubavitch custom (known as nusach Ari).

There are some Lubavitchers in our family tree and, living in Crown Heights, we always had a close relationship with Lubavitch, but my father clung fiercely to the customs he learned in childhood as a Radomsker chasid and he did not want me to change my ways.

The Rebbe’s response proved very wise in that it prevented discord in the home: “Since your family’s customs are also based on the teachings of the Ari’zal [the great 16th century Kabbalist], it’s advisable that you continue to keep them and that you pray according to nusach Sephard.”

So this is what I did for several years until my father accepted that I was a Lubavitcher through and through, and eventually he was quite happy about it. At that point, the Rebbe advised me to switch to Chabad customs.

Fast forward to the time that I married Judith Sternbuch, a Jewish girl from Switzerland and, having started a family, needed to make a living. Due to the Arab oil embargo in the early 1970s, the American economy came to a grinding halt and the job market was scarce. I had just obtained a college degree in computer science and my father-in-law urged my wife and me to come to Switzerland where the recession hadn’t hit yet and where he had lined up job interviews for me. I wrote to the Rebbe asking his opinion, and he answered, “Since you have many prospects, it will certainly work out.” I took his word as a promise and I went to Switzerland for the interviews.

In those days in Switzerland, a religious Jew couldn’t wear a yarmulke at work – is was not considered acceptable to wear a religious symbol at the office. But how can a chasid not wear a yarmulke? So I didn’t take it off, and I actually got the job – at the 3M Company – because of it, as the person who interviewed me owed a debt of gratitude to a Torah observant Jew. Later, my wearing a yarmulke on the job proved very important in how I was able to fulfill my assignment as the Rebbe’s emissary in the hi-tech world.

When we were moving to Switzerland, my wife and I went to see the Rebbe to ask for a blessing for safe travel. The Rebbe gave us the blessing, adding that – since my wife, who was pregnant at the time, was going to fly to Zurich with a stopover in Montreal – she should ask her doctor if this was advisable, or if it was better to fly direct.

The Rebbe’s comment was unexpected, but of course we asked our doctor, who said that he saw no problem with our flight plans. However, since the Rebbe brought up this point, he decided to err on the side of caution. So we purchased a non-stop ticket for her, and she arrived safe and sound.

A short while later, I myself flew via Montreal, where there was a heavy snowfall. As the plane couldn’t take off, I had to stay over in a hotel, and that is when I learned that three weeks prior – just when my wife would have been flying – there was such a severe snow storm in Montreal that, due to flight delays, passengers ended up having to sleep on the floor at the airport. Clearly, not something a good experience for a pregnant woman. But the Rebbe’s advice spared her that ordeal.

After some time working in Switzerland for 3M and then IBM, I wrote to the Rebbe to ask if I should quit and become a full-time Chabad emissary instead. The Rebbe’s response to my question about quitting was just one word: “Why?”

I understood – there was no need for me to give up my job to be an emissary; the Rebbe wanted me to stay and fulfill my mission in the workplace, which is exactly what I did.

I had started out doing normal computer stuff, but as time went on, I went into research and ended up building an IBM center in Switzerland where important people, CEOs, politicians and famous journalists from all over the world came to find out what IBM was doing. I did that for twenty years, and everyone I met who saw my yarmulke and my full beard, saw the face of a Torah Jew. In my position, I also traveled all over the world, where other Jews approached me and I was able to influence them positively. This would not have happened had I not followed the Rebbe’s advice to stay in hi-tech.

I consulted the Rebbe on many other issues as well. When, in 1991, one of my children needed a serious operation, I wrote to the Rebbe to ask for a blessing.

With a bit of apprehension, I awaited his response because I knew that the Rebbe would not answer under certain circumstances. I discovered this years earlier when my grandfather had collapsed on the street one Shabbat and was rushed to the hospital. My father went with him, while I went to seek out the Rebbe to ask for his blessing. I approached him as he left his office but when I made my request, the Rebbe didn’t respond. He just inclined his head. I only understood his reaction later – while I was talking with the Rebbe, my grandfather had already passed on from this world.

This time the Rebbe responded “Azkir al hatzion – I will mention it at the gravesite,” referring to the resting place of the Previous Rebbe where he often went to pray. This was a “standard” answer that the Rebbe often gave, and I must admit that I wasn’t so happy with it because it didn’t sound like a full-throated blessing for a successful operation or for a speedy recovery.

The Rebbe also added his advice: We should get a second opinion. We consulted with another doctor, even though it wasn’t an acceptable thing to do in Switzerland in those days, but his verdict was the same – an operation was a must.

The Sunday before it was to take place, my mother decided to implore the Rebbe again, hoping for a more direct blessing. She stood in line as he was handing out dollars for charity and, when her turn came, she broke out in sobs, “My grandson needs an operation…”

“I already answered your son,” the Rebbe responded, “It will be fine.”

She calmed down, but as she walked away, she thought: “I never even said who I was, and the last time I saw the Rebbe was almost twenty years ago. How did he know that the person who wrote to him for a blessing was my son?”

The operation was successful and my son not only recovered but was fully healed. When the Rebbe said “Azkir al hatzion,” he meant it as a real blessing. We had not needed to worry at all.