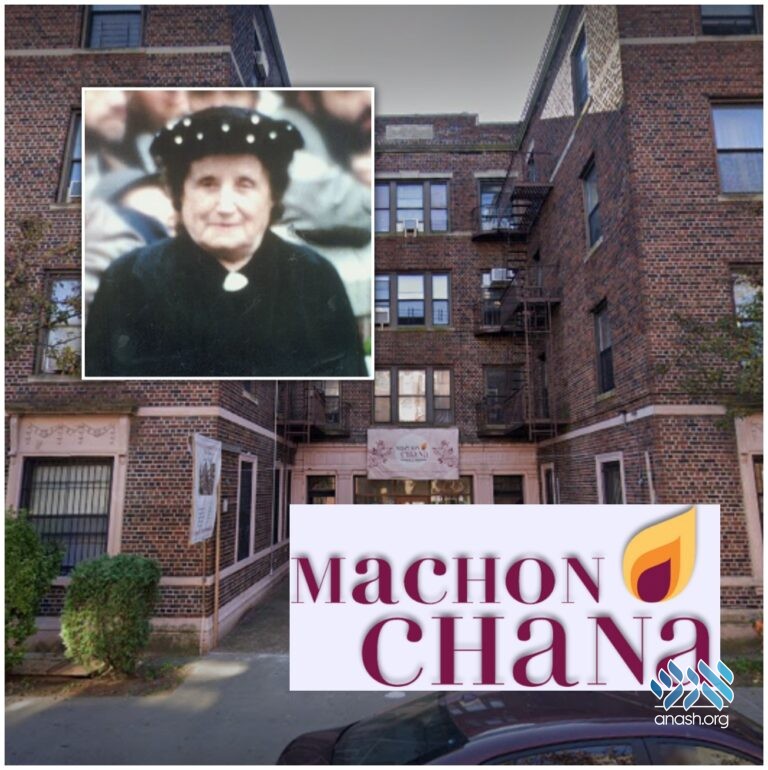 50 years ago, the Rebbe selected the first baalas tshuva yeshiva in the world to carry his mother’s name, and called the students “meine techter” – my daughters. On Rebbetzin Chana’s yahrzeit, help the yeshiva expand.

For all chassidim, Vov Tishrei is a most auspicious day. It is the yahrzeit of our beloved Rebbetzin Chana, the extraordinary woman who merited to bring forth our holy Rebbe.

For the tens of thousands of women who attended Machon Chana during the past 50 years, this day is particularly significant and holds a special place in the hearts of those who were blessed to walk through the doors of the Rebbetzin’s home.

The Rebbe chose to name the first baalas tshuva yeshiva in Chabad after his beloved mother. He specifically selected this institution to eternally memorialize his mother’s fine memory; he desired that her exquisite middos would be instilled in all the girls who came from far and near to transform themselves, and in turn those daughters would continue and expand his mother’s most precious, treasured legacy.

The Rebbe called the girls who attended the school – “meine techter” – my duaghters, and throughout the years he made a point to visit his techter and encourage their development, requesting that everything connected with the home and school be in אין גאר גרויסן פארנעם . The Rebbe chose the buildings and helped purchase them and wanted them beautiful and comfortable specifically with all of his daughters in mind.

One year the Rebbe took a walk through and after having inspected every room, asked, “Where are the mirrors and radios?” He expressed disappointment with the with the chandeliers bought and asked if more appropriate ones could be chosen for his mother. He requested that his mother’s daughters be treated royally and be served with authentic silverware instead of plastic. Each daughter was to be given her own becher on Pesach. He also suggested that doors be strategically hung between the dining room and the living room in order to provide his daughters with greater privacy for their studies.

Each year the Rebbe requested pictures of his daughters and sent them lekech on erev Yom Kippur with a blessing for a good and sweet year. He sent matzas every Erev Pesach along with a bracha for a koshere and freiliche Pesach. He sent money for Pesach to ensure the school remained open during Yom tov, and inspected the kitchen on his yearly Pesach visit, asking the cook if her cooking was “home cooking.” The Rebbe did not want his daughters fed institutionalized food, only the benefits of a home cooked meal was befitting his mother’s name and his daughters .

After visiting numerous other institutions on the first Seder night, the Rebbe proclaimed as he approached Machon Chana, “Now i am going home!” The Rebbe explained “Since the girls are following in my mother’s footsteps, my mother’s presence is always there.”

The Rebbes special love and closeness to everything connected with his mother  is well known. The Rebbe was upset when a fundraiser was held for Machon Chana together with another institution and explained it was a dishonor for his mother, for her mossad was important enough by itself. And when Anash was not supporting the institution – the Rebbe cried “?איפה היו המקושרים אלי” -Where were those who consider themselves my mekusharim (connected to me), underlining the word אלי to me with three lines for emphasis.

The Rebbe loved Machon Chana and treasured all his daughters. It was important and essential to the Rebbe that everything was provided on the highest standard both in ruchnius and gashmius.

He once admitted publicly by a farbrengen, “Whoever suspects me of being biased – נוגע בדבר – to Machon Chana is right, it’s my mother’s mossad.”

Rebbitzen Chana is undoubtedly proud of her tens of thousands of daughters and their beautiful families. But we want to do more..

In honor of Rebbitzen Chanas yahrzeit, help a co-worker, a student, a neighbor, a mekureves to join yeshiva. Introduce them to a class online , winter or summer yeshivacation program and give them the gift of Torah and the great zchus of joining the Rebbitzens family. Give Rebbitzen Chana more daughters.’