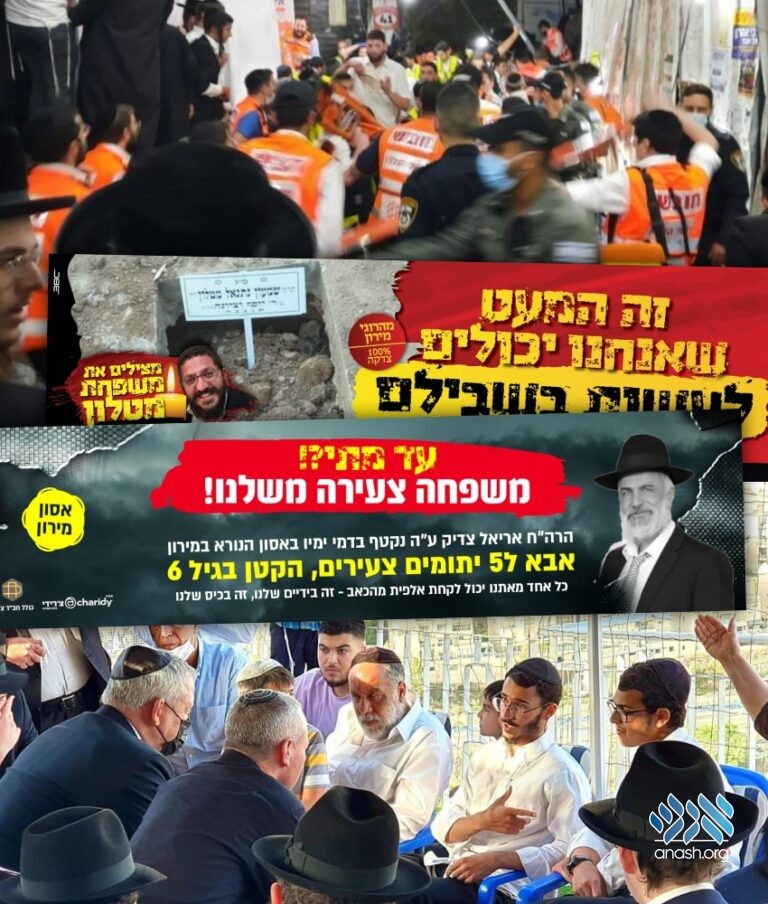 Rabbi Ariel Tzadik and Rabbi Shimon Matlon, both pillars of their community in Eretz Yisroel, were lost in the Meron tragedy. Their families need your support.

Rav Ariel Tzadik quietly and humbly was a pillar of the Chabad of Bayit Vegan Community in Jerusalem.

His neighbors knew him as a warm, loving chassid who would step up to help anyone in need of aid. The Chabad at the Kosel knew him from his taking part every week of the year in their Teffilin campaign no matter the weather or the time of year.

For his family, Rav Tzadik was much more than the breadwinner. He was his family’s pillar, both for his wife and for his 5 children. A dedicated father and incredibly supportive husband.

It is almost impossible to imagine that he has gone, our hearts refuse to believe, and our tears refuse to stop flowing. Last Thursday, in the incredible tragedy which took place in Meron, we lost Rav Ariel. He left this world straight to heaven, with 44 other pure souls whose only wish had been to serve hashem.

His wife and 5 children are broken. They remain here with us, without their father to rely on, and without his loving support.

We cannot take their pain from them or bring back to the 5 children their father. But we can help ease their suffering. Each of us can ease part of their pain by providing for their needs, so that they can know that they are at least financially taken care of.

Please take part in this special Mitzvah, please donate generously for his wife and for his 5 children.

“There’s a little boy here, save him! It’s more important.”

These were the chilling last words uttered by 37-year-old Shimon Matlon moments before he was crushed to death in the Meron disaster.

Shimon was from Beitar Illit. His friends describe him as a great and beloved teacher, a generous man whose face would light up the room when he smiled.

“He was a father to his children and his students,” said his brother-in-law, Leor Refaeli. “He was a person who was dedicated to education, chesed and was loved by members of the community.”

That was how Shimon lived. And this was how he died as well. Shimon put a little boy’s life before his own. A boy that he didn’t even know. That was simply the kind of man that he was. Now that he is gone, Shimon’s wife and eight little children are inconsolable. They have a long and difficult journey ahead of them, one that they will walk without his constant love and support. Shimon’s wife now faces the terrifying challenge of raising their eight children all on her own. Donations will provide Shimon’s widow and eight young orphans with much-needed financial relief for the years to come.

Please take part in this special Mitzvah, please help bring a smile to the faces of a widow and 8 young yesomim.