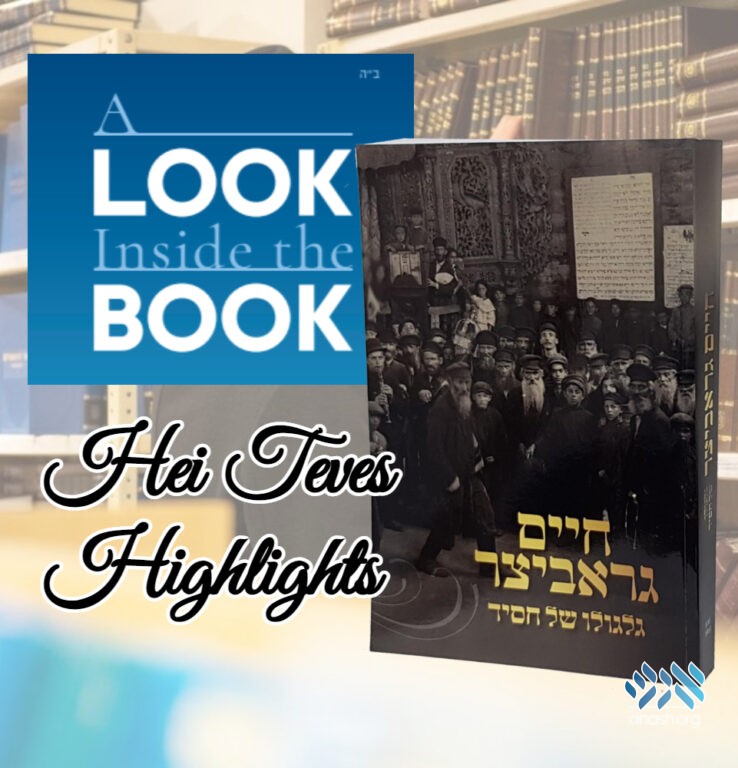 This special installment of the “A Look Inside the Book” column will review standout titles from this past year in the areas of history, halachah, renewed classics, and fiction.

For decades, Chaim Gravitzer was a book quietly passed from hand to hand in Yeshivos. This was a unique book: about Chassidim and Chassidus, but not written by an active chasid and not necessarily reflecting Chassidus the way a mashpia would. As a result, Chaim Gravitzer occupied a unique space, not authorized literature, but not outright contraband either.

Now, with a new edition of Chaim Gravitzer, Machon Hasefer—headed by Chabad rov R. Avraham Alashvili—seeks to take this book out of the shadows, and put it on the table with a hechsher. What is Chaim Gravitzer, and is the decision to produce an “authorized edition” a wise and successful move?

Alongside his publications about psychology, Fishel Schneerson also wrote historical novels, with a deep psychological angle to them. His most famous work is Chaim Gravitzer, originally written in Yiddish, and later translated to Hebrew by Avraham Shlonski, another writer from a Chabad background.

Chaim Gravitzer is a work of historical fiction set in the period of the Tzemach Tzedek, telling the story of a fictional character named Chaim Gravitzer. Gravitzer is an intellectual and emotional giant of Chassidus, with a passionate and all-consuming belief of ein od milvado, But Gravitzer’s emunah is shaken by the tragic death of his son, and he becomes a nofel, a “faller.”

This is not a fall from belief in Hashem and a commitment to Torah and mitzvos, but from the all-encompassing way in which he had lived Chassidus and the concept of ein od milvado. As a result, Gravitzer leaves his home and the chatzer of Lubavitch, and wanders through the Jewish world, encountering and experiencing the worlds of non-Chabad Chassidus, Haskalah, and the Yeshivah of Volozhin.

The uniqueness of Chaim Gravitzer is the way in which Chabad philosophy, history, practice, and community, are illustrated in rich and intimate detail, and the deep penetrating psychological depiction of the internal life of a chasid, with all of his passion and struggles.

Worthy of special mention is the vivid description of the chatzer in Lubavitch during the Tzemach Tzedek’s later years. Many of the details of this incredible depiction, which was certainly informed by family traditions, have significant parallels with traditional Lubavitch sources.

But Chaim Gravitzer is not a book written by a practicing chasid, and doesn’t necessarily reflect the way Chabad is traditionally internally perceived. Moreover, the book has no “happy ending,” as its hero’s wanderings never reach a resolution.

The message of the book thus remains ambiguous. Some mashpiim are therefore critical of the book, interpreting its message as being that the beliefs of chassidus are not compatible with real-world life. As with any true literary creation, this is of course not the only possible way to read the book.

In order to produce an “authorized edition,” Machon Hasefer’s new edition censors parts of the book inappropriate for Chassidishe audiences. While these are only a small number of paragraphs, censoring a literary work is a highly questionable endeavor, especially when they are part of a key scene in the book.

The introduction to the Machon Hasefer edition, edited by Mendi Bronfman, informs readers that they have edited the book to bring its sometimes outdated Hebrew up to date, however the more controversial issue of censorship is not explicitly acknowledged.

The publisher believes that—after a little censorship—Chaim Gravitzer is a worthy book for Chassidishe audience, due to its beautiful portrayal of Chassidic life and philosophy. To resolve the ambiguous non-conclusion of the book, an editorial afterword has been added, attempting to frame Chaim Gravitzer’s experience as the result of a subtle misunderstanding of the message of Chassidus.

The book’s conclusion describing Gravitzer’s work on behalf of the cantonists forcibly drafted as children into the Russian army is creatively reinterpreted in the afterword as a happy ending, where Gravitzer reaches the ultimate meaning of Chassidus as striving to create a dirah betachtonim, through the shlichus of being mekarev Yidden to Torah.

The editors of the new edition have done a good job adding many footnotes to the book, referencing the maamarim from where the deep Chassidus presented in the book is drawn, and parallels and contrasts to the Chassidishe stories and minhagim described.

Chaim Gravitzer is an incredible and unique literary work, and the new edition renders it appropriate for Chassidishe audiences, at least on a basic level. The wisdom of the endeavor to “kasher” this work, and the question of whether the subliminal messages it may transmit are indeed desirable, should be posed to knowledgeable educators and mashpiim.

Chaim Gravitzer can be purchased here.