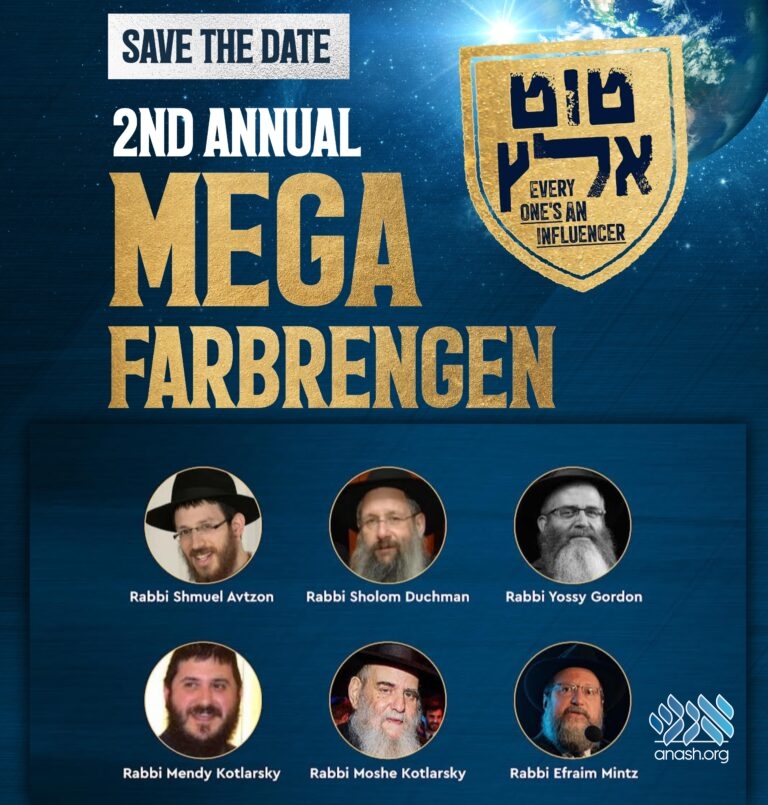 At the upcoming Mega-Farbrengen held in honor of 28 Nissan, leaders and directors of many Chabad Central Institutions will farbrengen with the global Chabad community.

Chabad’s global influence is the combined work of thousands of shluchim and shluchos, each nurturing their own community. Working quietly in the background, Chabad’s institutions provide educators and shluchim with resources that allow the shluchim to increase their reach, and be even more effective as educators and  influencers.

At the upcoming Mega-Farbrengen held in honor of 28 Nissan, the leaders and directors of many of these institutions will farbrengen with the global Chabad community. As the Director of Chabad on Campus, Rabbi Yossy Gordon has overseen a revolution in Jewish life on College Campuses. He’s seen the myriad small ways that Campus shluchim have touched the lives of Jewish students. At the Mega-Farbrengen he will share insight into some of the ways we can all influence the people in our lives.

Rabbi Sholom Duchman, director of Colel Chabad, will also lend his perspective to the farbrengen’s theme; everyone’s an influencer. Throughout the twenty-four hours of the virtual farbrengen, Rabbi Shmuly Avtzon will speak, addressing the lessons he’s learned as director of Sichos in English, and making the Rebbe’s teaching accessible to a larger audience. Rabbi Efraim Mintz, Executive Director of the Rohr Jewish Learning Institute, Chabad’s Adult Education arm, will address the theme of the farbrengen as well.

For Rabbi Shloime Naparstek, director of the Moshiach Office, the presence of the directors at the 28 Nissan Mega-Farbrengen is meaningful because it reminds us of the power we all have. “In a sense every person can become a Mosed in their own right,” he says, “we can think of the tools we can build to bring a positive influence to the people around us.”