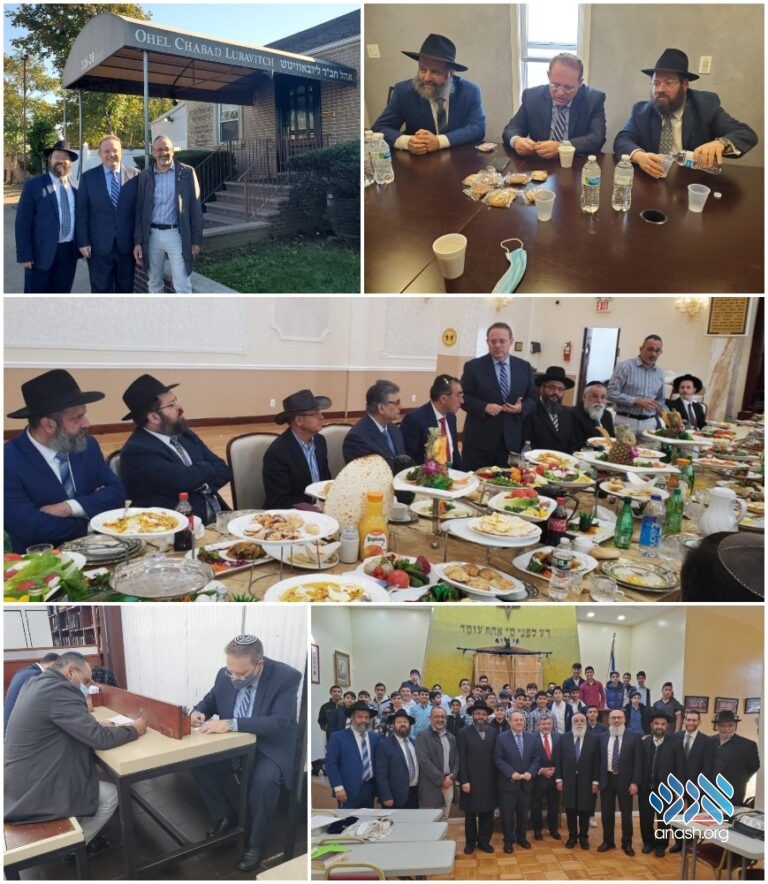 Yaakov Hagoel, the Acting Chairman of the Executive of the Jewish Agency, visited the Rebbe’s Ohel this past week in his first such visit in his current position. He also visited the shuls of the Bucharian community, and the schools founded by R’ Levi Leviev.

Yaakov Hagoel, the Acting Chairman of the Executive of the Jewish Agency, visited the Rebbe’s Ohel this past week in his first such visit in his current position. He came to the site in Cambria Heights to pray for the success of his prestigious role to which he was appointed this year, following the appointment of the former head of the Jewish Agency, Isaac Herzog, as president of Israel.

Mr. Hagoel is well acquainted with Chabad from his previous positions, having served as Chairman of the World Zionist Organization, Executive CEO of World Betar, and Chairman of World Likud.

He was accompanied to the Ohel by the Rebbe’s Shluchim to Queens, Rabbi Zalman Zvulonov and Rabbi Levi Yitzchak Wolowik. He shared with them his warm feelings for the tremendous work of the Rebbe’s Shluchim throughout the word — who are often active in places which are unreachable by the official institutions of the State of Israel.

“In all my roles and in my many years of serving the community,” he said, “the organizations in which I have been active have always had a strong recognition and sense of appreciation for the heroic and historic role of the Shluchim in strengthening Jewish identity and Jewish tradition among the Jews of the Diaspora and the Jews of Israel, as well as their role in combating antisemitism.”

In the morning of his visit, Mr. Hagoel found time to pray the morning services in the beautiful sanctuary of the Bucharian Jewish Community Center not far from the Ohel, where he had the opportunity to be amazed by the phenomenal engagement of Rabbi Asher Venkin with the next generation of the community.

In the early hours of the afternoon, the guest and his entourage — which included Mr. Refael Cohen, the foreign-affairs director for the World Zionist Organization — were given a special tour of the campuses which make up the educational empire of Jewish Queens founded by famed philanthropist Levi Leviev.

One after another, the guests were witness to the successes of the Ganeinu Academy preschools, elementary schools for boys and girls, the Bukharian Chai Center highschool for boys, Or Chana highschool for girls, and more. Rabbi Shmuel Kagan, Shliach and educational director of the institutions, showed the guests the spacious classrooms and the most up-to-date equipment. The students at the schools made an indelible impression.

The school is currently working in full gear to prepare for the yearly dinner which will take place on Chanukah this year, which will, with Hashem’s help, allow the institutions obtain additional buildings to meet the needs of the stream of new students which constantly apply, in light of the amazing name the institutions have gained for their strong Jewish and secular education.