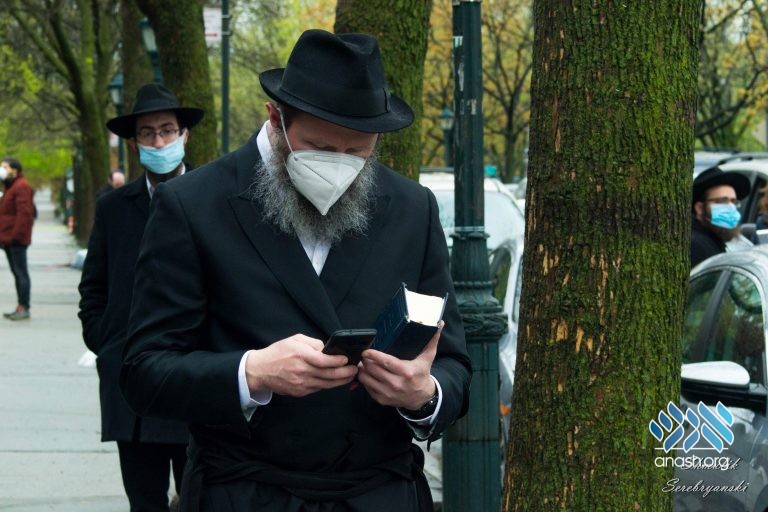 OpEd: Many have been asking the Rabbonim here in Crown heights, “Everyone got it already!”. “It’s already too late! So why the whole lockdown?”  The answer they responded was, that if we can save even one Jew, we will. What does that say to us in the bigger picture?

It happened just recently, right after Purim as I was walking down Eastern Parkway, making sure to be “COVID-safe”, with my stuffy and sweaty mask and gloves. This was when Crown Heights was at the peak of its danger-time. To my shock I see some young boys congregating together outside 770, without any of the precautions, laughing and joking together as if life was just regular.

“Don’t worry! We know all about the corona,” they responded to my astonishment, “it’s nothing. You lose your sense of smell and maybe a headache.” My sister had it,” the tallest boy retorted, “I’m telling you! Don’t trust everything they tell you..”

The rest of the conversation went something like this:

Me: “Are you crazy? Do you know Levi Goldstien is on a respirator, fighting for his life? Do you know how many levayos there have been, r”l?”

The tall guy: “Eh, it’s only dangerous for old people, or guys with weak immune systems…”

Tall guy: “No, but why should I be locked up in my house? I’m not going near them.”

Me: “But don’t you understand? When you congregate and make minyonim, you are enticing these older or weaker people to go out and damaging their lives, can you allow their blood to be on your guilt?”

Tall guy: (with a shrug of shoulder:) “It’s their fault for not being responsible… (Sarcastically) Anyways, what are you doing outside? Didn’t you hear, it’s dangerous to be outside. You might get “The Corona”. Hurry up, run inside”…

The rest of the group burst out laughing. I tried explaining to them that actually I do generally stay home, I only ventured out for some much needed groceries, but it fell on deaf ears.

My phone battery had died, so walking home, I had some time to think over this appalling encounter, and the teaching of the Baal Shem Tov came to my mind:

“When you see something in someone else that irks you; know that this world is a mirror.”

What could I be doing, that even slightly compares to this irresponsible behavior?

I got home. I took out my phone to charge – And then it hit me. Like a ton of bricks.

I am a big believer that everything that Hashem made is for his glory. Including television, radio, and of course internet and the smartphone. These are all tools to spread Torah and mitzvos and Hashem’s greatness in immeasurable amounts. This is the only reason they were created.

They certainly were not created to allow the exact opposite of that into yiddishe minds and hearts.

And here’s the connection with the virus.

I have a good filter on my phone, and I would like to think of myself as a responsible person that can control himself from getting too ‘sick’. (Although I will admit that I might have lost a little of my sense of taste and smell for ruchniyus in recent years…)

But, how many people do I know personally, that are dying from the dangers of the smartphone?

How many people, boys and girls – no difference, do I know, would have had the best lives, Learning, davening, serving Hashem. I know their type. Happy people, talented people. There is no reason in the world that they should be where they are today: Wasting away, spending hours upon hours absorbing the lies that the goyishe world has decided to brainwash the universe.

I am sure every one of the readers can make a similar statement about people they personally know. Natural, healthy yidden, hooked onto their ‘respirator’ charging from the wall….

[I don’t think there is a need to mention the damages that our community is suffering. Besides for the famous blatant issues, I don’t think there is any concepts in yiddishkeit and Chassidic mindset that hasn’t been warped by this new wave of goyishkeit that has seeped into our homes. Some of the results can be seen with attitude to university, recreational drugs, emunah in accepting Hashem’s decisions, family planning, tznius etc. and the list goes on.]

Now, if from a small chance of physical death we are being so cautious, let’s just remember that what we were taught by our holy Rebbeim that spiritual death is immeasurably worse than physical death!

Yes, perhaps these are people with weak support systems, with underlying spiritual diseases, but can I stand by and allow these weak people to die? Am I perhaps just like those boys on Eastern Parkway, as I shrug my shoulders, not willing to leave my comfort zone, knowing that their blood may be on my hands?!

Now, maybe I should throw my phone away, and go back to a simple phone, or maybe not. Maybe I need a smartphone. For my family. For my business. For my parnossa. For my Shlichus. That’s a question for everyone to ask their own personal Rov and Mashpia.

So why am I writing this article?

Because: Although COVID-19 is a deadly virus, no one has told us not to go to the grocery. What have the Rabbonim and doctors told us? “Be aware!” Understand that this is not a joke. Only leave the house when absolutely necessary. Realize that lives are at stake. If you must go out, take every precaution to minimize the risk. Even if that involves uncomfortable, stuffy and ugly masks.

If, after discussing with your Rav, you have realised that you need a smartphone, for whatever reason, know the dangers, and that you are taking a risk. If you use it, make sure it’s “essential”, and even then, know and be aware of the ramifications.

Just as every person that wears a mask in the street is actively causing others to wear masks too, who will cause others to follow suit etc. and therefore saving lives. (Unfortunately, the opposite is true as well.)

So too, even when we do use the internet, the more we walk around with clearly kosher phones, uncomfortable and ugly as they may be, we show people that there is a danger that we have to be wary of. We show those that may look up to us, that we must also take precautions, it isn’t anything to be ashamed of and is actually something to wear with pride.

Unfortunately, since the virus was so new, the doctors were given wrong information, and many suffered as a result. I don’t blame the health care system, or anyone. This was something so new and unclear.

So too, I don’t blame any of those well-meaning but unfortunately clueless parents who have unfiltered internet in their houses, and would never dream what their children are up to. Until it’s too late.

Yes, although all the Rabbonim, (just like this virus) in the entire world, all the Rabbonim, have warned and preached about the dangers of the internet. I still don’t blame anyone. Because it’s so new and different, that some people…. just don’t get it. But the numbers of korbonos are rising every day r”l. And it’s time we wake up.

Many have been asking the Rabbonim here in Crown heights, “Everyone got it already!”. “It’s already too late! So why the whole lockdown?”  The answer they responded was, that if we can save even one Jew, we will.

Obviously, the same goes for our subject. If one Jew will be clean from all the nonsense and narishkeit of the world and will be able to live like they really want to live, without filling his mind and heart with filth and goyishkeit, it will be all worth it.

Finally, just as it is so very clear to everyone, that this whole world-turn-around is the final step before Moshiach, so too it is very clear that this nisoyon of the yetzer hora is the final nisoyon before the Rebbe’s complete hisgalus. If we realize that we are moments before the hisgalus, things become clearer, and easier to get ourselves ready.

But, one thing, don’t be complacent. Do something! Whatever your mashpiim and rabonim advise! Let’s get our act together. For ourselves, for our community, and for our children.