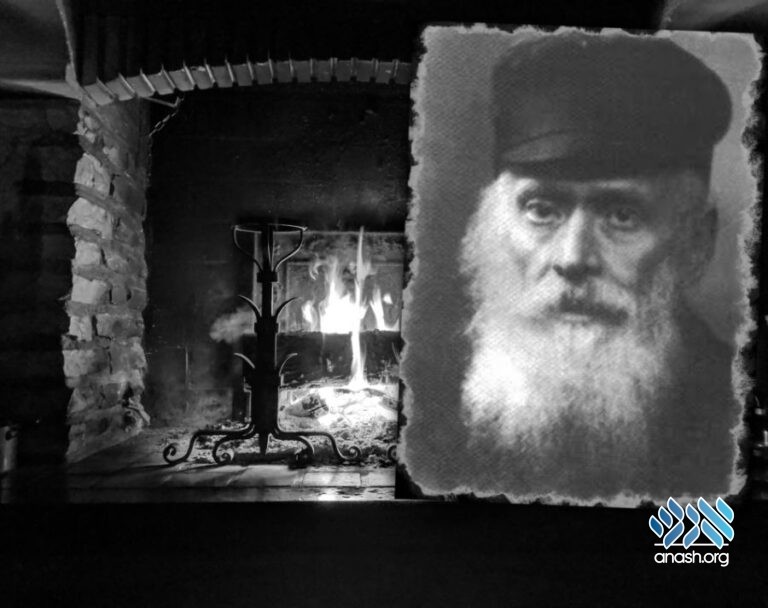 Dedicated to his children’s chinuch, R. Benche Raskin fought the Haskala in his hometown, moved to another city, and early each morning he recited Tehillim and brachos with tears, pleading for ehrliche children. The result: The large Lubavitcher Raskin family.

R. Chaim Bentzion (Bentche) Raskin (5624-5699) was born in Dubravna, to a family of chassidim going back to the time of the Alter Rebbe. After his marriage, he lived in Rudniya, near Lubavitch, and was a chossid of the Magen Avos of Kopust. After the passing of the Kopuster, he became a staunch mekushar to the Rebbe Rashab, and later the Frierdiker Rebbe.

R. Benche was known for his incredible dedication to the chinuch of his children. As a result of his mesiras nefesh, R. Benche merited to raise Chassidishe children in very trying times, and he is the patriarch of the large Lubavitcher Raskin family.

Wishing to check out Lubavitch, R. Bentche spent a Shabbos with the Rebbe Rashab in datche. He later shared three things he saw that captured his heart: the Rebbe’s care in netilas yodayim for the seuda, a niggun dveikus he heard the Rebbe sing, and the Rebbe saying the maamar. From then on, he was a Lubavitcher chossid.

His children’s chinuch was R. Bentche’s life. For the first ten years after his marriage, he lived in Rudniya, a town near Lubavitch with a chassidishe bent. But the haskala reached that town too, and local youths began to promote secular ideals. When they tried to open a haskala school, R. Bentche and R. Boruch Shalom Kahan opposed it intensely, even throwing the desks out of the school building. Their efforts were successful and the school did not open.

But R. Bentche was still concerned about his children, and decided to relocate. He chose Gzhatsk (Gagarin), a town that was been outside the Pale of Settlement, and therefore comprised almost completely of non-Jews, from whom he wasn’t afraid his children would learn.

In Gzhatsk, he immediately established a chassidishe cheder. In hiring a melamed, he had to choose between one who had intense yiras Shomayim but read with a “Poilishe” pronunciation, and a successful teacher with Lubavitch-like Russian pronunciation of the words, but didn’t excel in yiras Shomayim to the same degree. The Rebbe Rashab told him to choose the first candidate, since the most important factor in choosing a melamed is yiras Shomayim.

R. Bentche would rise each day at 4 am and read Tehillim with great emotion and tears. When he would recite birchos haTorah and come to the words, “v’nihyeh anachnu v’tze’etzaeinu” – “may we and our children know Your name,” he would say those words with intense concentration and feeling.

In the middle of a farbrengen in Leningrad, the Frierdiker Rebbe once said, “There’s a Yid living near Moscow who wakes up at 4 o’clock each morning. He reads Tehillim and cries, and begs Hashem that his children and grandchildren should be ehrliche Yidden.”