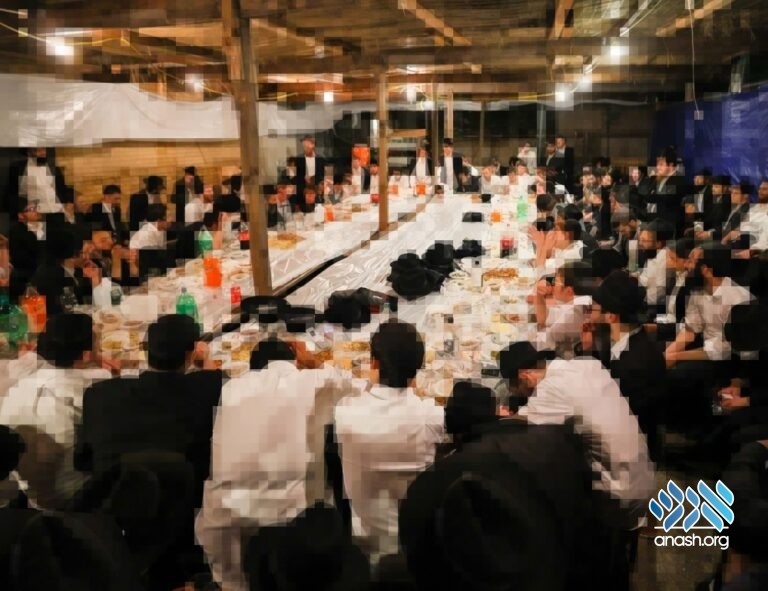 OpEd by Rabbi Gershon Avtzon: Tishrei is always an exciting time in Crown Heights, and bochurim can benefit from many uplifting farbrengens. But there is one thing which can ruin many a good farbrengen.

As an introduction: You are entitled to honesty and transparency: I have thought about writing this for a few years now, but hesitated as I felt that you the reader might feel that this is just a “self-serving” promotion. As time passes, I realized that if I remain silent – and the issue persists – that I must include myself in those that are perpetuating the “pollution and not the solution”.

Tishrei is always an exciting time in Crown Heights as thousands of guests (boys and girls) come to spend this special month in the “daled amos” of the Rebbe. This is especially true this year, 5783, as it is a Hakhel year as well. That means that more groups of young chassidim, as well as families, will be coming for (at least) part of Tishrei to be with the Rebbe.

Besides the Tefillos and learning in 770, visiting the Ohel, and being immersed in the general atmosphere of “Tishrei with the Rebbe”, the real opportunity for excitement and growth are the many farbrengens that the bochurim attend. There are many inspiring educators and shluchim that also come to crown heights for parts of Tishrei and sitting at farbrengens with a “different face” (that their usual mashpia) can be very uplifting.

I emphasize the word “can” because – as someone that has been watching this for nearly twenty years – I have noticed a pattern: The talmidei hashluchim of a yeshiva work tirelessly to arrange a farbrengen (that usually includes arranging a host, farbaisen and a guest mashpia) and then one of the following three things happen: 1) The guest mashpia arrives hours late 2) He arrives tired and really unprepared 3) He simply does not show up.

If you are (or were) a bochur, you are probably nodding your head right now. This creates frustration – and above all – a wasted opportunity. In addition, many talmidim stop coming to the arranged farbrengen (and especially not on time) as they don’t want to just sit around and waste their own time.

When I was younger, I simply could not understand how the “guest mashpia” could do that to a group of pure boys (or girls) that have come to be inspired. As I got older, and my own family responsibilities grew, I came to understand the two key causes of the issue. We will begin with the first – and most important cause: It is not that the mashpia does not care, it is simply an issue of being purely volunteer.

Allow me to “pull away the curtain” from the family life of an idealistic – and inspiring mashpia. He keeps getting calls, and messages, from people pushing him to speak and farbreng. If he agrees, it usually is coming at the expense of his ability to deal with his kids the next day (as he was up all night at the farbrengen) or even the next evening (as he has another place to go to speak/farbeng). This can cause tremendous resentment – especially from the wife who has to now carry the full burden on the household and the children during this very busy month. She acknowledges that he has a responsibility to his bochurim (as that is his shlichus) but why should she have to “suffer” because of other groups of bochurim.

So what happens next: The husband – seeing that his wife is not happy with him leaving for another night (especially while the kids are still up, etc.) comes late to his “chessed project”  or doesn’t come at all (shalom bayis comes first). He definitely doesn’t take additional time off to think about and prepare what he would like to give over. This vicious cycle continues and continues.

What is the solution? It is very simple: Paying the mashpia for his time that he Farbrengs. While the true value of a successful Farbrengen is priceless, even a basic payment (of at least $180) would really change the story. The mashpia feels more obligated to come on time and “perform properly” and the wife feels respected and that her family also received something. If she can now – after a few farbrengens – buy the new shaitel that she had wanted for Yom Tov, or the clothes and shoes for her children, she will be less resentful – and even encouraging – of her husband going out and sharing his time and wisdom with other people.

I will share a personal story: Many years ago, I was invited to farbreng during Tishrei for the Yom Holedes of one of my Talmidim. I told the parents of the talmid that I would come, but I could not promise to stay a long time. At the end of the Farbrengen, the hosts – Rabbi Dovid and Mrs. Miriam Schmukler – handed me an envelope in which there was a nice amount of money, as a sign of appreciation. I was shocked and it was totally unexpected. When I told them that they really did not need to (as the bochur was my talmid!) they said: Would we not pay an entertainer who came to a birthday party? How much more so, should we give money to a real mashpia who inspired our son and his friends? This mindset was so heart-warming and impressive that it stands out until today.

Another story: When I was just married, I was recruited into teaching for “Beis Midrash L’nashim’ in 770 which is run by Ms. Ariella Benchayoun (a separate discussion should be had if young married men should be teaching women and older single girls). She had a roster of real famous rabbanim and mashpiim and I asked her innocently what the secret of all success was. Her answer was short and simple: “I pay all my teachers – in a timely manner – for all the classes that they teach”.

Truth is, the same issue exists during the regular year. People, especially former talmidim who are now grown up, keep calling their former teachers and mashpiim, and are demanding of the limited time that they are home and available. The wife understands the responsibility towards the current talmidim, but how many hours does she need to “give up” for the former talmidim? If she knew that the former Talmidim, which many are making a proper living, would pay her husband for his time and advice (as they would a therapist and doctor), she would be more willing (or at least less resentful)  to “share” her husband.

The second cause is the mistaken notion that a “good farbrengen” finishes between 3 and 5 am. If that is the case, there is no incentive for the mashpia to come earlier in the night, as he is “stuck” until 3 am. Why come at 10:30 and have to talk for 5 hours, if you can show up at 12:30 and talk for 2.5 hours and sleep in the middle as well (remember: it is all volunteer!)? If it is clear to the mashpia, that you are requesting and are happy with (and paying for) two hours of his time – and the talmidim know that it will start on time and finish at a certain time – the farbrengen would look different.

My point: Many mashpiim will almost never mention payment when they are asked to farbreng. They may feel guilty – as everything is a “shlichus” – or they simply be idealistic.  The goal of writing this is to change the culture: It should be normal that payment is offered (and it should not be the obligation of the talmidei hashluchim to fundraise that payment, it is the obligation of the yeshiva that needs their students to be inspired) out of appreciation of the time and expertise of the mashpia. The talmidim will be the ones that will truly benefit.

I would love to hear your thoughts, critique and feedback on the above.

May we all merit to see the Rebbe teaching us Torah in the Beis Hamikdash – NOW!