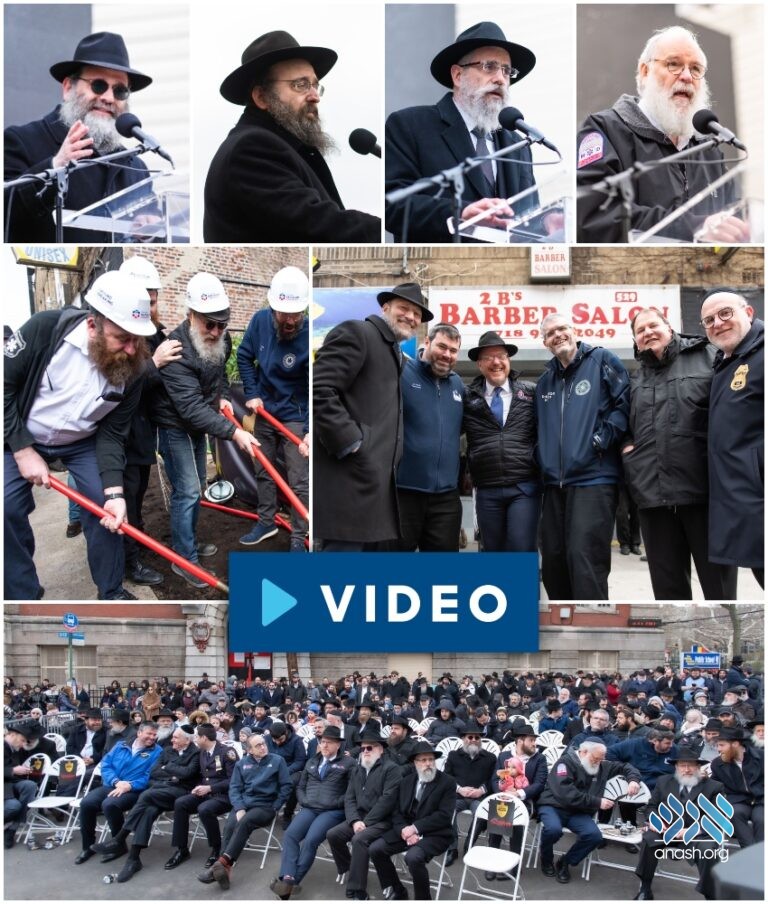 Although usually operating behind the scenes, this past Sunday, Hatzalah of Crown Heights was on full display as the community celebrated a historic milestone: the groundbreaking of a brand new, state-of-the-art facility right in the heart of the neighborhood.

Largely operating behind the scenes, this past Sunday, Hatzalah of Crown Heights was on full display as the community celebrated a historic milestone: the groundbreaking of a brand new, state-of-the-art facility right in the heart of the neighborhood.

The event kicked off with footage from the groundbreaking that took place some thirty-plus years ago, when the Rebbe personally participated in placing the cornerstone for the expansion of 770. A unique, physical link connected that pivotal moment to this one, as one of the shovels from the 770 groundbreaking was present at this Hatzalah groundbreaking.

Master of Ceremonies Rabbi Simon Jacobson welcomed and thanked everyone for coming, in particular the prestigious representation from the New York City Police Department and other city officials. Also in attendance was Rabbi Yechiel Kalish, CEO of Chevra Hatzalah, who recited a chapter of Tehillim with everyone.

Mara D’Asra of Crown Heights, Rabbi Yosef Braun addressed the crowd, sharing words of Torah and expressing his hope that very soon, Moshiach will come, when, as the Rebbe said, the omnipresent Hatzalah ambulance in front of 770 will fly on clouds to Eretz Yisrael.

Rabbi Yossi Simpson, who spoke on behalf of the Hatzalah coordinators, thanked the community for their support, as well as the entire team of over seventy Hatzalah members and their wives and families for their devotion and self sacrifice.

Rabbi Berel Junik, a staunch supporter of Hatzalah, spoke on behalf of the Sperlin family who have been longtime Hatzalah supporters and a spearheading force for this new facility. Reb Berel returned to a recurring theme that came up throughout the day, namely that Hatzalah of Crown Heights was arguably the first coordinated response to COVID-19 when it first hit the world in the early days of 2020. While many Healthcare providers were hesitant to even approach sick patients, the selfless volunteers of Crown Heights Hatzalah responded without the slightest hesitation to help save the lives of so many. This in many ways became the model for how to respond to COVID-19 by other divisions of Hatzalah throughout the world.

Thankful Hatzalah patient, Rabbi Levi Garelik, spoke as well, emotionally telling the crowd that he was not there to talk about Hatzalah, but rather because of Hatzalah. As demonstrated to him later, statistically speaking, the chances of him surviving his medical ordeal were about three percent–a bracket in which he thankfully belongs thanks to the lightning response time of Crown Heights Hatzalah who came to his aid.

Beloved community physician, Dr. Eli Rosen, himself a Hatzalah volunteer spoke as well, and was followed by Rabbi Shloimy Greenwald, a passionate supporter of Hatzalah. Reb Shloimy shared with heartfelt energy how he personally got involved with Hatzalah, regaling the crowd with moving stories from the dark days of the pandemic and how he, together with others, launched the United for Protection Sefer Torah project that brought so much healing.

After the speeches and videos, the music struck up a lively beat, and shovels finally hit ground. As the pioneer of Hatzalah in Crown Heights, Reb Yingy Bistritzky was honored with the first dig, and thereafter was joined by some of the major donors, as well as the leadership of Central Hatzalah, numerous Hatzalah coordinators from other areas, and all the Crown Heights Hatzalah members present.

With the ground freshly dug and the foundation stone in place, Hatzalah is well on its way to providing even greater professionalism and efficiency. When, G-d willing, the new facility will stand tall, the entire Crown Heights community will be able to sleep even tighter, confident with the knowledge that those who care for their safety round the clock are even better equipped to carry out their life-saving role.

To participate in the ongoing campaign visit chhatzalah.org/building