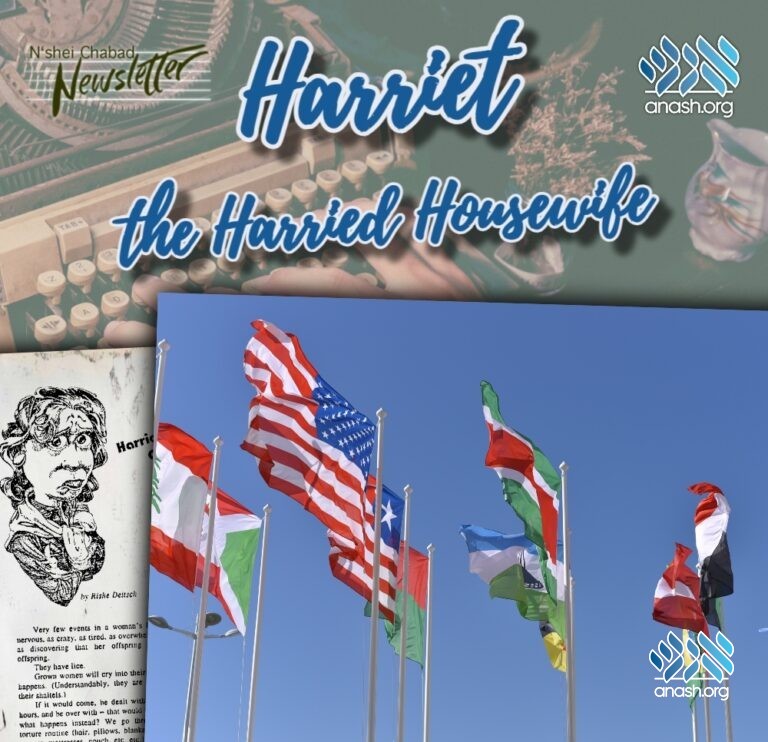 In installment 4 of N’shei Chabad Newsletter’s nostalgic Harriet the Harried Housewife we learn about the two kinds of Americans: Those who eat baked beans with hot dogs and put ketchup on French fries, and then there are the fake-passport ones.

There are two kinds of Americans, those who eat baked beans with hot dogs and put ketchup on French fries, and then there are the fake-passport ones… oh, they were born here alright, but they’re European through and through. To many of these “Americans,” English was a second language, after Yiddish. Many of them actually reach adulthood unable to ride a bike or borrow a book from the library, never mind read it in less than a week.

The Europeans among us like hot borscht, schav, petchaah, kavatchkee, and cholipses, with pontchikess for dessert. They do not like Chinese food. Anything “too American” turns them off…like vertical blinds. They prefer window treatment with that old-fashioned European flavor, like red velvet draperies over white lace curtains over shades (but only shades with tassels, or it’s too American).

Another thing about Europeans. Their hearts do not let them waste one single morsel of food. That’s why their refrigerators are full of little cups with a quarter of an ounce of egg salad, or little odd-shaped packages wrapped in tinfoil, which turn out to be the end of the pickle, with the stem attached. If they catch an American throwing that stuff out, they shriek, “How can you throw that away?!” Boy, the way they carry on, you’d think they just caught you stuffing whole apples down the disposal (something no red-blooded American would hesitate to do, if one had a worm in it).

Come on you Americans out there – I’m one of you, so we can be honest – didn’t you always try to keep your back to your mother when you were making the salad so she wouldn’t see how much lettuce you were throwing out? A little brown on the lettuce is no reason for a European not to use it!

Another difference. Europeans expect perfection. In what, you ask? In everything. They expect perfection in their spouses, their children, their food, their jobs, their laundry, their car washes, and their home improvements, to name just a few. This is why the Europeans among us walk around with those frowns on their faces: they are permanently disappointed. Americans, on the other hand, have such low standards that the Europeans are disgusted with us. They accuse us of saying, “Oh, come on,” and, “Whatever,” about practically everything.