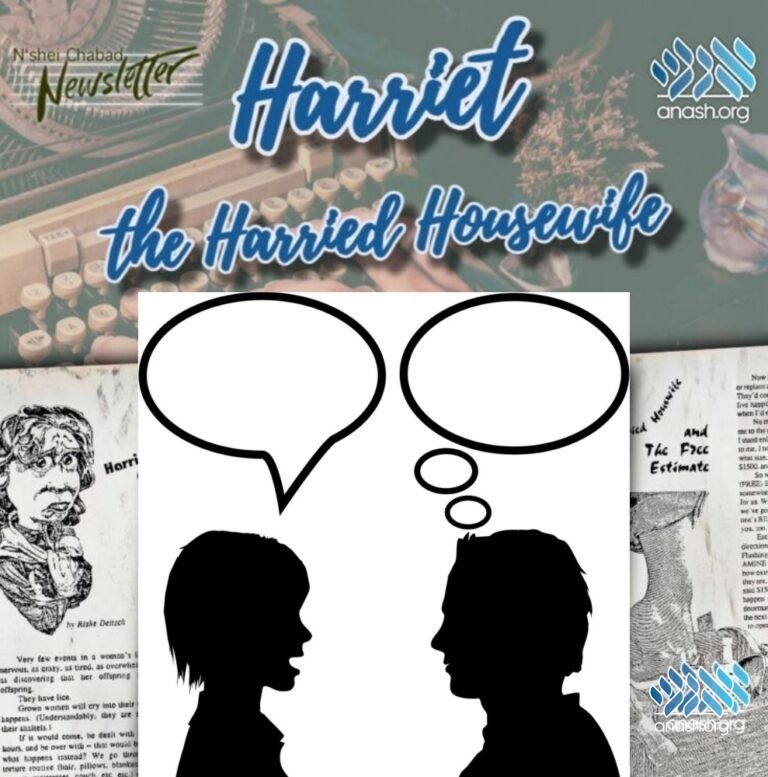 “My question is, if a woman yawns but her husband cannot read yawns, did she still make a statement?“ Installment 7 of N’shei Chabad Newsletter’s nostalgic Harriet the Housewife columns.

I’ve been given to understand that there are lots of young girls and kallas and newlyweds out there who read this column and say smugly, “Never me.” They basically say this when I talk about how very different marriage and home life is, say, ten or 20 years after the wedding, compared to, say, ten days or a month after. These youngsters have been led to believe that so long as the twinkle is in the eye, so to speak, all will always be rosy, and life is just one long date. And I’m here to tell you that twinkle, shminkle, you’re married to a different species!

Who wrote the first biology book, and decided that human men and human women were of the same species? They cannot be. They are as utterly different as giraffes to frogs, as pillows to silverware, as hot Wheatena to pistachio ice cream.

The cause for all the confusion is that this difference becomes strikingly evident only after a few years of marriage. Why this is so is another column. Even listing all the differences between men and women, biology aside, would fill ten columns. (Also, Rivki Geisinsky wouldn’t print it. You know her.) So here’s just one basic difference to chew on.

Women are intuitive. They pick up unspoken signals. They don’t need their information handed to them typed, double-spaced. For example any woman worth her milk (even a harried one) knows that a man who yawns before supper is hungry, not tired – probably just doing jaw warm-ups – whereas a man who yawns after supper simply does not wish to help clear. On the other hand, a woman who yawns for five seconds is trying to tell her husband that the baby woke up once at night, but went right back to sleep; a woman who yawns for a ten seconds is saying that the baby woke up twice and the second time was soaked through, all the way up to an elaborate 20-second yawn with sound effects which means that the third time the baby woke up he woke up the older ones, what a night it was, and somewhere in the story someone threw up.

All this yawning leaves us with a philosophical question, similar to if a tree falls in the forest and nobody is there to hear it, did it still make a noise? My question is, if a woman yawns but her husband cannot read yawns, did she still make a statement?

Well, you’re thinking, if this is so, then tell us the language and we will learn it. Ah, if it were only that simple. Unfortunately, there are as many languages as there are men. Each wife must spend years patiently cultivating her own little dictionary until finally, perhaps five or ten years down the line, she can just say something to him and it will enter his consciousness. Forget yawns, sighs, coughs, and eyebrow-lifts. Forget most of the words you’ve known up until now. You’re treading on unfamiliar territory now, and it’s each woman for herself.

Hint: Look to his livelihood. For example, if your husband’s job has to do with trucking merchandise out to customers, and you’re on the phone with him at 9:15 when you thought the kids were on the bus and now they’re ringing the doorbell, try this: “I just got a return on some goods I shipped out – and now I’ll have to pay freight.”

Or if your husband is a tax accountant, and you think you’re pregnant, put it this way for quickest comprehension: “Dear, I’m anticipating a new deduction for the fiscal year ’91.” He’ll be downstairs repairing the porter crib before you can say “maternity clothes.”

Happily, since you all know what your husbands do for a living (despite the fact that he has no inkling what you do all day) learning to communicate with him should come much easier now. Good luck.