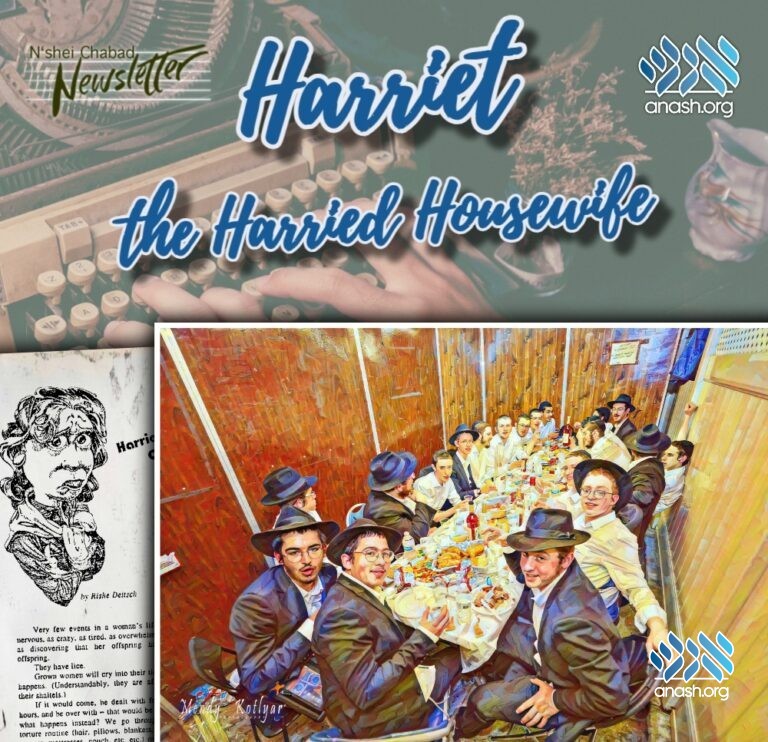 Anash.org and N’shei Chabad Newsletter present the first installment of the nostalgic “Harriet the Harried Housewife” columns. This week we read about Tishrei in Crown Heights in the 80s and we meet Sonya, Harriet’s annoyingly perfect alter ego.

This was the very first Harriet column, published in the N’shei Chabad Newsletter at the end of Tishrei 1980 (hence the reference to phone booths), when Rishe was 21. In this column we meet Sonya, Harriet’s annoyingly perfect alter ego. -Ed.

It occurred to me, talking long distance with my sister in Kansas, that although I live in Crown Heights, I saw about as much of “Tishrei” as she did. For which occasions did I go to 770? she wanted to know. The last time I was in 770 , I realized, was for my brother’s ufruf in July.

What is beginning to dawn on me is that Tishrei in Crown Heights just doesn’t seem to be the same animal for me as it is for everybody else. All around me, I hear about what the Rebbe said and did, getting crushed by the crowds, the incredible sights and sounds and smells of 770 – the only squeezing I participated in was that of 18 adults and seven children into a succah only slightly larger than a phone booth. The only crushing I suffered from was – ah! – watching my 24-egg quadruple-recipe apple-cinnamon kugel fall off the tray on the way to the succah. It was crushing, yes. As for experiencing the guests, I didn’t need 770 for that, I did that at home, and all I can say is G-d bless every last one of them (come on, weren’t you just a little nicer to the last one?).

My friend Sonya says there’s nothing to it. She says with a little organization and some Vitamin C, she is perfectly capable (I hate those two words) of feeding and housing a dozen guests, making it to at least one farbrengen a day in 770, and looking great by scheduling shaitel appointments on Chol HaMoed. When Sonya came over The Morning After to lend me a bottle of milk (I’d forgotten to order enough for everyone’s coffee) and found me still in a housecoat, she smiled forgivingly and picked a nonexistent spot of lint off her hand-knitted (by Sonya) wool suit. “I suppose now you’ll get yourself organized,” she kept smiling, “now that Yom Tov is over, the guests are leaving, the kids are back in school…”

I bared my teeth in a friendly way and thanked her for the milk. Our Shabbos bachur, Yaakov, the ex-psychology major, says that there will always be those who undermine our self-esteem by setting a good example, and we underachievers must never let them see that their super coping power unnerves us.

“Sonya,” I said, smiling tolerantly, “it’s the new look; haven’t you heard?” I swung open wide the double doors to my living room, hitherto double-locked in anticipation of Sonya’s visit. “Folding beds in the living room, cases of empty seltzer bottles lining the hallways – if your house doesn’t look like this, I wouldn’t know what to think—” but I never finished—poor Sonya was out the door.

I smiled again. Tishrei is over!