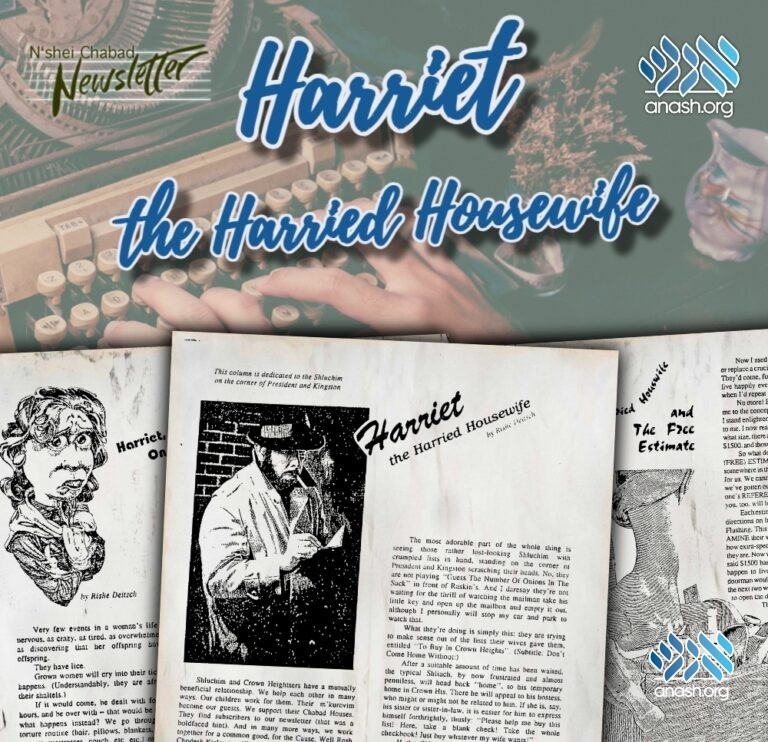 A thought on plungers, a follow-up on haircuts, and some behind-the-scenes look at the N’shei Chabad Newsletter. All in installment 6 of the nostalgic Harriet the Housewife columns.

When you need a plunger, what do you do? Borrow one from the neighbor, right? Well, the other day on Kingston I bumped into my friend Faygie Duchman carrying an oddly shaped package.

“Faygie,” I asked, never one to beat around the bush, “what’s in that oddly shaped package?”

She extracted from within a plunger, still freshly marked with the price. I was amazed at the price, and you might also be. A plunger costs only three dollars and fifty cents! Yes, now we can all afford to own a plunger of our very own, and stop running to the neighbors to borrow.

Some feedback on last issue’s rantings on haircuts. One woman asked how I could have left out the terrifying, panicky feeling that is experienced by the mother who trims her child’s bangs, only it comes out slightly shorter on the right, so she trims it ever so slightly on the left, but it is now a drop too short on the left, so she trims the right. The experience begins to take on a nightmarish quality as she keeps on evening it out, right, left, right, left, like a slow march to the inevitable end: your daughter is a Walking Mistake, will not go to school for two weeks, and you, her own mother, are responsible. Your daughter reminds you hourly, then daily, then weekly, for the rest of your life, that all the time and money in the world cannot erase the trauma you’ve caused her. Your grandchildren will know this story about you. You’ve ruined her life, and your own.

One woman said I shouldn’t complain about the price for my girls’ haircuts – at least I can tell they’ve gotten one afterwards. Her girls go, spend the money, and she can’t find where it was cut. An eighth of an inch behind the ears, perhaps?

Then there was this one last person, a man, who said that children’s hair is a sore topic with him and he wishes I hadn’t brought it up. He bought the haircutting machine to give his boys haircuts, but the boys sit there at haircut time and just keep shrugging, deliberately sabotaging the haircuts. And if I thought his girls don’t give him any grief, he adds, every Friday he has to station himself at the fuse box, broomstick in hand, because all seven of his daughters just have to blow-dry their hair at the same time. Last week, his wife gave birth to their eighth girl. He is rewiring the house.

What’s it like, working behind the scenes on the N’shei Chabad Newsletter? Well, for the articles, there’s Rivki Geisinsky, Naomi Saul and me. Since none of us ever has time to meet, we usually conduct our business a la Alexander Graham Bell. Now it took me a decade or so, but I finally can see the humor in it. First of all, there are the interruptions. For example, in the middle of the conversation, one of us feels compelled to mark down what has been decided, right? Of course! But wait – there’s not a writing implement, neither pen, pencil nor orange crayon, to be found in any one of our three houses.

If your kids are all still under five, I’ll be cryptic about this: You’ll see! That’s all I’ll say! I never thought it would happen to me, either, but it did! (It seems my son, a guteh neshamah, supplies the boys in his class with pens if they forget, and my daughter, the one with the business head, sells sharpened pencils at recess.)

Speaking of pencils, let me save you a few bucks. Don’t think that by buying the electric sharpener, you can avoid the hunchback posture and dust-covered clothing of a woman who bends over the garbage sharpening pencils all night. If you buy the electric, your little one will gleefully stick carrots and green beans in it, ruining the thing. The veggies come out real sharp, though.

But back to business. So there I am, holding on for dear life while Rivki spends 45 minutes searching for a pen under all the beds. (She tried to get me to change this to say that I was the one searching, but no, it was Rivki.) Finally she finds one, comes back to the phone, and we get back to work . Two minutes later, her son, who is in the middle of being trained, gives her The Signal. With a mighty whoop she drops the phone and runs! Doesn’t even bother to holler progress reports. We common laborers just don’t get any respect.

Then there are our arguments. She considers me a radical. I consider her fanatically moderate. Here’s a typical conversation between us:

Me: Rivki, we just can’t put that article in!

Rivki: Rishinkeh, just because you don’t agree with an article doesn’t mean it shouldn’t go in!

Me: But just because it’s typed double-spaced doesn’t mean it should!

Rivki: But there are no spelling mistakes either.

Me: You know that articles I don’t agree with go in all the time! Remember the one about –

Rivki: Stop! What are you writing the Harriet on this time?

Me (recognizing that she is deftly changing the topic but letting her get away with it): I don’t know, let’s see, what’s been going on in your house lately?

Rivki: Hold on, I’ll take a look, I haven’t been downstairs in days… wait a second, I have a beep –

Now this is where we really lose each other. Call Waiting has changed our telephone meetings forever, not to mention life as we know it. I can’t believe how many people I can talk to in one morning with Call Waiting taking me straight from one caller to the next with no breathers in between… plus at the end of the morning I have three people to call back, because I hung up on them in order to get back to the one I left on hold.

Now I don’t want to leave you with the impression that Rivki is just a cold, heartless slavedriver. There’s a whole other side to her, too. As soon as I find it I’ll write all about it. Only kidding – she’s a very diplomatic person and she is trying to be a good influence on me. As a matter of fact, one of her side interests for the last decade has been reworking my entire personality so as to make it less abrasive. Under her patient tutelage, I am learning how to deal with difficult situations with tact, grace, and aplomb. I now know what to say when a person whose article needed to be completely rewritten calls up and asks :

“Do you think I should get into writing more?”

Was a time when I would respond with brutal frankness: “I want you to write for me like I want Al Sharpton to babysit for me.” Now, however, I first clear my throat thoroughly, a stalling tactic which gives me time to ask myself: What would a truly tactful person say? Maybe something like: “It’s always a good idea for everyone to improve in language skills; we all have to communicate. And I wish you mazel and hatzlachah with that, and I’m glad we got to talk.” This implies the goal of not talking again too soon while also encouraging her, along with “everyone,” to “improve in language skills” (nice and vague) but not necessarily to use those skills for writing (I think).