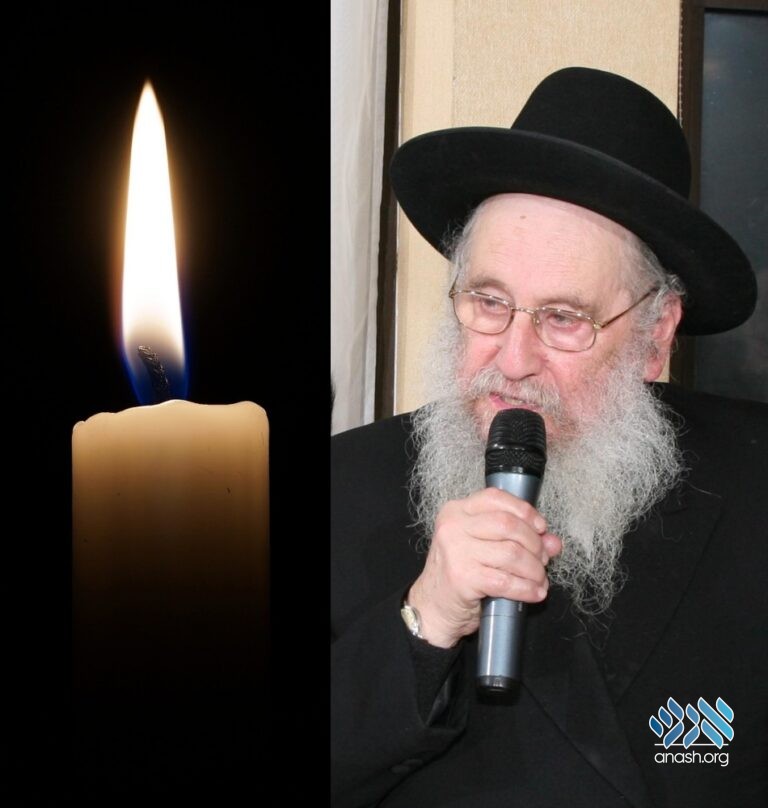 Harav Dovid Moshe Lieberman, an elderly Chabad rov who served as the Chief Rabbi of Antwerp, Belgium, and founder of the Merkaz Rabbonei Europe rabbinical organization, passed away on Wednesday evening, 25 Shvat.

Dovid Moshe was born in Cologne, Germany on Shvi’i Shel Pesach, 5685, to Rabbi Aizik and Mrs. Sara Hinda (nee Lipshitz) Lieberman, Polish immigrant parents from Mielec. When he was a year old, his family moved to Antwerp, where he began studying in the Yesodei Hatorah school.

At a young age, he gained a reputation as a “wonder kid”, and he began attending the Eitz Hachaim Yeshiva of Heide when he was just ten years old.

When World War II broke out, his father was in England on business, and his mother took the children and escaped to France. While his siblings managed to obtain seats on a ship and travel to USA, Mrs. Lieberman and her son Dovid Moshe remained stuck in France, where they were sent to a concentration camp. A short while later, the French Vichy government sent Mrs. Lieberman with other Yidden to an extermination camp, were killed. Dovid Moshe, however was kept in the concentration camp for another number of months, and he managed to escape, traveling to his uncle who lived in France.

After his uncle was deported by the French and sent to the Nazis, Dovid Moshe was taken to the orphanage run by Rabbi Shneur Zalman Schneerson, a fourth-generation descendant of the Tzemach Tzedek, who saved thousands of Jewish children during the Holocaust by hiding them. It was there that Dovid Moshe had his first encounter with Chassidus Chabad.

Over the coming years, the Nazis raided the orphanage a number of times, and it was only miraculously that Dovid Moshe avoided being sent to a concentration camp.

In Nissan of 5706, Dovid Moshe traveled to America, where he first met the Frierdiker Rebbe, and merited to have a yechidus with him. After Pesach of that year, he began studying at the Lakewood Yeshiva. Another student at the time was Shlomo Carlebach, and the two became close friends, a connection which remained until the latter’s passing. He later transferred to Yeshivas Tomchei Tmimim in 770, and after studying Yoreh Deah, he received smicha from Harav Moshe Feinstein and Harav Yisroel Zev Gustman.

After receiving smicha, he was sent by the Frierdiker Rebbe in 5709 to Chicago to serve as the rov in the Bnei Reuven shul. Two years later, he married Chaya Chitrik, daughter of Reb Yehuda Chitrik, a renowned Chabad chossid who had studied in Tomchei Tmimim in Lubavitch.

Both the Frierdiker Rebbe, and later the Rebbe showed incredible kiruvim to Rabbi Lieberman, and the Rebbe once wrote “Regarding the extraordinary young man…harav hagaon Dovid Moshe Lieberman; it is known to me that my father-in-law the [Frierdiker Rebbe] hk”m treasured him…”

In 5738, Rabbi Hillel Medalia, rov of the Shomrei Hadas Kehilla in Antwerp passed away, and the community appointed Rabbi Lieberman as rov, a role he went on to serve for over four decades.

During his tenure as Chief Rabbi, he gained a reputation both for his amazing mastery of Torah knowledge and diligence in study, as well as for his care and concern for each member of his community, and indeed every Yid in Antwerp.

In 5760, Rabbi Lieberman co-founded, together with Rabbis Gershon Mendel Garelik, Azriel Chaikin and Berel Lazar, the Merkaz Rabbonei Europe rabbinical organization, a body that unites approximately 700 shluchim and rabbonim from across Europe.

In his later years, he suffered from macular degeneration and lost his eyesight, but maintained his learning schedule by having chavrusos who would read the seforim that they were learning from, and by a technological device which read the words of the seforim for him. He even made a siyum hashas from what he learned after losing his eyesight.

In recent weeks, Rabbi Lieberman was hospitalized due to health complications, and on Tuesday this week, he came back home. On Wednesday, he davened mincha with his hat, long jacket, and gartel. After mincha and nightfall, he asked for a cup of water, made shehakol, closed his eyes and passed away, exactly 9 years to the day after his wife, Mrs. Chaya Lieberman, had passed away.

He is also survived by his siblings Yosef Lieberman, Hershel Lieberman and Rachelle Kramer.