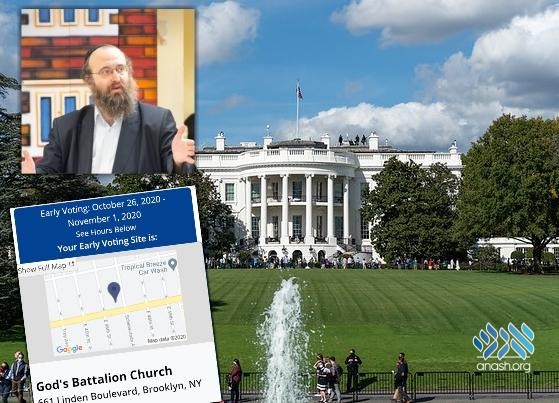 In recent days, some Crown Heights residents were disappointed to discover that their local early voting location is located inside a church, creating an undue burden on their right to vote.

Millions of Americans are lining up at early voting sites across the country to cast an early ballot in the upcoming presidential election, scheduled to take place on November 3.

Polling sites across New York City and elsewhere saw long lines in the first two days of early voting, as many voters tried to get ahead of the last-minute rush. Due to uncertainty about mail-in ballots, many more ballots are expected to be cast in person.

In recent days, some Crown Heights residents wishing to vote early were disappointed to discover, that for the second time this year, their local early voting location has been placed inside a church.

During the Democratic Party primary in June of this year, the voting station for the East Flatbush area was moved from a local public school to a church. After an outcry from the local Jewish community, election officials promised they would resolve the issue in time for the election.

Except that they didn’t. Those who were unwilling to enter the church were told they must travel to Borough Hall or trust a poll worker to place the ballot in the box on their behalf.

In a recent publication, Harav Yosef Y. Braun of the Crown Heights Beis Din, addressed the matter which is currently on the mind of many residents.

In the daily practical Halacha released by the Beis Din, the questioner asks Is it permitted to vote if your voting location is in a church?

One may enter a church to vote, provided it is not in the sanctuary, but rather they specifically set up a room for this purpose, e.g. the basement or a different room, since everyone knows that you are there to vote and not for anything else. This is only permitted if one has no other place to vote. If the location can be changed, it must be changed.