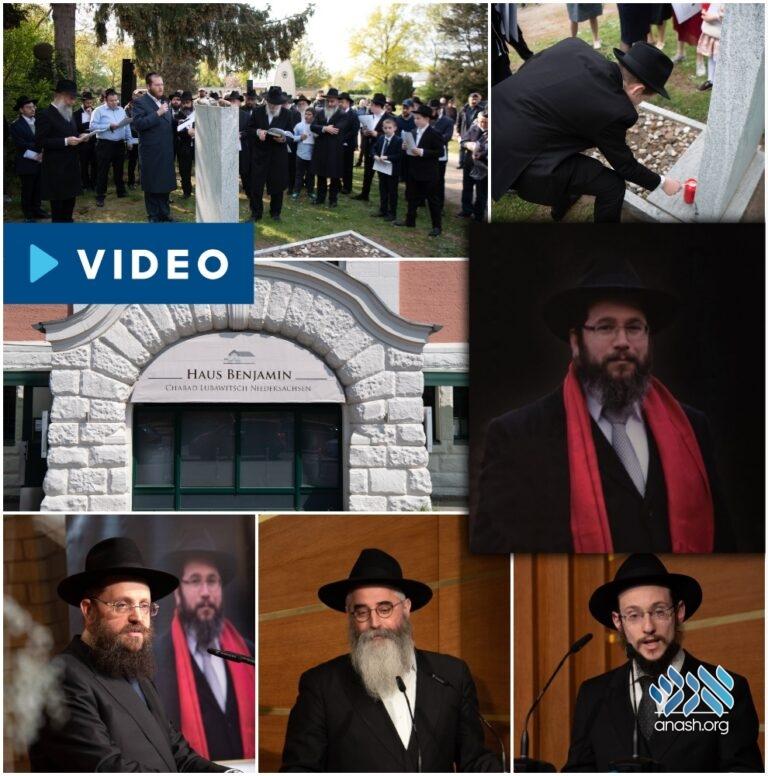 The second yahrzeit of Hanover Shliach Rabbi Benny Wolff was marked in his makom hashlichus with a series of events, including a visit to his gravesite and the dedication of a new, unique local project.

Monday, Rosh Chodesh Iyar, marked the anniversary of the passing of the unforgettable Shaliach Rabbi Binyomin Wolff of Hanover, Germany, who tragically passed away two years ago at a very young age.

Various events were held in Hannover to mark this day and were attended by huge crowds of the members of the local community, shluchim from other German cities and from all over Europe and family members who flew in from all over the world.

‏The day was opened with a visit to the cemetery to pray at the grave site of Rabbi Wolff. The recitation of the Tehillim was lead by Rabbi Elyakim Wolff of Morristown, New Jersey, Marc Simon – Rabbi Wolff’s close friend, family friend Dr. Pinchas Kamenetski, Rabbi Yosef Yitzchak Greenberg, shliach to Alaska, USA, and the rabbi of the Chabad community in Hanover, Rabbi Wolf’s son-in-law, Rabbi Levi Yitzchak Gottlieb.

At the end of the recitation of the Tehillim, Rabbi Wolff’s children said Kaddish, and then dozens of participants lit memorial candles.

‏The main community event took place afternoon in the new magnificent Chabad Center “Beis Binyamin” in the center of Hanover, dedicated and named after Rabbi Wolff on his first yahrzeit.

‏The event was opened by the shliach to Berlin, Rabbi Yehuda Teichtel, who spoke about the kiddush Hashem that took place in Hanover over the last two years. Despite the great tragedy and sadness, he said, Rebbetzin Sterna Wolf and the family have found some comfort by bringing new growth and joy to Hanover, continuing and expanding the activities of her late husband.

The Head Shliach of Germany Rabbi Yisroel Diskin delivered a message from the Rebbe’s words in honor of the event.

‏The shlucha of Hannover Rebbetzin Sterna Wolf then addressed the event, thanking the community members for partnering ‏with her in turning this great tragedy into great growth.

Hanover Mayor Mr. Belit Onay spoke next, expressing his amazement from what took place in the last two years and pledging his help for the Jewish community and the Chabad in Hanover

‏Shliach to Odessa and southern Ukraine, Rabbi Avraham Wolf, a cousin of Rabbi Binyomin Wolff, spoke about the importance of simcha especially during this troubling times, when we are faced with uncertainty and the ongoing war in Ukraine.

Alaska Shliach, Rabbi Yosef Yitzchak Greenberg spoke on behalf of the Wolff and Greenberg families and thanked the members of the community in Hannover for their outstanding partnership and support in building the new Chabad Center.

A film of Beis Benjamin’s activities during the past year was shown, and at the end of the official event, the entire audience went out to the courtyard of the building for the dedication ceremony for “Bereshit Park,” a playground that will serve the Jewish center, as well as the general public. The park, available for use for all residents of Hanover, will serve as a symbol of of the Jewish people’ mission to be a light on to all nations.

Towards evening the shluchim and the many family members who had traveled from all over the world sat down for a farbrengen that lasted until late at night.