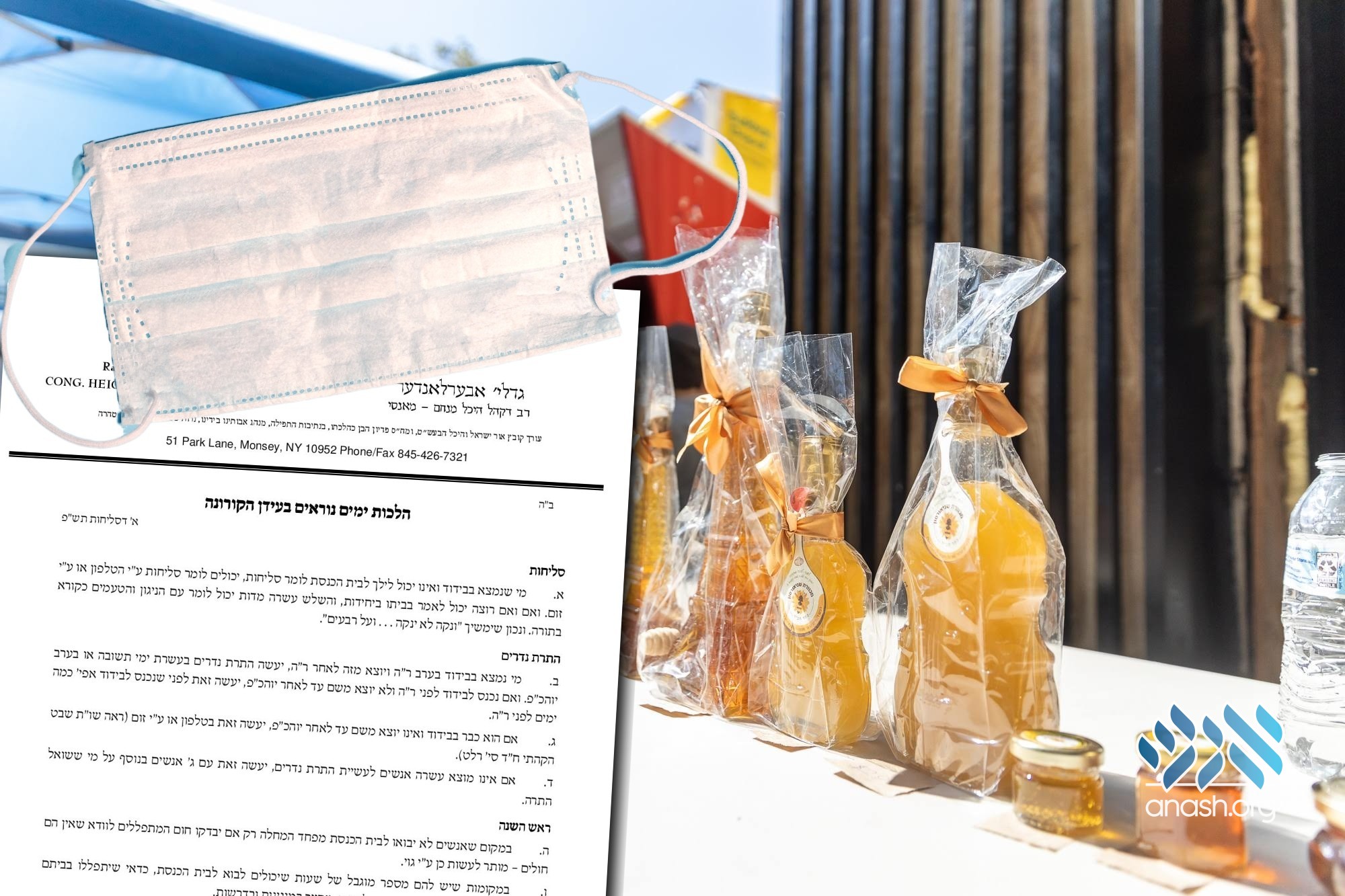 Harav Gedalya Oberlander, rov of Heichal Menachem in Monsey, NY, and member of Vaad Rabbonei Lubavitch, published a short halachic digest of halachos that pertain to Rosh Hashana during the coronavirus pandemic.

Harav Gedalya Oberlander, rov of Heichal Menachem in Monsey, NY, and member of Vaad Rabbonei Lubavitch, published a short halachic digest of halachos that pertain to Rosh Hashana during the coronavirus pandemic.

1.       One who is in quarantine and cannot go to shul to say selichos, can say selichos via telephone or zoom. If he’d like he can say it on his own at home and recite the yud gimmel middos with the trop used for leining and it is preferable that he complete the pasuk “venakei lo yenake…ve’al riba’im“.

3.       If one is already in quarantine and won’t be out of quarantine until after Yom Kipur he should do hatoras nedorim over the phone or zoom.

4.       One who cannot find ten people for hatoras nedorim should do it with three people in addition to himself.

6.       In those areas where there is a limit to the amount of hours that shul can be attended, it is preferable to daven shacharis at home and come to shul for tekias shofar and musaf and they should shorten the songs and speeches.

7.        If there is a limit to the amount of people that can participate in the minyan, two or three or more minyanim should be made. If chazzanim cannot be found for the additional minyanim and chazoras hashatz won’t be said then someone that already davened in one minyan can say chazoras hashatz in a second minyan.

8. There is no obligation to stand every time the aron kodesh is opened.

9. One who is weak and wants to eat before shofar on the second day of Rosh Hashana can eat mezonos less than a kabeitza. If he can suffice with drinking then he should only drink. On the first day of Rosh Hashana, which is Shabbos, he can eat more.

11. The shofar should not be covered with a mask since this might change the sound. It is also prohibited to add anything onto the shofar. For fear of the saliva etc. coming out of the shofar, the baal tokeah can cover his head and the shofar with his tallis, in which way the shofat itself is not covered. The baal tokea can also stand at the side of the shul or even stand outside the room and blow from there and everyone is yotzei lechatchila.

12. One who is sick or weak can sit or lie in bed during tekios, because me’ikar hadin only the baal tokea himself must stand.

13. A sick person who is in isolation may hear the shofar through the door or window.

14. One is davening alone at home doesn’t blow shofar during musaf, even if he has someone to blow for him. However, he should complete the 100 sounds after davening.

15.  One who is blowing at home for himself should blow the shevarim-terua without taking a breath in between them. If it hard for him then he can take a breath.

16. In an instance where 30 sounds are not able to be blown, for example for a sick person or on mivtzoyim, then it should be done like Rabbi Yekusiel Farkash suggests, to blow tashrat three times and with a breath in between in the shevarim and terua, and make a condition that whichever sounds of the shevarim terua are “extra” should not be counted for the mitzva.
Therefore whichever sounds are the “extra” ones won’t be considered a hefsek, because if the shevarim is the correct sound then the terua won’t be a hefsek and if the terua is the correct sound then the shevarim won’t be a hefsek.

18. A child who reached the age of chinuch should not blow shofar for women. If it is a sha’as hadchak and if he won’t blow then they won’t hear shofar at all, then he should blow for them and the woman should tell him that he should have in mind that this is a fulfillment of a mitzvas asei in the torah.

19. One who is davening at home alone should not daven musaf until three hours (halachik hours) into the day, which means after sof zman krias shema. This applies to the second day of Rosh Hashana as well.

20. A sick person who needs to sleep on Rosh Hashana can do so after midday.

21. A sick person or one who is in quarantine who cannot go to tashlich, if he has at home an aquarium of fish he can recite tashlich next to it, and if he doesn’t have one then he can say it next to the sink with the faucet open. If that is also not possible then he can do it in Aseress Yemei Teshuva.