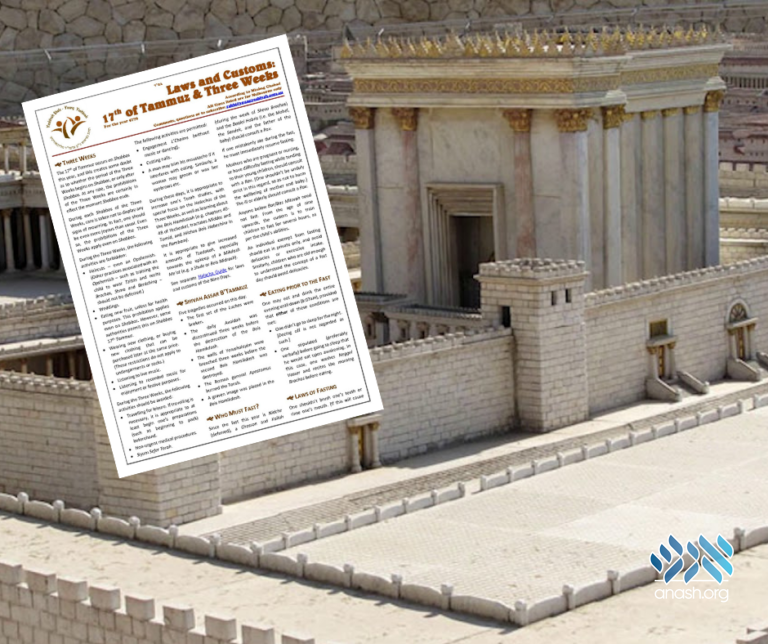 The following is a Halacha guidebook for 17th of Tammuz and the Three Weeks, compiled by Rabbi Shmuel Lesches, Rov of Young Yeshivah Shul in Melbourne, Australia.

During the Three Weeks, the following activities are forbidden:

• Haircuts – even an Opshernish. (Other practices associated with an Opshernish – such as training the child to wear Tzitzis and recite Brochos, Shma and Bentching – should not be deferred.)

• Eating new fruit, unless for health purposes. This prohibition applies even on Shabbos. However, some authorities permit this on Shabbos 17th Tammuz.

• Wearing new clothing, or buying new clothing that can be purchased later at the same price. (These restrictions do not apply to undergarments or socks.)

• Listening to recorded music for enjoyment or festive purposes.

During the Three Weeks, the following activities should be avoided:

• Travelling for leisure. If travelling is necessary, it is appropriate to at least begin one’s preparations (such as beginning to pack) beforehand.

• A man may trim his moustache if it interferes with eating. Similarly, a woman may groom or wax her eyebrows etc.

During these days, it is appropriate to increase one’s Torah studies, with special focus on the Halachos of the Three Weeks, as well as learning about the Beis Hamikdash (e.g. chapters 40- 48 of Yechezkel, tractates Middos and Tomid, and Hilchos Beis Habechira in the Rambam).

It is appropriate to give increased amounts of Tzedakah, especially towards the upkeep of a Mikdash Me’at (e.g. a Shule or Beis Midrash).

See separate Halacha Guide for laws and customs of the Nine Days.

Five tragedies occurred on this day:

• The first set of the Luchos were broken.

• The daily Avoidah was discontinued three weeks before the destruction of the Beis Hamikdash.

• The walls of Yerushalayim were breached three weeks before the second Beis Hamikdash was destroyed.

• A graven image was placed in the Beis Hamikdash.

Since the fast this year is Nidche (deferred), a Chosson and Kallah (during the week of Sheva Brochos) and the Baalei Habris (i.e. the Mohel, the Sandek, and the father of the baby) should consult a Rav.

If one mistakenly ate during the fast, he must immediately resume fasting.

Mothers who are pregnant or nursing, or have difficulty fasting while tending to their young children, should consult with a Rov. [One shouldn’t be unduly strict in this regard, so as not to harm the wellbeing of mother and baby.] The ill or elderly should consult a Rav.

Anyone below Bar/Bas Mitzvah need not fast. From the age of nine upwards, the custom is to train children to fast for several hours, as per the child’s abilities.

An individual exempt from fasting should eat in private only, and avoid delicacies or excessive intake. Similarly, children who are old enough to understand the concept of a fast day should avoid delicacies.

 EATING PRIOR TO THE FAST

One may eat and drink the entire evening until dawn (6:07am), provided that either of these conditions are met:

• One didn’t go to sleep for the night. [Dozing off is not regarded as such.]

• One stipulated (preferably verbally) before going to sleep that he would eat upon awakening. In this case, one washes Neggel Vasser and recites the morning Brochos before eating.

One shouldn’t brush one’s teeth or rinse one’s mouth. [If this will cause great aggravation, there is room to be lenient, provided that one leans forward to prevent any liquid from flowing down one’s throat; that one uses substances unfit for consumption (e.g. Listerine); and that one rinses with less than 86 ml.]

One may take non-chewable pills for medical purposes, without water. A Rav should be consulted regarding other medications.

One may shower, bathe and apply ointments and creams.

When a Bris occurs on a fast, the Seudah takes place on the night following the fast.

One may touch food and engage in its preparation.

One may not taste food to determine whether it requires salt/spices. However, when preparing food for a Seudas Mitzvah scheduled for the night immediately following the fast, one may taste the food, provided that all these conditions are met:

• One expels it without swallowing.

• One tastes only an absolute minimum.

• One does not taste more than 86 ml in total throughout the day.

 CONDUCT ON A FAST DAY

One should learn Torah connected to the topic of the fast.

The Rebbe instructed that one learn the passages of Nevi’im which are associated with the fast of the 17th of Tammuz. These can be found in Melachim II 25:3-8, Yirmiyahu 39:2-7 and Zecharya 8:18-19.

One should give increased Tzedakah, especially before davening. It is proper to give the value of the forgone meals – especially if one is exempt from fasting.

The purpose of fasting is to make a Cheshbon Hanefesh (reckoning of one’s deeds) and arouse one to do Teshuvah. Idling away one’s time, or partaking in joyous or entertaining activities, is not in the spirit of the fast.

One should be especially careful not to become angered.

During Shacharis, only the Chazzan recites Aneinu. Therefore, one who is not fasting (or who anticipates that he won’t be able to finish the fast) shouldn’t serve as Chazzan.

[In the unlikely event that the Chazzan is not fasting, or less than three congregants are fasting: Instead of reciting Aneinu between Goel Yisroel and R’faeinu, the Chazzan includes Aneinu in the Brocho of Sh’ma Koleinu, and concludes the Brocho regularly; i.e. Shomea Tefillah.]

A Chazan who forgot to recite Aneinu:

• if he already concluded the Brocho of R’foeinu, he recites Aneinu in the Brocho of Sh’ma Koleinu, and concludes the Brocho with a double conclusion; i.e. Ha’one B’eis Tzara V’shomea Tefillah;

One who is not fasting must still recite Selichos and Avinu Malkeinu.

One who davens without a Minyan omits the Yud-Gimel Midos-Harachamim.

If Tachnun is not recited (e.g. when a Chosson or one of the Baalei Habris are present), Selichos is still recited, whereas Avinu Malkeinu is not recited.

The passage of Vayechal is read, provided that at least three congregants are fasting.

A non-fasting individual must still hear Krias Hatorah of Vayechal, but should not be called up for an Aliya. [If he is the only Kohen or Levi, he should absent himself.] If he is called up, and refusing the Aliya will cause him embarrassment and minimize the honour of the Torah, he may accept the Aliya.

A non-fasting individual shouldn’t serve as the Ba’al Koreh, unless there is no one else who can.

Mincha is longer than usual (due to Krias Hatorah and Haftorah); care should be taken to conclude before sunset.

Ideally, Krias Hatorah should not begin prior to Mincha Gedolah. Shmoneh Esrei may not begin before then.

After Haftorah, the Chazzan begins Kaddish when the Torah is returned to the Aron Kodesh, similar to Mincha on Shabbos.

If an individual forgot to recite Aneinu in the Brocho of Sh’ma Koleinu, he may recite it in the passage Elokai N’tzor, before the second Yih’yu L’ratzon. If one didn’t remember until he concluded Shmoneh Esrei, he does not repeat it. [A non-fasting individual does not recite Aneinu.]

The Chazzan recites Aneinu between Goel Yisroel and R’faeinu, and also recites Birchas Kohanim toward the end of Shmoneh Esrei.

The Rebbe reintroduced the custom of addressing the congregation after Mincha to arouse them with feelings of Teshuvah.