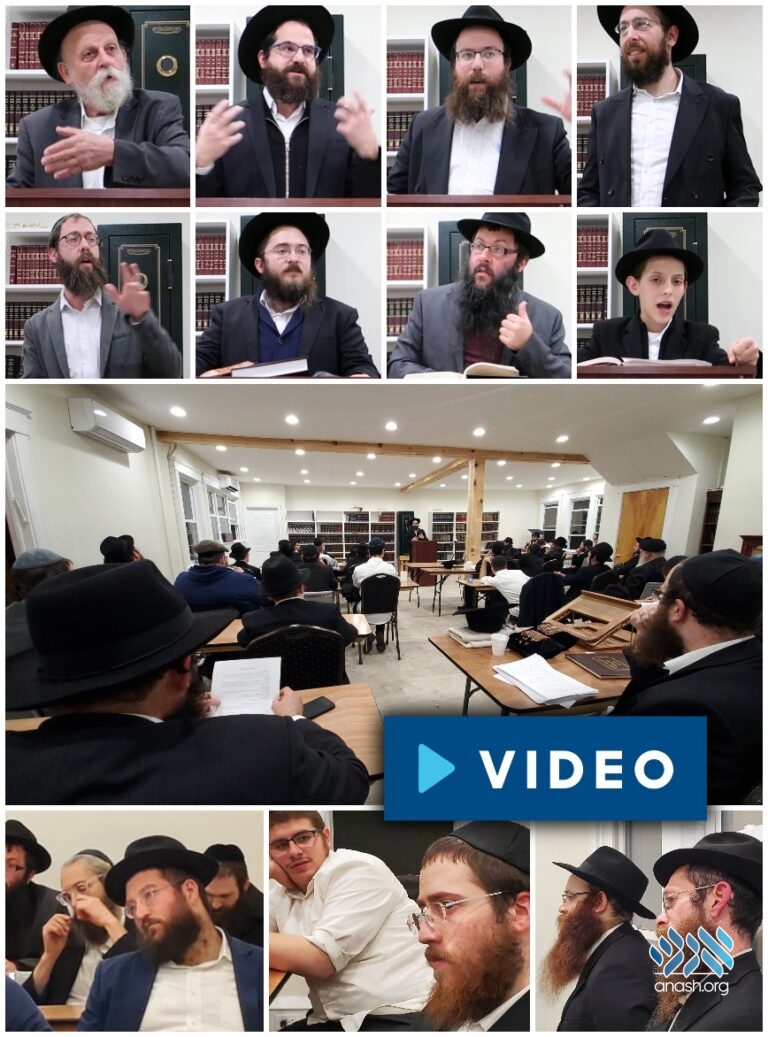 A packed crowd of Anash and bochurim of the Kingston PA community gathered in the Mesivta for a special Hakhel Kinus Torah led by staff, local maggidei shiur, and community members.

A packed crowd of Anash and bochurim came out on Monday evening for a Kinus Torah at the Mesivta of Kingston PA. The kinus, a highlight in Kingston, was opened by Rosh Yeshiva Rabbi Shimon Hellinger who invited the speakers to share divrei Torah.

The first to speak was Rabbi Tzvi Perlman, the Rebbe’s shliach of 50 years to Kingston-Wilkes Barre, who inspired those gathered with inyonei d’yoma.

Next to speak was Rabbi Yankel Berkowitz, a local maggid shiur, who addressed the shailah of davening from a phone. Drawing upon various halachic sources on holding items during davening, he noted that the Terumas Hadeshen discusses whether one can hold a siddur while davening shemoneh esrei! In practice, he pointed out the distractions that a phone can bring, and that it should only be used when there are no other options.

Maggid Shiur in the Poconos Yeshiva, Rabbi Mendel Gorman, told a fascinating story of a baalas teshuva who found out that she wasn’t Jewish and was preparing to undergo geirus. In the meantime, someone told her that she must break Shabbos. Rabbi Gorman discussed the status of the avos before Matan Torah and why doing melacha on Motzaei Shabbos may remove the prohibition (in this week’s parsha) for non-Jews to observe Shabbos.

Rabbi Tzvi Wolvovsky, a respected member of Anash in Kingston, spoke about why Mitzvas Hakhel cannot be done nowadays without a Beis Hamikdash, according to those opinions that korbanos could theoretically be brought. A similar question can be asked about Hakhel in the various mishkanos, and the question of Korban Pesach and leaving Yerushalayim nowadays.

Chayenu editor, Rabbi Itzik Yarmush, traced the development of the Rebbe’s position on Hakhel, particularly as it pertains to bringing young children. He discussed the earliest age for Mitzvas Hakhel as understood from the Rebbe’s words.

Rabbi Yehudah Leib Aronson, mashpia in Mesivta, gave an overview of a Torah study that pertains equally to all (like Hakhel): Shnayim Mikra V’Echad Targum. He covered the correct format, optimal time, and how Chitas also plays a role in this mitzvah.

A talmid in Mesivta, Hatomim Yosef Aizenman, shared a thought from Masechta Beitzah being learned in the yeshiva. He presented the positions of various Rishonim and analyzed the Alter Rebbe’s wording to answer a question of the Ramban.

The crowd enjoyed the variety of speakers and left enlightened and uplifted.