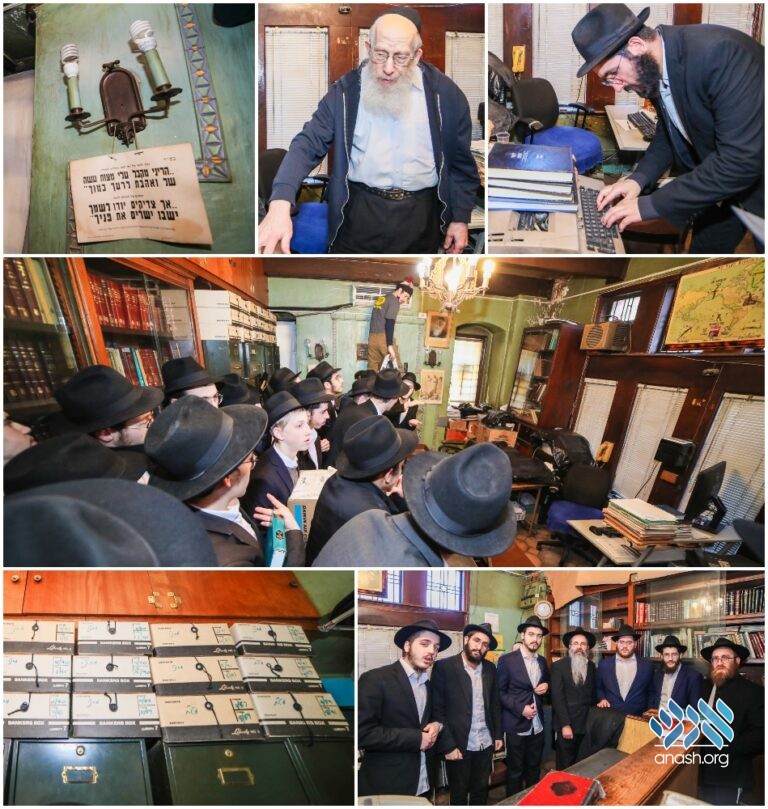 While on a rare tour of the ‘cheder mazkirus’ in 770, a group of guests noticed a sign that had been hanging on a while for 4 decades…but seemed to address the current state of affairs in the world.

A group of bochurim from the Chabad Yeshiva in Bnei Brak on a visit to New York were given a rare tour of the ‘cheder hamazkirus’ in 770, the room where the Rebbe’s secretariat worked out of.

The room is still in use, with limited operations being run from there, mainly by Rabbi Sholom Yisroel Hodakov, son of the Rebbe’s head mazkir Rabbi Chaim Mordechai Aizik Hodakov. In fact, many of the decades-old phones and apparatus in the office are still in use.

Rabbi Hodakov showed the bochurim around the room, pointing out some unique features and items. He showed them the filing boxes full of mail that had been received in the 1990s, divided into separate boxes for items relating to Merkos L’inyonei Chinuch and Machane Yisroel.

He also pointed out a sign hanging on the wall, calling for Yidden to say hareini mekabel before davening shacharis every day, and ach tazadikim at the end of each tefillah. The sign was prepared after the Rebbe asked to publicize about the two passages to every Yid, as a response to the deteriorating situation around the globe. Nearly 40 years later, with the entire world watching as Russia brutally invades Ukraine, throwing the future of global security into the question, the decades-old sign seemed to more relevant than ever.