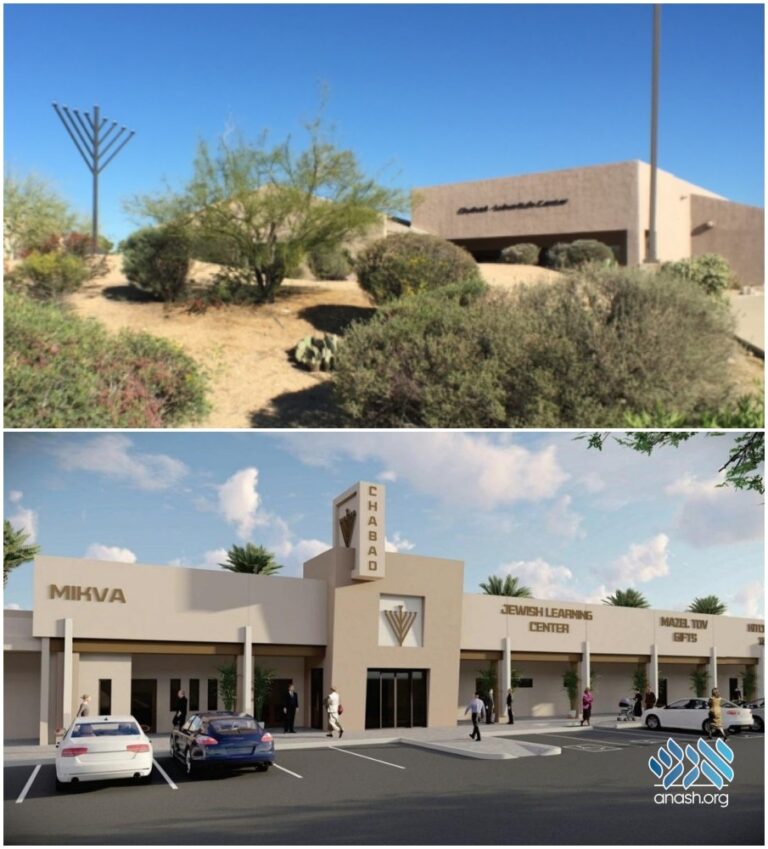 The growth of the Chabad community in Arizona has prompted the opening of a new Mesivta and a new high school for girls, both opening up for the 5782 school year.

“It’s very hard to get in anywhere, and it’s also not fun to have to send your ninth-grader away,” said Chabad of Scottsdale Rabbi Yossi Levertov. He spearheaded the development of a yeshiva high school for boys in August. Its first class is already full despite the fact the school doesn’t yet have a name. Beis Chana High School of Arizona for girls is opening in August, and its first class is also full.

“There’s a certain flavor that sends the Chabad rabbis places that others wouldn’t go. And that happens because of a particular education,” said Levertov. “We process a certain way because of the unique education we receive in our younger years. It is that special worldview that we hope to teach and impart to our young boys in this new yeshiva.”

But the number of Chabad schools depends on the area.

For example, in New York — which has 21% of the American Jewish population according to a 2021 Brandeis University study — there were at least 15 Chabad high schools as of 2019, according to the Merkos L’Inyonei Chinuch directory of Chabad educational institutions. Meanwhile, places like New Mexico, with less than 1% of the Jewish population, were not listed.

Depending on where people live, families may not have a choice but to send their kids away for a Jewish education.

“There is a shortage of Chabad high schools,” Levertov said. Outside of large metropolitan areas, there aren’t options, “and it’s very hard to get into any school so we need one locally.”

Phoenix now has a few options for families looking for an Orthodox Jewish high school. Shearim Torah High School for Girls opened in 2007, Yeshiva High School of Arizona was founded in 2010, and co-ed Nishmat Adin, or Shalhevet Scottsdale is opening this fall. The Oasis School, another inclusive and coeducational Jewish high school, is set to welcome its first class in 2022.

Rochel Welner, head of school of Cheder Lubavitch and Beis Chana, said each school offers families something different. Both the new Chabad yeshiva and Beis Chana offer boarding opportunities, drawing a mix of locals and students from across the country and even the world.

The yeshiva’s freshman class will be around 20 students, only seven of whom are locals. The boys will study at the Jewish Learning Center, adjacent to the Chabad of Scottsdale, and will live in a dormitory nearby. Students have 13-hour days with breaks. “If there’s other subjects they want to cover on their own, they’ll have to stay later,” Levertov said. “It’s an intense program where they literally study all day.”

Beis Chana’s freshman class will start with 17 students, only seven of whom are locals. For the first year, the ninth graders will utilize the Cheder Girls’ building, which is adjacent to the Cheder, and live nearby. The Judaic studies curriculum will be “rich and diverse with in-depth, challenging lessons and thought-provoking, meaningful classroom discussions,” Welner said. The general studies program will be “challenging and rigorous” and will include all the core subjects meeting state standards for an Arizona high school diploma.

Plans for Beis Chana were developed over a year ago, Welner said. Rishe Majesky, who was principal of Bnos Menachem girls’ school in Brooklyn, New York for 19 years, will be principal.

Many students from out of town have siblings who are familiar with Majesky, which Welner said is a draw for prospective families as well.

Levertov began forming the yeshiva two weeks before Passover. “I wear a Chabad hat and I have a full-time job running the Chabad activities in Scottsdale,” he said. “We are very busy, but when we saw that nothing was happening, sometimes you have to stand up and make things happen.”

Rabbi Zalman Levertov started Chabad of Arizona from scratch. He and his wife moved to Arizona from New York 44 years ago as schluchim. Now there are around 40 Chabads in the state.

“When I came to town (in 1992), the Jewish Community Center wasn’t in Phoenix. And then there were years that it was just floating around. And I believe that we at Chabad have had a very large part in uplifting and raising the bar within the Jewish community,” said Yossi, Zalman’s youngest brother.