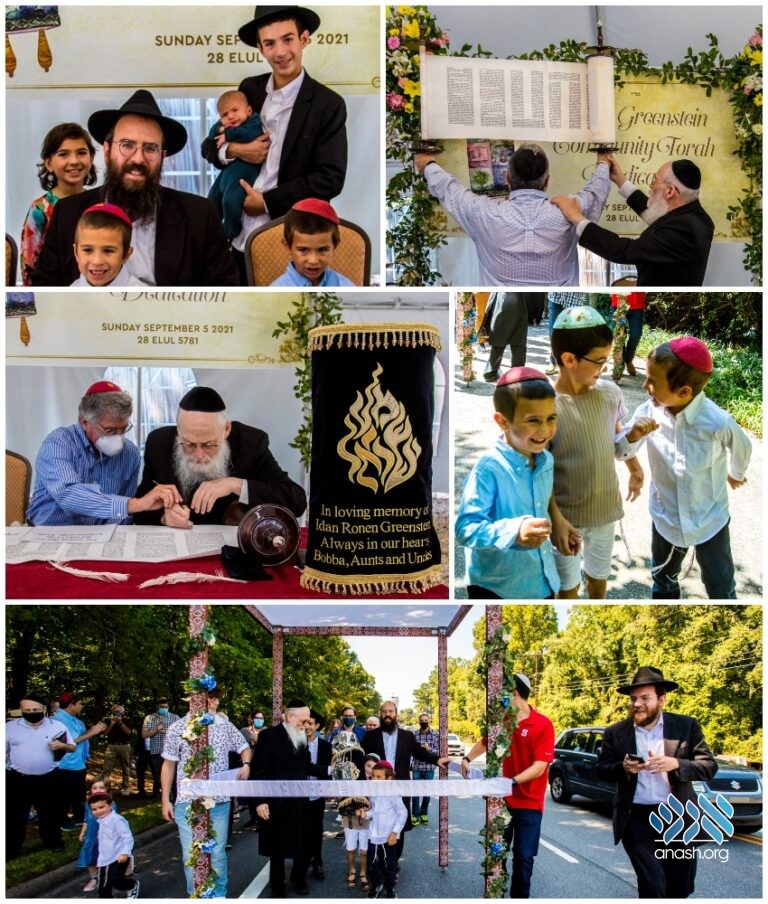 The new year began on an uplifting note for the Jewish Community of Greensboro, North Carolina, led by shluchim Rabbi Yosef and Hindy Plotkin, as they welcomed a new Sefer Torah just in time for Rosh Hashana.

The specially-trained and visiting rabbi from New York held onto the pen, made from a turkey feather that was sturdy and durable, cut to the point to give it the flat surface necessary for forming the unique Hebrew calligraphy.

Then Rabbi Moshe Klein dipped it into the ink in front of him and added the final strokes.

The writing of a Torah is slow and steady work, something that generations of families gathered to participate in on Sunday at the Chabad Jewish Center of Greensboro. Their feelings while taking part in writing the final letters ranged from giddy to tearful as they gathered around Klein.

The writing of a Torah, which professionally trained scribes called sofers might do once or twice in a lifetime, takes about a year of full-time work.

“This is something I’ve never seen done,” said Debbie Manella, 64, in town visiting her daughter.

The timing of the completion and dedication of this Torah comes in the days leading up to Rosh Hashanah or the Jewish New Year, which begins at sundown Monday and ends 10 days later with a day of fasting and Yom Kippur, also known as the Day of Atonement.

The group carried the completed Torah down a closed-off lane of Friendly Avenue while participants danced and sang in Hebrew. The Torah will be housed at the Chabad Jewish Center.

The Torah was commissioned in the memory of Idan Greenstein, a Binghamton University junior from Greensboro majoring in electrical engineering and member of the BU Pep Band. Greenstein came home from New York at the start of the pandemic to quarantine with his parents in Greensboro. He died in Chapel Hill as the result of a motorcycle accident.

His parents wrote the first letter with the help of a scribe more than a year ago. They sat with Klein on Sunday to write the last three, including the twelfth letter of the Hebrew alphabet, which is called “lamed” and makes the sound of “l” as in “library.”

“Out of something so tragic, something really special,” Valerie Greenstein later said.

Also at the event was Idan Greenstein’s niece, who is just a few days old.

The religious scroll, sometimes referred to as the Book of Moses, is written in Hebrew on parchment paper made from the skin of a young calf. Dating back more than 3,000 years, the Torah traces the origins of the Jewish people from Genesis to the death of Moses in Deuteronomy. It includes the teachings of God revealed to the people at Mount Sinai, including the Ten Commandments. It is divided in weekly portions and read annually in ancient Hebrew over the course of a year.

Procedures are passed from generation to generation for handling a Torah. Under Jewish tradition, only a sofer has the authority to work on Torahs. He has training in Hebrew calligraphy and the study of religious law.

When the decision was made to commission a Torah, Rabbi Yosef Plotkin of the Greensboro Chabad contacted a friend in Australia who suggested a rabbi in Israel that he knew. The scribe intentionally left the last few passages blank so that it could be filled in by the local community.

Participants asked Klein to act on their behalf — as if they were making the full strokes themselves.

“A new book for a new year,” Plotkin said. “It will always be a part of our community.”

Each Torah must be identical down to spelling and spacing, using paper from kosher animal skins and a certain kind of ink. The Torah is written only in consonants — no vowels.

“You want to hold this?” Klein said with a reassuring smile to 6-year-old Levi Plotkin, the local rabbi’s son.

Klein gently pressed the feather onto the paper, holding the boy’s hands.

Scribes do make mistakes, but they can be corrected. They are remedied by scraping or flaking off the letters and writing them over. Levi’s help, however, was perfect.

Area synagogues have some Torahs that date back as far as the 1800s, and there’s even one reclaimed from Nazi Germany.

Klein waited for the ink to dry on the community’s newest Torah — at one point fanning the last few marks and then pressing a white napkin against them. The ends of the scroll were placed on wooden rollers, called trees of life.

And the Torah was hoisted in the air and paraded down Friendly Avenue.