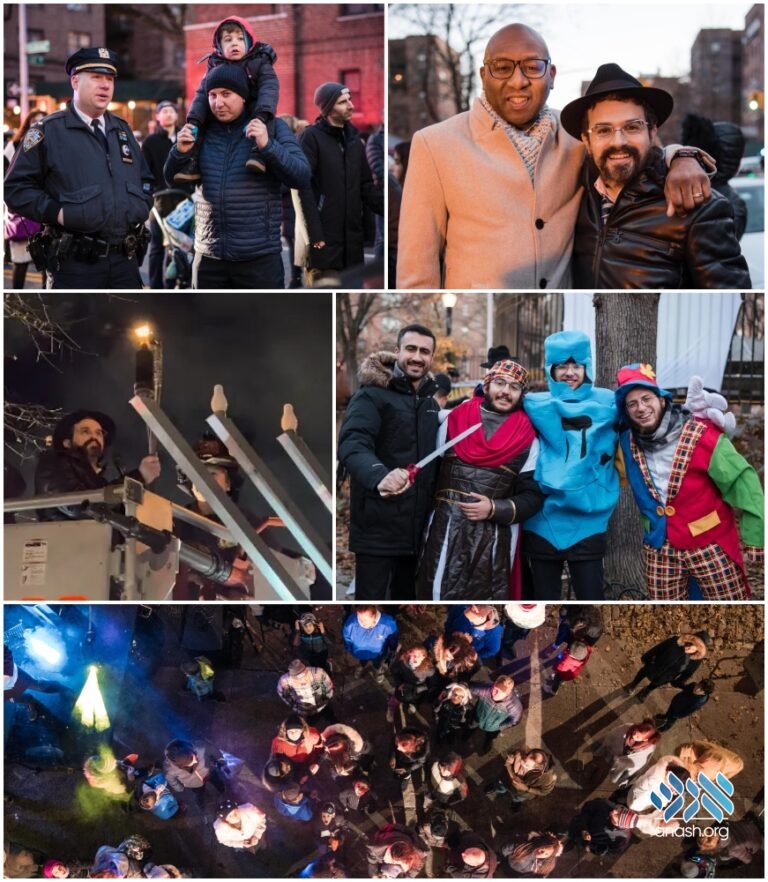 The annual lighting of the 18-foot menorah in Queens’ Yellowstone Municipal Park marked a double celebration this year: Chanukah and the 10-year anniversary of Chabad of Forest Hills North, led by Rabbi Mendy and Rebbetzin Chaya Hecht.

“Chanukah on The Park” and its symbolic 18-foot menorah continues to beam brighter each year.

Situated in front of Yellowstone Municipal Park, a ceremony filled with diverse activities continues to grow – both logistically and in spirit.

This Forest Hills tradition originated in 2015 and was founded by Rabbi Mendy Hecht and Rebbetzin Chaya Hecht of Chabad of Forest Hills North, which also serves the greater community.

Additionally, residents of Yellowstone Boulevard apartment buildings took advantage of an aerial view from their windows.

“What a beautiful sight,” Hecht said. “Being that we had a longer event this year with more entertainment, we had crowds of people at all times.”

Each night thereafter, a Chanukah menorah lighting was held on a smaller scale.

This past September marked another miracle; the 10-year anniversary of Chabad of Forest Hills North.

The ambiance felt traditional yet innovative. The diverse lineup of the eighth annual Chanukah festival featured many highlights, such as the FDNY Ladder 138 Menorah Lighting and Chanukah Gelt (chocolate coin) drop from a cherry picker that is over 30 feet in height, which is a Chabad of Forest Hills North novelty.

The menorah was kindled with a torch, beginning with the “Shamash,” the central candle used to light the other candles. Lighting one candle is symbolic of unity.

Chabad boys dressed up as dreidel mascots, clowns and Maccabees, choreographed their way through the multi-generational crowd.

Hecht delivered a bold speech from his heart. “The light of the menorah is not just for us or our families, but for the people around us like the windows of the Holy Temple going outwards to bring light outwards.”

He referenced and adapted a notable quote from John F. Kennedy’s inaugural address by saying, “Do not say what can my country do for me, but say what can I do for my country. Spread the light to others.”

A production featured traditional and original Chanukah tunes and Israeli songs, and the ambiance was heightened with a newly created stage.

Memorable Chanukah tunes include “Al Hanisim,” “Candlelight,” “Light Up The Nights,” “Ma’oz Tzur” and “I Have A Little Dreidel.”

The CKids of The Arts performance, consisting of Chabad of Forest Hills North’s very own Hebrew School children, made a debut. Their show-stopper was “I’ll be a neis. I will be a bright light. I will be a miracle of light.”

The Illusionist and Duo Fire Show was also an eye-opener, marked with oohs and ahhs from the crowd. Guests reminisced about earlier successful lineups, which featured DJs, a ventriloquist puppet show and a magic show. Among last year’s highlights was a BMX bike show that spanned the block.

Reflecting upon the festival’s success, Hecht said, “We had the honor to have Borough President Donovan Richards. His strong support for the Jewish community and for Israel and Jewish values was delivered. He said he doesn’t speak words, but takes action, and he will continue to fight against anti-Semitism. This was heard loud and clear, echoing from the podium. Other elected officials also expressed their support for the Jewish community.”

There is a significant message of Chanukah that everyone should understand and be compassionate about, regardless of their religion and culture. Hecht explained, “Spread goodness and kindness. Spread light. A little bit of light pushes away darkness. We all need this lesson and we all need a bit of light in this dark world, regardless of our religion.”

Chanukah serves as a model for all inaugurations, including education, which is the most significant.

“The Lubavitcher Rebbe often stressed the unique connection between Chanukah and education. It is a special time that inspires children to connect to their heritage, as can be seen by many customs, including the giving of Chanukah gelt,” he continued. Chanukah is also a time of continued spiritual growth.

Another miracle is how rabbis and rebbetzins, local residents, guest speakers, the FDNY, 112th Precinct and musicians among other creative personalities come together in the name of unity to spread much light.

Each year, the event is noted in detail, so the following year can be grander and more accurate. Much transpires behind the scenes to ensure the festival’s success, as explained by Hecht, who says it is not a “1-2-3 job.”

“We can surely say that after eight years, next year’s will be even better than before. Every detail is looked over and there is much work for several weeks dedicated to it,” he said.

“Even an order of over 600 donuts is not an easy undertaking. Then picture the entertainment crew details and setup, the schedule and ensuring the NYPD are briefed properly for the event to run smoothly. The FDNY also has their time slot. Just the 18-foot menorah is a job within itself, and then it truly looks beautiful ‘on the park.’”

As a religious leader, it is even a continuous learning process for Hecht, for events including Chanukah on the Park.

“I have learned that it is never enough, and I have more light and more Jewish fun to bring to the masses. The community is thirsty and I have a responsibility,” he said.

He thanks G-d for the miraculous achievement of eight years of Chanukah on the Park.

“Everyone is looking forward to this annual event, so we said on such a milestone, we must boost it up,” he said.

This is also a time of additional divinity, as in eight lights on the menorah pertaining to the “Hakhel Gathering.” “In the Holy Temple, all Jews would gather in the eighth year to hear the Torah read by the king, and to learn to fear G-d and keep his laws. The Rebbe OBM asked that we actualize it just like our ancestors have in the corresponding year, and create big gatherings.”

The festival is another achievement that signifies how Chabad of Forest Hills North is a beacon of light in the community, continuing to spread the message behind the Chanukah light year-round.

“We are here for the community in goodness and during the unfortunate times, but we hope we can be there for only good times,” Hecht said. “We will be a support in so many ways, whether spiritually or by physically showing up with a care package in a rehabilitation center, or to do a simple mitzvah (good deed) in other ways.”