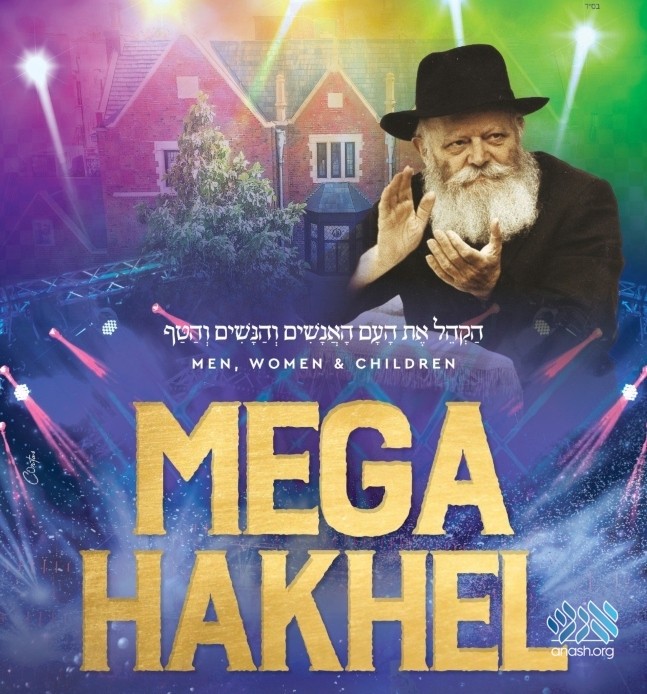 A Mega Hakhel Event will take place in Crown Heights on Chol Hamoed Sukkos and is expected to draw tens of thousands from across the Metropolitan Area.

Following the success of previous Mega Hakhel events in Crown Heights, once again, Tzivos Hashem, In conjunction with Merkos L’inyonei Chinuch and the schools and Shuls of Crown Heights, are inviting all to the Mega Hakhel of 5783. Men, Women and children are invited to join this enormous event, for the entire Crown Heights and greater Chabad community on Thursday, the 18th of Tishrei – October 13th, the second day of Chol Hamoed, to kick off this grand year of Hakhel.

Reminiscent of the Jewish people gathering at Har Sinai to hear the Torah, the Mitzvah of Hakhel was celebrated in the Beis Hamikdash, where the Jewish people would gather to hear their King read from the Torah at the end of each Shmita year. It would uplift them and set the tone for their journey back into the field, implanting in their hearts to study Torah and know Hashem. The Rebbe reintroduced this Mitzvah to be celebrated, even without the Beis Hamikdash, particularly on the Yom Tov of Sukkos, when the fatherings took place in the Beis Hamikdash. The Rebbe repeatedly encouraged the gathering of Yidden each Hakhel year, to gather in crowds, and inspire each other to increase in Torah observance and foster an environment of Yiras Shamayim.

“We all know how dear Hakhel is to the Rebbe,” says musician Chony Milecki, the event’s program and entertainment manager. “When you read and watch the Rebbe’s Sichas about Hakhel, you see that this wasn’t just any ordinary campaign, but a major koch of the Rebbe”.  Join us as we start off this special year of Hakhel with joyous music, men, women and children, uniting together in joy and spirit with Rebbe’s message and Pesukim. The festivities will conclude with Simchas Beis Hashoeiva dancing accompanied by a 20 piece band.