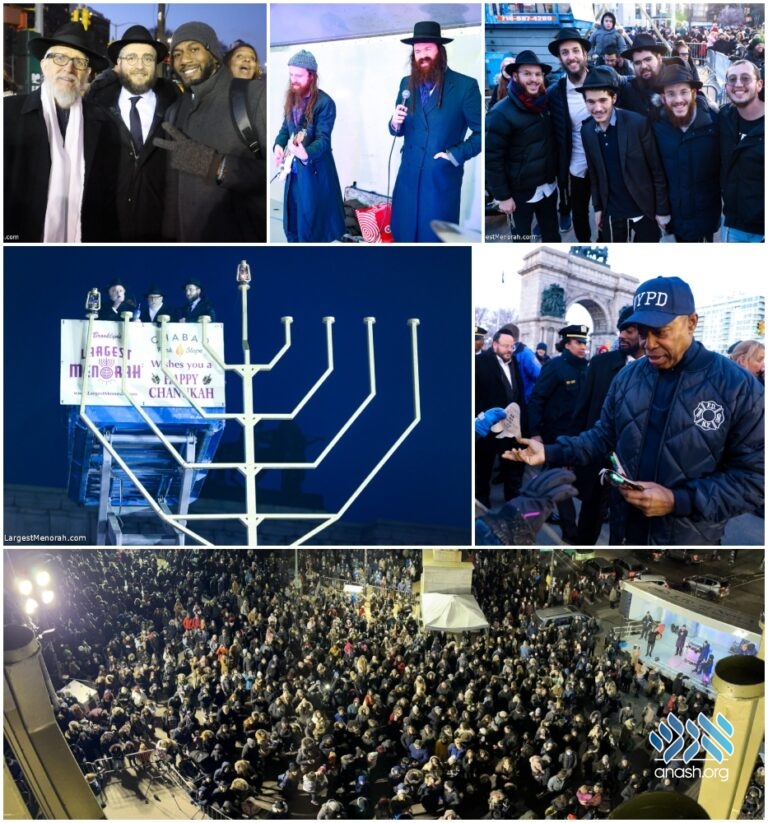 The first light of Chanukah was kindled on Brooklyn’s Largest Menorah at Grand Army Plaza with a crowd of hundreds joining top NYPD brass and elected officials to celebrate.

The first light of Chanukah was kindled on Brooklyn’s Largest Menorah at Grand Army Plaza with a crowd of hundreds joining top NYPD brass and elected officials to celebrate.

The community event featured the world-famous Zusha live-in-concert, in addition to hot latkes and special gifts for the children. Menorahs and Chanukah kits were offered to the crowd, and hundreds received one, allowing them to celebrate at home.

Attending the celebration were a number of elected officials, who addressed the crowd and handed out toys for the children. Among them were NYC Mayor Eric Adams, and New York City Public Advocate Jumaane Williams and NY Attorney General Letitia James. The menorah was kindled by R’ Shimmy Barber of Crown Heights.

Rabbi Shimon Hecht, Director of Chabad Park Slope, highlighted that this year is a year of Hakhel and in this spirit all men, women and children are encouraged to participate.

“Unfortunately, Brooklyn has been a source of anti-Jewish rhetoric, hate crimes and revisionist history. Chanukah is the miraculous victory of light. Now is the time to publicly display our commitment to our history and traditions. We will not be bullied. We will not be deterred. From Brooklyn, NY we will deliver to the world our message of light and truth stronger than ever before,” he said.

Due to the height of the huge menorah, the gold-colored steel structure was lit using a special 45-foot boom lift. Kerosene lanterns with specially designed glass chimneys shelter the Chanukah lights from the outdoor elements.