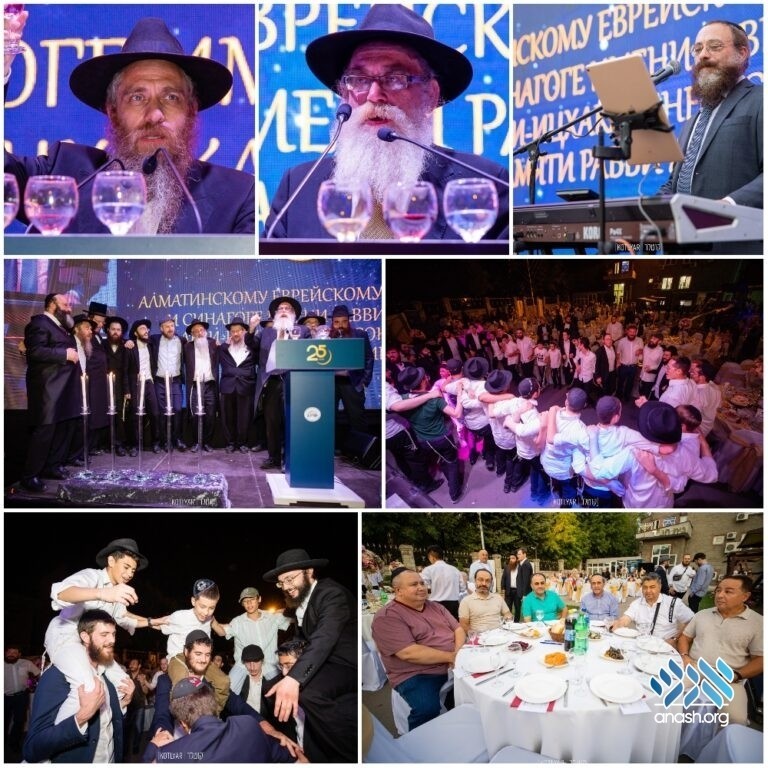 The annual Chof Av farbrengen in Almaty, Kazakhstan, just a short distance from the tziyun of Reb Levi Yitzchok, marked another milestone this year as well: 25 years since the founding of the Chabad center in Almaty.

A grand farbrengen in Almaty, Kazakhstan on Tuesday night marked a double milestone: the 78th hilula of Harav Levi Yitzchok Schneerson, father of the Rebbe, as well as 25 years since the founding of the Beis Menachem Center of Almaty.

The farbrengen, which was also the central Chof Av farbrengen for locals and guests, took place in the courtyard of the Chabad House of Almaty, just a short distance from the Jewish cemetery where Reb Levi Yitzchok is buried.

Over 1,000 people joined the farbrengen, with locals from the Almaty Jewish community joining with guests from the USA, Eretz Yisroel, Europe, Russia, and from across Kazakhstan.

The farbrengen focused on the life and impact of Reb Levi Yitzchok, as well as on the activities of Chabad of Almaty, headed by Rabbi Yeshaya Cohen and Rabbi Elchanan Cohen in the two and a half decades since the founding of the center. Joining them on stage was their brother, musician R’ Yossi Cohen of Crown Heights, who accompanied the evening with chassidishe niggunim. A highlight of the evening was when the three brothers broke out into a joint dance on the stage.

During the evening, one of the children from the local Chabad camp surprised the assembled with an announcement that in honor of Chof Av, he is accepting upon himself to begin putting on tefillin each day.

Addressing the farbrengen was philanthropist R’ Shmuel Stern, who strongly praised the work of the shluchim and called to support them. He also delighted the crowd with musical renditions of his own. Philanthropist R’ Dovid Rogatsky, who arranges the yearly charter from New York for Chof Av, also addressed the farbrengen live from New York, calling for achdus among chassidim.

The evening concluded with an emotional seder niggunim, with the highlight being the hakafos niggun of Reb Levi Yiאזchok, the ba’al hilula.

“Even if you were not able to physically travel to the holy tziyun on Chof Av, you could still have your name mentioned there for all brachos, and at the same time support the work of the shluchim throughout the year” said Rabbi Yeshaya Cohen, the Chief Rabbi and Head Shliach of Kazakhstan.

“It is well known how much importance the Rebbe gave to the mitzvah of kibud av, and that the Rebbe gave an incredible bracha that those who donate in memory of his father would be repaid up to 500 times as much,” he said. “This is your opportunity to join and take part in the ongoing Chabad activities in Kazakhstan and in the upkeep of Reb Levi Yitzchok’s tziyun.”