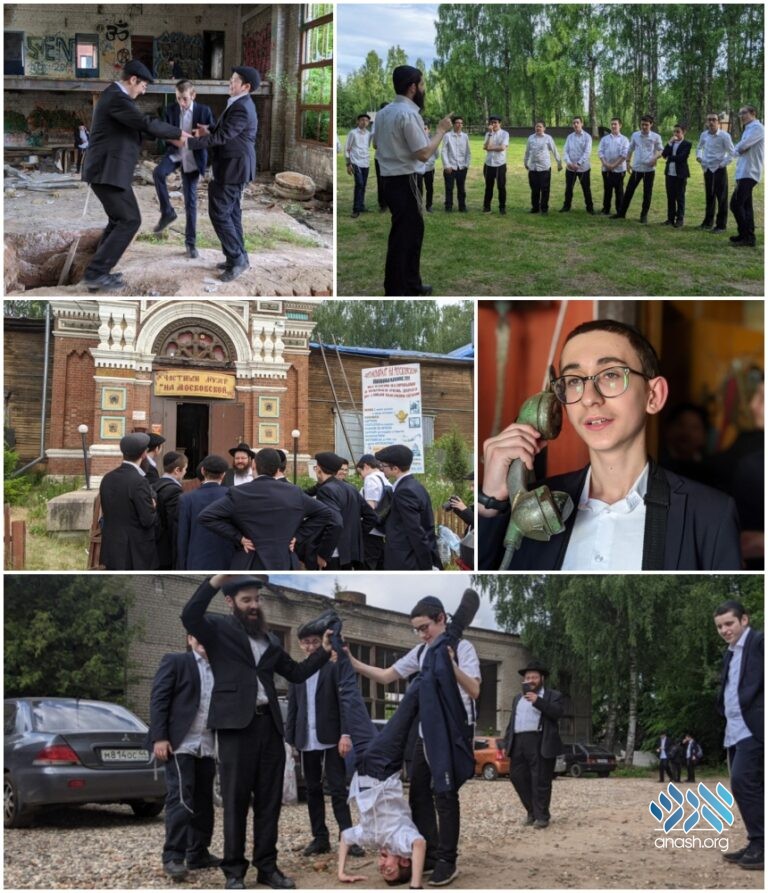 The graduating students of Cheder Menachem Moscow chose a unique graduation trip this year: A visit to the city of Kostroma, where the Frierdiker Rebbe was exiled to by the Soviet Regime, and where the geulah of Yud Beis Tammuz took place.

The students of Cheder Menachem of Moscow went on a very special graduation trip this year. In preparation for their switch from Cheder to Yeshiva Ktana, and even before that to Yeshivas Kayitz, -the boys were given a unique spiritually and physically recharging experience by the dedicated staff of Cheder Menachem, which was founded by the Chief Rabbi of Russia Berel Lazar.

After careful advance preparation, the students and teachers embarked on a Chassidic journey to the city of Kostrama, which they reached after a night’s train ride on the world’s longest train line. For two days the students visited the historical Chassidic sites in this pastoral city on the banks of the Volga River, which had previously served as a city of exile for the opponents of Czarist and communist regime.

On Sunday, Gimmel Tammuz, after 19 days of sitting in prison and being sentenced to death, the Frierdiker Rebbe was exiled to the city of Kostrama, where few Jews lived.

His daughter, the holy Rebetzin Chaya Mushka joined him in this exile, as well as his son in law Rabbi Shmaryahu Gourarie, and the esteemed chossid Rabbi Eliyahu Chaim Althaus. A few days earlier, the chossid Reb Michoel Dworkin arrived in Kostrama in order to prepare the city for the Rebbe’s arrival, and even established a Cheder there. Even after the Frierdiker Rebbe arrived in the city of exile, the committee that dealt with his rescue decided to continue with the attempts and efforts for his complete release, and to this end they enlisted the help of Ms. Fishkova, who appealed to the heads of the Soviet government to release the Frierdiker Rebbe.

When the Frierdiker Rebbe arrived in Kostrama, he was commanded to appear each Tuesday in the offices of the NKVD, and this week, ninety four years ago, on Yud Beis Tammus 5687, when he came for his weekly appearance, he was told that he need not appear anymore, since they have received orders to release him. Since that day was a holiday in Kostrama, the Rebbe had to wait until the following day in order to receive an official certificate of his release. When the Rebbe finally received the long awaited document, many people gathered in his home, where he said before them a Chassidic Maamar beginning with the words “Boruch hagomel lechayovim tovos”.

Today, Rabbi Nissan Rupo serves as the shliach and rabbi of the city. In coordination with the director of Moscow’s educational institutions, Rabbi Yosef Yitzchok Lipsker, the Cheder principal Rabbi Avraham Gewirtz, and the class mechanech Rabbi Avraham Zaks, Rabbi Rupo led the students to the home of the shochet, where the Frierdiker Rebbe lived at that time, to the offices of the NKVD, and other various fascinating landmarks, all of which instilled in the students an understanding of the great mesirus nefesh that the Rebbe had, as well as the great privilege they have serving as the Rebbe’s shluchim in Russia’s capital.

During the two day trip, the students davened and learned in the old shul standing in the city center, and the shliach Rabbi Rupo arranged for the boys to do mivtzoim with the local Jews, laying tefilin, putting up mezuzos, learning with them and more.

This Chassidic trip paved the way for the journey awaiting the students into their upcoming years of learning in Yeshiva Ktana, and then Yeshiva Gedola of Moscow, years that will build them up both spritiually and physically as true Chassidim serving Hashem.