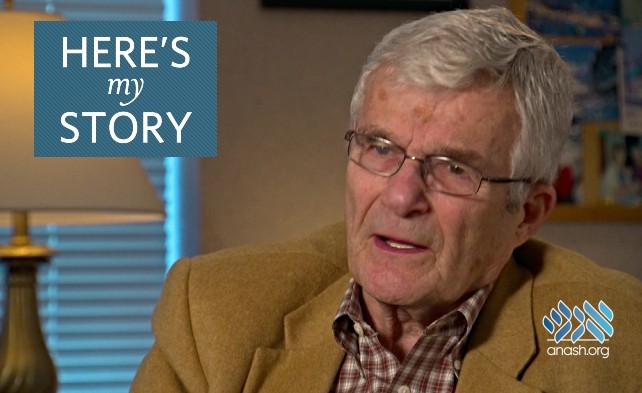 Former Senator Rudy Boschwitz tells of his early encounters with the Rebbe and which sicha the Rebbe asked to be read into the Congressional Record.

Mr. Rudy Boschwitz is a former Independent-Republican United States Senator who represented Minnesota from 1978 to 1991. He has also served as a United States Ambassador to the United Nations Commission on Human Rights. He was interviewed in May of 2012.

My relationship with Lubavitch started when Rabbi Moshe Feller, Chabad’s longtime representative in Minnesota, came to my store, not long after I opened it, to buy some lumber for his sukkah.

I had grown up around New York, before coming out to Minnesota to begin a business. Rabbi Feller is himself a Minnesotan, and he had returned there in 1962 as a Chabad emissary just a few years before I got there.

I noticed him as he was leaving the store; beards were not unusual back then, but he wore tzitzit, so I recognized that he was an Orthodox Jew – and likely, a rabbi. I introduced myself, and that became the beginning of a very long and very satisfying relationship – not only for me, but also for my sons and my wife.

At Rabbi Feller’s suggestion, my wife and I went to see the Rebbe and we met with him several times throughout the years. I also had the opportunity to attend a farbrengen in 770 Eastern Parkway, which the Rebbe led with enormous spirit, and I was invited to speak at a convention for Chabad emissaries, where I addressed a crowd of some three thousand men.

The first time we met the Rebbe was in 1971. I was not yet a US senator. In fact, I was not yet in public life at all back then. I was just a 41-year-old businessman starting to make my way in life.

When we entered his study at 770, I was struck by its appearance. When one thinks of the leader of a global movement, one would expect an office that’s at least somewhat grand. But the Rebbe’s office wasn’t grand at all. It was lined with books, and it was not very large.

The Rebbe spoke to my wife and I about education. He urged us to teach our children Torah and to raise them as Jews.

This was the recurring theme of all our meetings with the Rebbe. He would always remind us that the future of our people is with our children and that it is essential for the younger generation to receive a Jewish education. He also spoke about the importance of creating Jewish schools, and that is something I have helped with in Minnesota.

Actually, it was Jewish education that initially led me to become a real supporter of Lubavitch. I would go to many of the small towns in Minnesota, where we had stores, and there would be three or four Jewish families living there – and sometimes even fewer than that. I found that Lubavitch had reached out to all of them, and sent them tapes so that they had their own little “Sunday schools” and their sons could be Bar Mitzvah-ed. Rabbi Feller’s wife, Mindy, would also go out to many of these small towns, which impressed me because the rest of the organized Jewish community did not.

Later on, once I had become a member of the US Senate, the Rebbe continued to speak about the importance of education, not only in Jewish schools, but for all children. He believed that even in public schools there should be an element of G-dliness. He frequently suggested that there be a moment of silence – a moment for non-denominational silent prayer or reflection – at the outset of each day.

The moment of silence was something I believed in, and I went on to advocate for it as a senator. In 1983, Senator Jacob Hecht from Nevada and myself introduced some remarks the Rebbe had made on the subject into the Senate Congressional Record.

As the Rebbe himself explained in those remarks, to maintain the “civilized rules of law and order” that our freedom and human rights depend on, children need to be raised with a moral sense.

If we want our children to grow up to become “law-abiding, ethically minded, productive citizens” they need to have a deeper sense of right and wrong. The moment of silence is meant to give them time to think about the Supreme Being who watches over how we act – “the Eye that sees and the Ear that hears,” was how he put it – or, with the guidance of their parents, to think about their purpose in life, or their plans for the day.

Unfortunately, the people who guide the education of the United States don’t feel that any type of religious experience, or even the mere mention of religion, is appropriate in schools. That’s too bad, because religion, of course, plays a most important role in society as a whole, as well as in the lives of individuals, so young children must understand its significance. As the Rebbe said, a moment of silence at the beginning of the day would go a long way in “restoring this great land to its ethical moral ideals, thereby enhancing the welfare and safety of all citizens.”

I had another interesting experience in the Senate under similar circumstances, but on a separate occasion. I had been asked to read into the congressional record a talk the Rebbe had given about the commandment to “be fruitful and multiply.” At the time, many people were concerned about the country’s growing population, and were advocating for “zero population growth.” In response, the Rebbe spoke about the importance of having large families. He had Rabbi Feller ask me to read his speech into the record, which I was very pleased to do.

This then caused the wife of one of the chief executive officers of General Mills, a large national corporation located here in Minnesota, to criticize me. In a very harsh letter, she called the Rebbe “an archaic religious leader,” and said that he knew nothing about the subject.

They were supporters of mine, and it was a difficult letter. But, I responded rather directly, and said that the Rebbe had a great sense of modern life and was not, by any means, archaic.

“The rabbi who saw in his lifetime the murder of a third of his people,” I wrote to her, “has every right to speak about multiplying and increasing the number of the Jewish nation.” (Though I should note, the Rebbe was speaking about all people and not only Jews.)

The Rebbe’s message was an important one and – as someone who knew a good deal about the subject – the Rebbe was fully justified in expressing those views. Population growth was not the threat that this lady thought it was.

Personally, the Rebbe’s teaching about raising Jewish families was one we took to heart: We had four boys, one of whom is now quite observant. That may be small by Lubavitch standards, but nevertheless they have caused us to become proud grandparents many times over. And we have followed the Rebbe’s advice to provide them a Jewish education – we’ve raised them all to be very conscious of our Jewishness, of Chabad, and of the Land of Israel and what it means to our people.