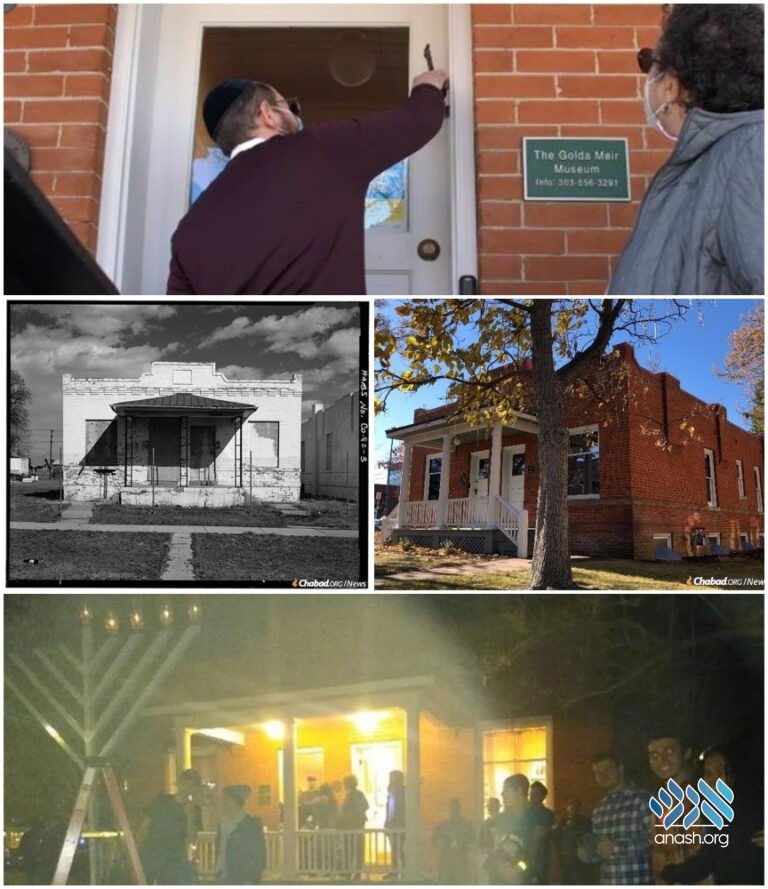 The Colorado home of Israel’s first female prime minister will host classes and activities by Chabad-Lubavitch of Auraria Campus after was rededicated earlier this month.

The Colorado home of Israel’s first female prime minister will continue to have an impact on the Jewish world. The Golda Meir House Museum in Denver, where Meir lived as a teenager, was rededicated earlier this month to serve as a center of Jewish learning and engagement for area Jewish students and will host a growing number of classes and activities provided by Chabad-Lubavitch of Auraria Campus.

The house is located on the grounds of the 150-acre Auraria Higher Education Center (AHEC), which provides shared services, resources and facilities for three distinct higher learning institutions—the University of Colorado, Denver; Metropolitan State University of Denver; and the Community College of Denver—whose Jewish students and faculty have been served by Rabbi Yisrael Moshe and Aura Ort, co-directors of Chabad of Auraria Campus, since 2005.

Campus officials have reimagined the museum as a place of Jewish learning, social gatherings and inspiration. It’s a vision that the Orts, students and community leaders are excited to be a part of.

“Who would have thought that my son could get a Jewish education on the Auraria campus?” asked Israeli-born Colorado State Rep. Dafna Michaelson Jenet at the building’s dedication ceremony on Jan. 10. “Not only is he getting one here, but he is taking part in the Sinai Scholars program in this very house, and I couldn’t be happier.”

Eytan Michaelson told Chabad.org that “learning about my Jewish heritage in Golda Meir’s home was really meaningful. She was an amazing woman who accomplished so much, and her home is the perfect place for us to gather as a community.”

The museum is Golda Meir’s only known existing residence in the United States and houses original Jewish artifacts, including a mezuzah and tzedakah box used by Meir herself. “We hope to inspire the Jewish students of AHEC to be the next generation of Jewish leaders in their communities and throughout the world, like Golda Meir,” said Rabbi Ort.

A Landmark on the Verge of Collapse

Golda Meir was born Goldie Mabovitch in Kiev, Ukraine (the Russian Empire at the time), in 1898. In 1906, her family fled to the United States and settled in Milwaukee. She would later recall that she wanted to go on to high school and become a teacher, but her parents had arranged a marriage for her without her consent, and married women were not permitted to teach in Wisconsin schools. In 1913, she ran away from home to pursue her education in Denver.

She moved in with her married sister Shayna, less than a mile from the present Auraria Campus. It was here that she met her future husband, Morris Meyerson, and began to develop her political philosophy, eventually deciding to emigrate to what was then British Mandatory Palestine.

For years, Meir’s former home stood dormant and was on the verge of demolition several times. But in 1988, with the help and efforts of a small group of committed citizens, the house was saved and transferred to the Auraria Campus, where it underwent final restoration and was named a historic landmark in 1995.

A Promise of More Programs to Come

Ort told those at the dedication that he and his wife are grateful for the warm support of the museum’s new executive director, Lena Fishman, and looking forward to Chabad continuing to take part in such a meaningful and unique initiative. He then had the honor of affixing the home’s mezuzah.

The Orts have recently hosted Chabad events at the site, including this year’s Chanukah event, and are looking forward to hosting even more Shabbat programming, Jewish learning classes and social gatherings. “We hope to strengthen the relationship with AHEC and the Golda Meir House leadership to do amazing things for our students in the upcoming semesters and years,” said the rabbi, giving a special thanks to Leora J. Wechsler, General Counsel for AHEC , as well as Colleen Walker, CEO of the Auraria Campus.

Aura Ort says she is pleased and proud for Chabad to hold its programs in Golda Meir’s former home, and that it has another benefit as well: “We hope that all past and future Chabad events, activities and classes will be an aliyas ha’neshama (‘ascent of the soul’) for Golda Meir, and that we continue to grow in her merit.”