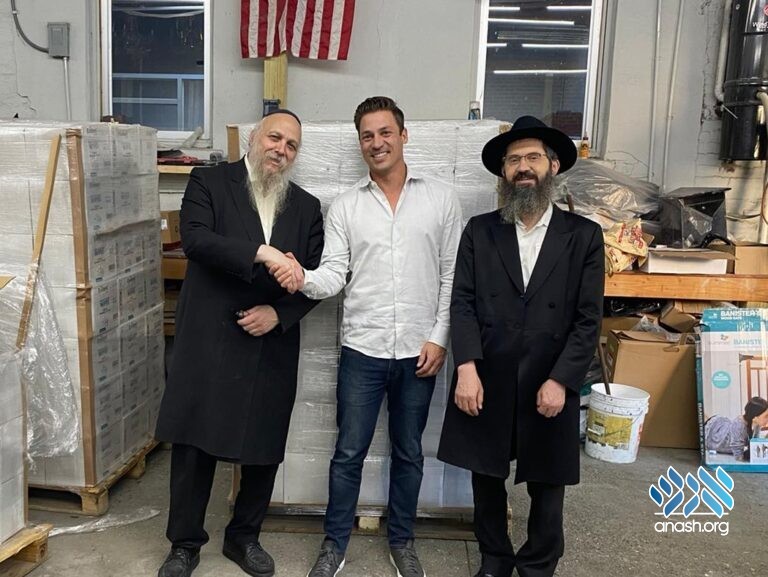 Mr. Scott Riedl of the California-based Sonance Foundation traveled to Crown Heights to meet with recipients of counter wipes distributed by his charity organization and to plan future cooperation.

Mr. Scott Riedl of the California-based Sonance Foundation traveled to New York, where he spent two days meeting recipients of counter wipes distributed by a coalition of charities.

54 containers of wipes were distributed by the Global Jewish Assistance and Relief Network and the Sonance Foundation to many diverse non-profits across the East Coast, including Food Banks, Boys and Girls clubs, as well as many Crown Heights Shuls and schools.

As reported on Anash.org, 1,575 cases (9,450 canisters) of surface wipes were distributed last week to Crown Heights schools including Oholei Torah, United Lubavitch Yeshiva, Bais Rivka, Darchei Menachem, Bnos Menachem, and Bais Chaya Mushka. Another 735 cases were made available for other neighborhood Mosdos and all community Shuls.

In Crown Heights, Mr. Riedl was warmly received by Rabbi Eliezer Avtzon of Global Jewish Assistance and Rabbi Baruch Mishulovin of Eshel and Or Menachem, who thanked him on behalf of local organizations. The group also discussed potential cooperation in many other areas of common interests.