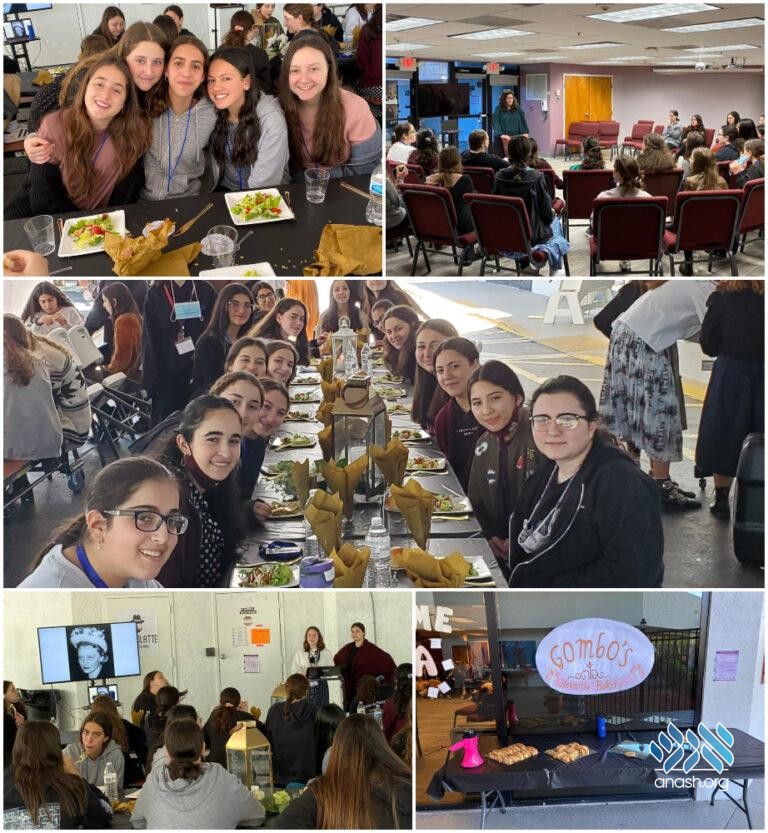 On every other year, the Rohr Bais Chaya Academy of Florida would travel to New York for the Kinus Hashluchos. This year, however, that was impossible, so the girls recreated the Kinus at their school back home.

Written by a Bais Chaya Student

This past Thursday, our school, Rohr Bais Chaya Academy had a major change of tradition. Every year, without fail, school would close for Chof Bais Shvat and its students and faculty would flock to Crown Heights. But this year, Crown Heights came to us. School remained open and a half-day program was meticulously planned in the style of our own Kinus!

The Chassidishe Yomim Tovim committee, or CYT for short, packed the hours with the goal of instilling a newfound appreciation for the Rebbetzin, her life and her ways, something we were all sorely missing due to the lack of an opportunity such as Chof Bais Shvat to learn about who she was in depth!

The day began with “registration” whereby each girl picked up her personalized Shluchos badge and then headed into the Shul for a group Davening along with Tanya, Hayom Yom and a Rebbe video on the topic, והחי יתן אל לבו, our theme for the day. Straight from davening, the girls made their way to our very own Bunch O’ Bagels themed breakfast along with a Chocolatte hot drink stand, complete with baristas and the works!

Something unique about RBCA is that our teachers are not just teachers who teach the curriculum and grade your tests. They are dedicated to creating modes of learning in ways we can all enjoy. Today we were privy to one such way- a Teachers Shlichus skit that was on the mark!

Just like any year at the women’s Kinus, our high schoolers enjoyed three very inspiring workshops by Mrs. Chani Lebovics on Shidduchim and marriage- in the right way, Makeup By Mirel on tips and tricks and the beauty of a Jewish woman and a learning workshop by three teachers in which everyone learned a very apropo Sicha in regard to the Rebbetzin (don’t worry, there were breaks in between when everyone was able to stop by our homemade Gombo’s stand!).

All the girls from every grade came away from these workshops inspired and ready to share what they took from it by our reflections where sparklers were the means of passing on the fire as they shared what most impacted them. A Rebbetzin Chaya Mushka songbook set the vibe and soon it was time for banquet! Fully equipped with appetizers, main course, dessert, keynote speakers, games, Kinus songs and a lit roll call, no one felt like they missed out on a thing this year!