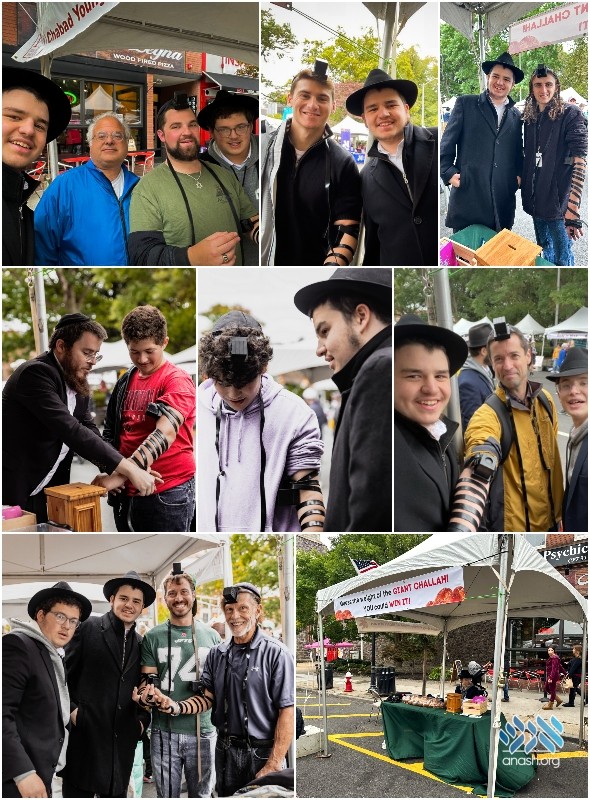 A giant challah stationed at the annual Morristown Festival had festival goers stopping and guessing its weight in a chance to win. Many ended up laying tefillin as well.

Every year, at the beginning of the fall, thousands visit Morristown, NJ. The Morristown Festival on the Green draws thousands from all over New Jersey. The streets of downtown are filled to the max.
As usual, Rabbi Moshe Gurevich, who directs Chabad Young Professionals of Morristown, together with a group of Bochurim from the nearby Morristown Yeshiva, set up a unique booth to draw in Jews from all walks of life.

In the booth, there was a large, eye-catching Challa. Passersbys had a chance to take a shot at guessing the weight of the Challa. While there, they were given the opportunity to put on Tefillin, as well as invited to join the upcoming Yom Kippur services.

“It was the most popular booth at the fair,” noted one attendee. In just a few short hours, over fifty men put on Tefillin, ten of them for the first time. Hundreds of holiday guides were distributed.
“It’s really amazing how one Challa led to so many Bar Mitzvahs,” said student Shneur Slonim. “It was beautiful to see over six hundred stop by, many of them seizing the chance to reconnect with Judaism,” added Shmulie Grossbaum.

“I would like to extend my gratitude to all the Bochurim who participated,” Rabbi Gurevich remarked. “It really would not have been possible without them.”