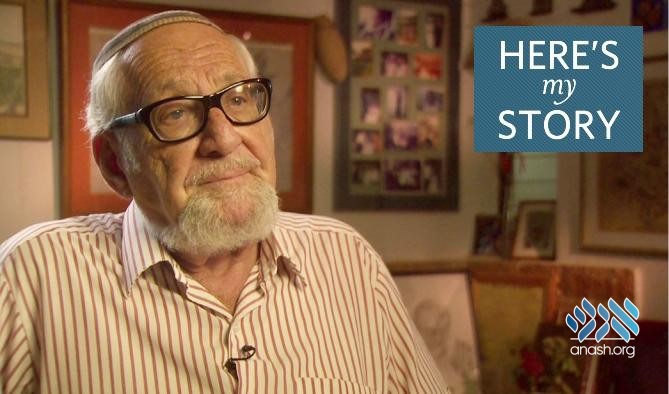 When Mr. Tzvi Slonim was studying in the United States, he merited a 3-hours long yechidus with the Rebbe. Much to his surprise, the Rebbe took a special interest in the school he was running for delinquent girls.

After a career in criminal justice, Mr. Tzvi Slonim (1934-2019) became one of the leaders of the movement for the settlement of Judea and Samaria. He also co-founded Ariel University and the Land Redemption Fund. He was interviewed in his home in Efrat in August of 2010.

In my younger days, I worked in the field of special education for many years, mainly with teens with criminal backgrounds. Because of my work, I was invited in 1964 to participate in the first course in criminology offered by Bar Ilan University, where I studied with other criminal justice professionals, including juvenile court judges, police officers, probation officers, etc.

As part of my criminology studies, I won a scholarship for a year of advanced training in the United States. While there, I decided to use this opportunity to meet with a few leaders of American Jewry, in order to ask them questions which were on my mind as a young Israeli Jew.

I especially wanted to meet the Lubavitcher Rebbe because of my family connection. Like him, I am a descendant of the Alter Rebbe, the 18th century founder of the Chabad Movement, although unlike him, I trace my family tree through the Alter Rebbe’s granddaughter, Rebbetzin Menucha Rochel Slonim, who came to Israel in 1845 and settled in the city of Hebron.

When I called the Rebbe’s secretariat and asked for an appointment, I specified that I didn’t want to see the Rebbe as a chasid – just to introduce myself, ask for a blessing and leave; I wanted to have a proper conversation with him, without being pressed for time.

It took eight months before my request could be granted, when a group of donors from abroad cancelled due to a delayed flight. I came at a moment’s notice and, upon arrival, was advised how to behave before the Rebbe – not to sit in his presence, not to try to shake his hand, etc. These rules seemed strange to me, but I promised to obey them.

I stood before the door of the Rebbe’s office full of anticipation, and suddenly the door opened from the inside and I saw the Rebbe standing before me. He extended his hand and momentarily I didn’t know what to do. Here he was extending his hand to me, so how could I not reciprocate? Next, the Rebbe invited me to take a seat, but as per instructions, I continued to stand. Only when the Rebbe himself sat down did I sit down also.

One of the things that especially impressed me about the Rebbe’s office was the number of books. Not only were the walls lined by bookshelves, but on the Rebbe’s desk there were also big piles of books. I glanced at the spines and was amazed by the variety – these were books on all types of subjects and in a variety of languages!

The conversation between us took place mainly in Yiddish and English with a bit of Hebrew thrown in. Although I hadn’t corresponded with the Rebbe prior to this, I was surprised to learn that the Rebbe knew who I was and what I did. Not only that – the Rebbe showed great interest in my work and posed many specific questions.

I was impressed by his knowledge of criminology. For example, at a certain point in the conversation he asked me, “Are you familiar with the writings of Cesare Lombroso?”

Lombroso was an important Jewish criminologist who worked in Italy in the late 19th century, but I will estimate that most of the criminologists in the world have never even heard of him, much less be familiar with Lombroso’s theories which the Rebbe discussed with me.

The Rebbe also wanted to know about the institution for girls that I was managing at the time and asked many questions about it. He was happy to hear that I arrange Shabbat meals for the girls, as well as a Passover Seder, and that on Rosh Hashanah I bring in a minyan of men so the girls can participate in holiday prayers.

Our conversation took about three hours, and we covered other topics as well, but it was clear to me that the Rebbe was most concerned about the delinquent girls. I didn’t anticipate that the Rebbe would be interested in such matters at all, but he really wanted to know about every aspect of their treatment and to hear detailed descriptions of the girls and their struggles. He asked pointed questions about individual students, endeavoring to draw individual profiles in order to understand the difficulties that each was experiencing. This required me to relate some very harsh facts, but the Rebbe didn’t shy away from any of it. All in all, it was a scholarly dialogue with a knowledgeable colleague, and it made a very strong impression on me.

At a certain point the Rebbe asked me, “Tell me, how do you open and close the door?” At first, I didn’t understand the intent of his question, so I asked him to clarify. He explained: “Your job is like a plumber; you are forced to thrust your hands deep into the muck every day. So when you finish the workday and close the door of the institution to go home, how do you open the door of your house, where your wife and children await you, without allowing the problems of your work to enter with you? How do you deal with the transition? How do you ensure that the difficulties and complexities of the institution are not transferred into your private environment?”

I explained to the Rebbe that I make a total separation between my work and my home, and that my family relationships remained unaffected. I added that I had succeeded in influencing the institution more than it has influenced me. The Rebbe looked at me with admiration and said that he would like to meet my wife and give her a blessing.

(Unfortunately, we didn’t get to see the Rebbe before returning to Israel. In a letter that he sent me afterwards, he admonished me for not coming to say goodbye.)

At the end of the meeting, he gave me a very special blessing and said, “The work that you do is surely on a G-dly path.” I hadn’t gone to the Rebbe for blessings, but I received them with open arms and thanked him from the bottom of my heart.

I had the opportunity to see the Rebbe a few more times at various farbrengens when I visited New York, and I also maintained contact through letters, but that was the only time I met with him in a private audience. I left that audience with the impression that I had met a giant of a man who, without a doubt, strengthened my faith and influenced me down the road.