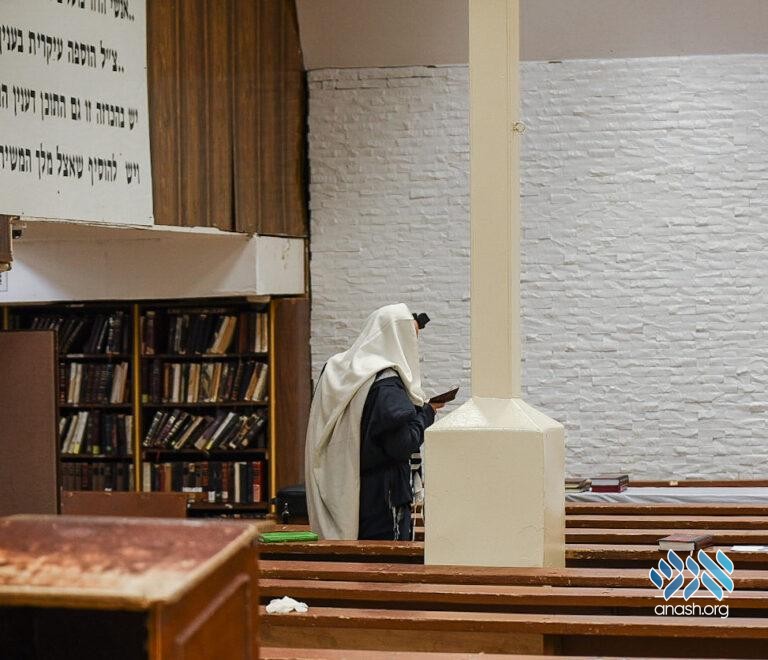 The Torah portion of Bo contains many mitzvot that commemorate the Exodus from Egypt including the mitzvah of Tefillin. Rabbi Aryeh Citron explains the proper place on the head where Tefillin must be placed.

The Torah portion of Bo contains many mitzvot that commemorate the Exodus from Egypt. Two of these are the mitzvot of the hand Tefillin and the head Tefillin, as it says (Exodus 13:9), וְהָיָה לְךָ לְאוֹת עַל יָדְךָ וּלְזִכָּרוֹן בֵּין עֵינֶיךָ“ – And this shall serve you as a sign on your hand and as a reminder between your eyes” and (ibid 16) “וְהָיָ֤ה לְאוֹת֙ עַל־יָ֣דְכָ֔ה וּלְטוֹטָפֹ֖ת בֵּ֣ין עֵינֶ֑יךָ – And so it shall be as a sign upon your hand and as a symbol between your eyes.”

Our sages (Menachot 37b) explained that the head Tefillin should be positioned above the hairline corresponding to the space between one’s eyes. They based this on the fact that the same words (בֵּ֣ין עֵינֶ֑יךָ) are used in a different context (Deut 14:1) to mean the area above the hairline.

This article will address the issue of whether or not the head tefillin must be placed exactly in the middle of the head.

The Sanzer Rebbe: Anywhere Between the Eyes

The Sanzer Rebbe wrote (Divrei Chaim O.C. vol. 2:6) that the head tefillin can be placed anywhere above the area that is between the outer edges of one’s eyes. He bases this on the following sources:

Based on this, the Sanzer Rav writes that checking the position of one’s head Tefillin with a mirror is a sign of ignorance. He seems to imply that in addition to the fact that this checking is not necessary in his opinion, it is also improper in light of the prohibition that men should not groom themselves in a feminine manner.

The Shulchan Aruch writes (Y.D. 156) that a man may not look in a mirror as this is considered to be a feminine act of grooming. It is only permissible under the following circumstances:

Despite this, the Ran (Avodah Zara, 9b D.H. Shomet) writes that Torah scholars generally refrain from looking at themselves in mirrors even when it is Halachically permissible. This Ran is quoted in the Beit Yosef Y.D. 156.

A Mirror for Tefillin

Based on the above, it seems clear that one may use a mirror to check one’s Tefillin as this is no different than using a mirror to check if one’s face is clean. Despite this, a Torah scholar may want to refrain from doing so. This would explain the wording of the Divrei Chaim that “looking in the mirror to check one’s Tefillin is a sign of ignorance.” He does not write that it is forbidden, rather that it is simply a sign of ignorance since learned people, i.e., Torah scholars, refrain from doing this. In addition, it is not even necessary in his opinion as explained above.

The Alter Rebbe: Precisely in the Middle of One’s Head

The Alter Rebbe writes in his Siddur (Hilchot Tefillin) “One should be very careful that they (the Head Tefillin) should be exactly in the middle of one’s head. Because they (Menachot 34b) said that Kadesh and Vehaya ke Yevi’acha should be on the right and that Shema and Vehaya im Shamo’a (the various scrolls placed inside the sections of the Tefillin) should be on the left. And in the Tefillin of Rashi, in which these sections are placed, there is only a small space between the right and the left. This is the ridge that is in between the section of Vehaya ki Yevi’acha and Shema. Therefore one should be very careful about this.”

Dayan Raskin of London (Siddur Admur HaZakein im Tziyunim Veha’arot, page 76 note 42) suggests that the Divrei Chaim did not see the siddur of the Alter Rebbe and that had he seen it he would likely not have disagreed with the Alter Rebbe.

Here is the explanation for the proof brought by the Alter Rebbe that the Tefillin must be in the middle of the head.

The Talmud says (Menachot ibid) that the four sections of the head Tefillin should be in the following order:

The Order According to Rashi

According to Rashi (D.H. Kesidran)  the order from right to left (when facing the Tefillin) is,

Here is an image from Chabad.org about this order:

Rashi’s understanding of the Talmud is that “right” and “left” are referring to the right and left side of the head of the person wearing the Tefillin. (See Siddur Admur HaZakein im Tziyunim Veha’aros.)

The Order According to Rabeinu Tam

According to Rabeinu Tam (D.h Vehkoreh), however,  the order of the sections of Tefillin from right to left (when facing the Tefillin) is

Here is an image from Chabad.org about this order:

According to this interpretation, there is no proof from this Talmudic passage as to whether or not the Tefillin must be placed in the middle of one’s head since the right and left are not referring to the person’s head but to the sides of the Tefillin.

The Rambam writes (Hilchos Tefillin 4:1), “Where is the Tefillin of the head placed? It is placed on that part of the crown of the head, where the hair adjacent to the forehead ends, and this is the place where an infant’s brain can be felt to pulsate (the fontanelle). The Tefillin needs to be adjusted so that it lies in the center of the forehead, in a line with the point between the eyes.” This is a clear support for the opinion of the Alter Rebbe.

The reason for the Rambam may be that if the Tefillin are on one side of the head, they are not considered to be “between the eyes“ but rather above one eye or the other (Minchat Shmuel by Rabbi Shmuel Weiss, Chelek O.C. 6).

The Shulchan Aruch (O.C. 27:11) echoes the words of the Rambam and writes, “The ketzitza (box of the Tefillin) must be aligned in the middle of one’s head so that it will be ‘between his eyes.’” The Mishnah Berurah adds that one should be careful about this matter since, according to many acharonim (later halachic authorities), if the tefillin are not in the center of the head one has not fulfilled one’s obligation.

Although, as mentioned above, according to Rabbeinu Tam there is no proof from the Talmud that the head tefillin must be in the middle of one’s head, in practice the Alter Rebbe was particular about this matter even when wearing Rabbeinu Tam’s Tefillin. This is evident from a story that the Lubavitcher Rebbe recounts in the Reshimot (172:20):

“The Alter Rebbe had his Talis and his Tefillin with him. He started to put on his Rabbeinu Tam’s Tefillin. When he put on his head Tefillin he looked at a silver cover of a snuffbox [that he would use as a mirror to check if his Tefillin were straight – see Likutei Sichot vol. 3 page 853]. In so doing, he turned his head from side to side. Those in the room were overcome with fear to the extent that those who were standing could not sit while those who were sitting could not stand. The Alter Rebbe remarked that the verse ‘And all the nations of the world will see you [and fear you’ (Deut. 28:18)] is referring to the head Tefillin [see Brachot 6a]). ‘They have become frozen like a pillar.’”

Perhaps the reason why the Alter Rebbe was particular about getting his Rabbeinu Tam head Tefillin straight despite the fact that there is no proof from the Talmud for this (according to Rabbeinu Tam) is because (as mentioned above) the Rambam writes clearly that the Tefillin must be in the center of one’s head.

Using a Mirror vs. Asking Someone Else to Check

It is noteworthy that the Previous Rebbe spoke (somewhat) disapprovingly of using a mirror to check one’s Tefillin. As he once commented (Sefer HaSichot 5704, page 111), “Not like those who look in a mirror to check that their Tefillin are straight, and they think that this is (meaningful) service of Hashem. Certainly it must be straight. But one can ask someone else to check it.”

It is possible that this comment was said at a time when Chassidim were particular not to look at their reflection in a mirror and that it was therefore inappropriate to do so for Tefillin since one can ask someone else instead. Whereas a man who does (occasionally) look at himself in a mirror may do so to adjust his head Tefillin as well.

The Lubavitcher Rebbe wrote (vol. 14 page 364) to someone who said that he had difficulty making sure that his Tefillin were straight, that he should ask someone else to check the positioning for him. He should rely on this person as this is the Torah law (that one may believe one witness regarding mitzvot).

It is possible that the Rebbe did not recommend the use of a mirror to this person as the person who wrote the letter seemed to have difficulty trusting his own judgment on this matter.