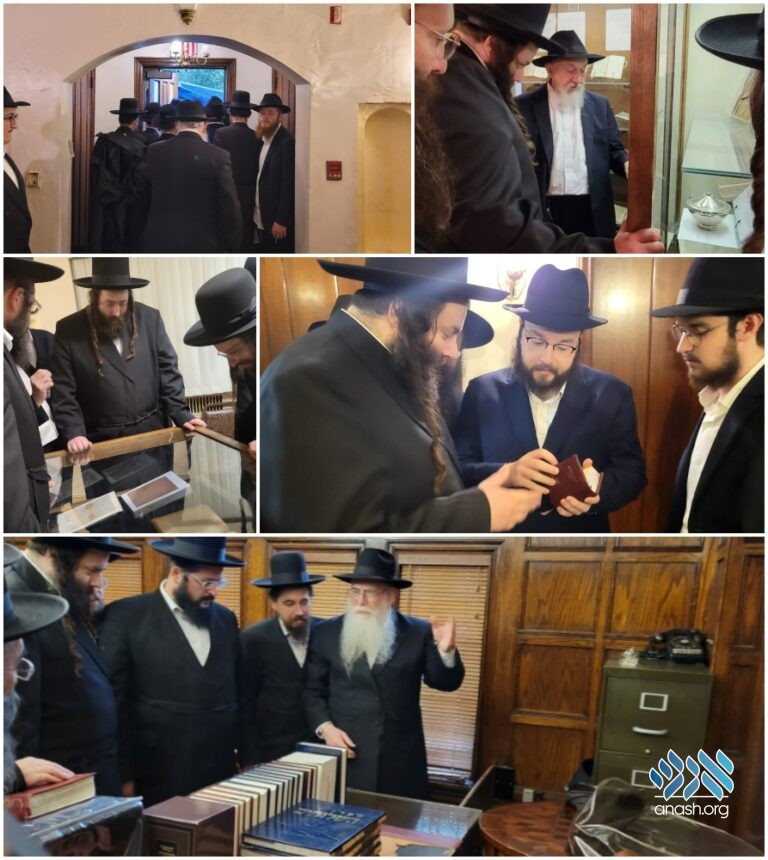 The Gerrer Rebbe’s son Harav Dovid Alter paid a visit to 770 on Sunday, where he was shown the Rebbe’s room and the library. He was gifted a Tanya printed in the original courtyard of the Gerrer Rebbes in Góra Kalwaria, Poland.

Harav Dovid Alter, son of the Gerrer Rebbe, paid a visit to Chabad World Headquarters at 770 Eastern Parkway on Sunday, accompanied by a group of gabboyim and chassidim.

The visit, arranged by activist Shmuly Butler, came following a earlier visit of Chabad rabbonim and mashpi’im to the Gerrer Rebbe in his Monsey residence, where he was staying ahead of the wedding of his granddaughter which took place nearby.

Harav Alter was greeted by Rabbi Chaim Boruch Halberstam of Vaad Bedek Habayis and Rabbi Mendel Eisebach, who directs the Chabad House in 770. Rabbi Halberstam opened the Rebbe‘s room specially for the visitors, and showed them some of the unique items in the room, including the table hand crafted by the Rebbe Maharash. Harav Alter then spent a few short moments davening in the sacred spot.

They then headed to the Central Chabad Library, where Chief Librarian Rabbi Berel Levine gave them an extensive tour of the exhibitions. Harav Alter expressed great interest in the items from the Chabad Rebbeim, and showed special interest in the seforim of the Rebbe’s father and the glosses that fill each page, written with ink prepared by the Rebbetzin Chana with great self sacrifice while they were in exile. Rabbi Levine also told Harav Alter about historic items from the Gerrer Rebbes which the library owns.

The group then went back to 770, where they were given a tour of the WLCC welcome center. Rabbi Halberstam showed Harav Alter a video he had personally filmed of a yechidus that his father, the current Gerrer Rebbe, had with the Rebbe.

On the way out of 770, Shmuly Butler gifted Harav Alter with a pocket sized Tanya that had been printed in the original courtyard of the Gerrer Rebbes in Góra Kalwaria, Poland. The Tanya, printed two years ago, was engraved with a dedication to Harav Dovid Alter.

Following the visit, Harav Dovid Alter expressed his admiration of Chabad and of the operations in 770.