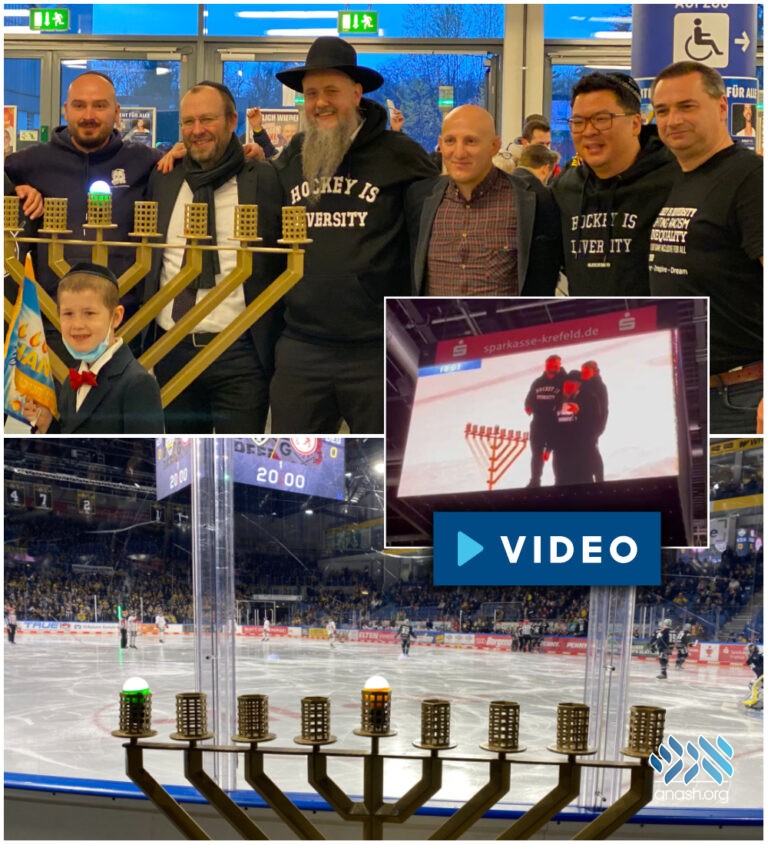 Rabbi Yitzchak Mendel Wagner and the Jewish community of Krefeld, Germany, brought the light of Chanukah to the ice at a German hockey game, in collaboration with the Krefeld Penguins and the Hockey is Diversity Association.

The Krefeld Penguins, a hockey team in the German Ice Hockey League, in collaboration with the Hockey is Diversity Association and the Jewish community in Krefeld, celebrated the first night of Chanukah during the home game against the Düsseldorfer EG in the Yayla Arena.

Rabbi Yitzchak Mendel Wagner shared a Chanukah greeting with the fans and lit the first light of the menorah. Samuel Naydych and Alexander Konev, members of the board of the Krefeld Jewish Community, were also present.

“Chanukah is the festival of light,” Rabbi Wagner said. “Light is exactly what we need most in these difficult times. This year, in cooperation with the Krefeld Penguins and Hockey is Diversity, we are delighted to be able to bring the light of Chanukah to the Yayla Arena on the ice and thus right into the heart of the city.”

Mark Thiel, press spokesman for Krefeld Penguins said, “We are very pleased to welcome the representatives of the Jewish community of Krefeld as well as Hockey is Diversity with us in the YAYLA Arena. Chanukah is probably the best known Jewish festival by name and yet the associated customs are rather unknown. It is a special honor for us that Rabbi Yitzchak Mendel Wagner lit the first light of Chanukah on our ice and brought us closer to the festival.”

Dr. Martin Hyun, Founder and CEO of Hockey is Diversity, said, “It is a great gesture by the Penguins to welcome the menorah, Rabbi Wagner and the board of the Jewish community in Krefeld to the stadium at the beginning of the Festival of Lights. To the best of my knowledge and understanding, this is the first time in the history of German ice hockey that the light of Chanukah is lit in an ice stadium. It is so important to create encounters. Only interpersonal encounters can break down prejudices.”