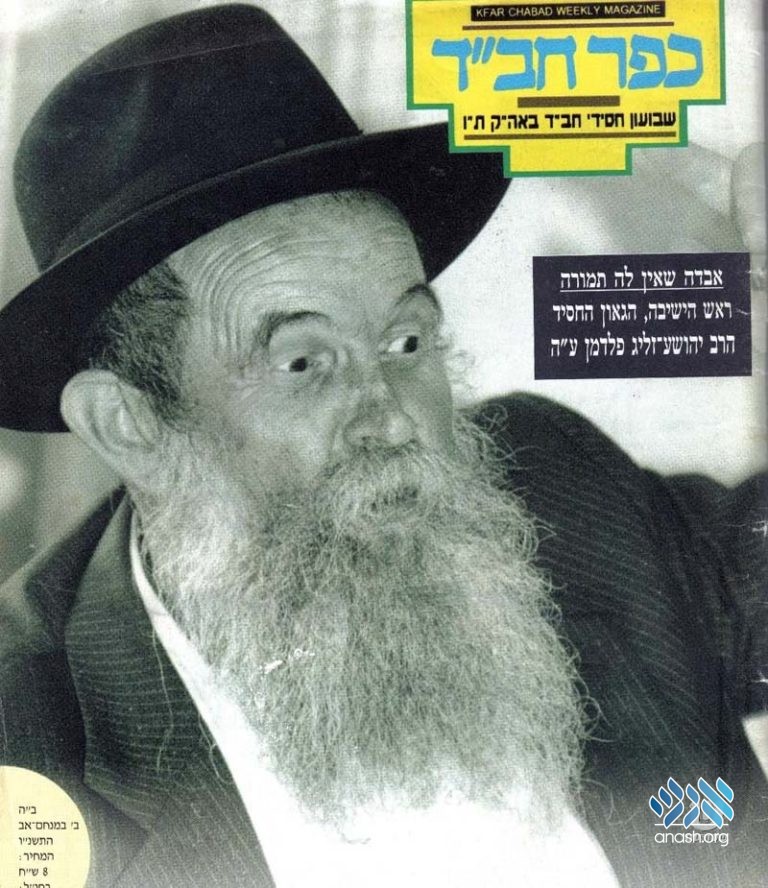 When Reb Zelig Feldman, Rosh Yeshiva in the yeshiva in Kfar Chabad, passed away suddenly at the age of 58 in 5756/1996, Reb Tuvia Bloy, may he live and be well, bemoaned the early passing of a dear friend who was a walking example of “true gaonus who hid his tzidkus.”

There have been many chassidishe gaonim (geniuses and talmidei chachomim) that managed to not flaunt their knowledge or boast of it. But with Reb Zelig Feldman (yahrtzeit 25 Tammuz) it was much more than that. The fact that he didn’t make a big deal of his knowledge and depth of understanding of Torah – nigleh and Chassidus – was commonplace throughout the generations of Chabad Chassidim. That there were no airs about him, never dressing the part of a Rosh Yeshiva, etc., is also something to be admired, but that’s not the what set him apart.

Of course, we would be remiss if we glossed over his genius. The comparisons to some of his contemporaries such as Rav Shmuel Rozovsky has been made often. That was in the nigleh realm. The same can be said for Chassidus as well, without the comparisons to some of his Litvishe contemporaries. The deepest concepts in Chassidus were so very clear to him. From a very young age, his genius was apparent to all. At his bar-mitzvah, he chazzered the ma’amar וידעת מאסקווא – תרנ”ז from the Rebbe Rashab, a feat that took some two hours!

It’s hard for someone to totally hide his vast knowledge of Torah when that’s his line of work. He taught for close to 40 years in several yeshivos, kollelim, shiurim for mekurovim from other frum circles, as well as shiurim for women and baalei tshuvah. But he shared only what was necessary – never showing it off.

Rav Boruch Shimom Schneersohn, the Rosh Yeshiva at the time in Lod, chose young Zelig to learn b’chavrusa all of the mesechtos of seder Kodshim with a great gaon from another yeshiva. The chavrusa would last all afternoon for four years, and that gaon was forever thankful to Reb Boruch Shimon for making that chavrusa connection. Reb Zelig was a young teenager when he was sent to test prospective Roshei Yeshiva who wished to join the faculty of the yeshiva in Kfar Chabad.

What set him apart was that the greatness in Torah – nigleh and chassidus – which was known, despite him not flaunting it, hid from others his great avodah and gemilas chassodim – and that was seemingly never known. It took a great genius to do that. Those that were able to see it recognized his avodah and his gemilas chassodim as similar to that of the early chassidim.

In these days of increased teacher-student sensitivity, Reb Zelig was ahead of his time, especially for a man of his academic stature. Never did a talmid feel that he was being spoken down to, or that he was lacking in understanding as to what Reb Zelig was speaking to him about. Reb Zelig made sure of that. Every conversation he had with talmidim and colleagues was a lesson learned – and everything in an almost original manner of thinking, never just going along with the masses. It wasn’t beneath to teach any person at any level of understanding.

Then, there was his chassidishe feeling to anything related to the Rebbe. the deepest feelings of hiskashrus. Reb Zelig was careful when traveling to the Rebbe for Tishrei to be there from before Rosh Hashonoh until after Shabbos Bereishis. So that he gets the full Tishrei experience. He would quip that those who come only for Simchas Torah is like a child that gets a bread and jelly sandwich from his mother. The mother shmears the bread with something sweet so that the child will get the nourishment that the bread provides. If the child just licks the jelly and leaves the bread then the whole point of the sandwich is lost…

So too was his davening filled with true chassidishe feeling; most people were unaware of the number of tears shed during his long tefillos in the Chabad style, especially during the yomim noraim of Rosh Hashonoh and Yom Kippur, that too he managed to hide from most observers.

As Reb Tuvia wrote in his article at the time of his passing, so too can we say now when we write this 23 years later: That which we posted here was a fraction of what could be written. The tragedy of his untimely passing was very apparent at that time but is no less relevant today, decades later.