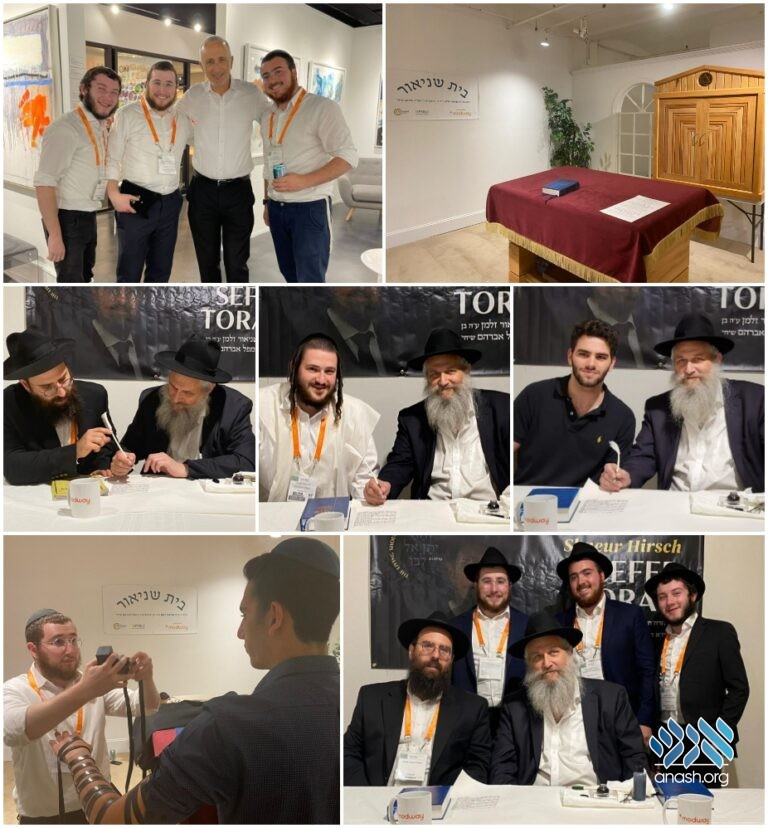 Ten years after Shneur Hirsch, together with his friend shliach Rabbi Yosef Plotkin, established a Jewish presence at the High Point Furniture Market, over 100 Jewish merchants gathered to inscribe letters in a Torah begun after his tragic passing.

Ten years after Shneur Hirsch, together with his friend shliach Rabbi Yosef Plotkin, established a Jewish presence at the High Point Furniture Market, over 100 Jewish merchants honored him memory, paying tribute to the man who vision had benefited them all.

The story began a decade ago, when Shneur Hirsch, vice-president and co-founder of Modway Furniture, began attending the High Point Furniture Market together with his partners Tuvia Greisman and Moshe Melamed.

High Point Market, held twice yearly in High Point, North Carolina, is the largest home furnishings industry trade show in the world, with over 10 million square feet by roughly 2000 exhibitors throughout about 180 buildings. But despite the huge numbers and the many Jewish merchants and exhibitors, Shneur quickly realizes that the furniture show was a desert as far as yiddishkeit was concerned.

Never one to let an opportunity pass, Shneur immediately reached out to his friend Rabbi Yosef Plotkin, shliach to nearby Greensboro, North Carolina, to create a place where Jewish merchants can come to daven, learn and enjoy kosher food. Shneur and his partners undertook to sponsor the activities together with Mr. Jonathan Schottenstein of Ohio

Over the next years, as each furniture show neared, Rabbi Plotkin and his wife Hindy would prepare tens of Kosher meals and prepare an area for the merchants to daven and eat. Many visitors would stop by each day of the market, using the area set up by the shluchim to rest, socialize with fellow Jewish merchants, grab a bite and attend a minyan.

The fall market of 2020 was no different than any other, as the Plotkins greeted their many guests and supplied them with kosher food and their Jewish needs. But then came the last day of the market, and with it the devastating news that Shneur, the man behind their activities, tragically passed away.

Half a year later, with the spring market coming closer, the Plotkins decided, that with the furniture industry, and furniture market, playing a big part of Schneur’s life, it would be only right to pay tribute to him at the upcoming market. Rabbi Plotkin brought down bochrim Shneur Bergstein, Zalman Koval and Menashe Treitel to help with activities. Right at the start, they dedicated the the shul at the Furniture Market in memory of Shneur, naming it “Beis Shneur.”

He also arranged that “Shneur’s Torah”, being written by the Hirsch family, would be brought to the market together with Crown Heights Sofer Rabbi Dovid Ehrentrei. During one day of the market, over 100 people gathered to pay tribute to the founder of the “Chabad Showroom” at High Point Market, and each participated in the Torah by writing their own letter.

“It was especially special to see that the participants covered the whole gamut of the Jewish community; Chassidish, Litvish, Sephardic, religious and those who aren’t yet religious,” Rabbi Plotkin told Anash.org. “For many it was a very emotional experience.”

The letter writing was followed with a delicious dinner prepared by Rebetzin Plotkin.

Michael Rollhaus, one of the participants, wrote a message to Rabbi Plotkin describing his impressions from the event and the service Chabad provided.

“Writing a letter in a Sefer Torah was certainly was a highlight [of the market]! In the days leading up to the market, I was preparing my kosher food for my 3 days away from Queens, New York, consisting mainly of sardines and canned tuna. Then I had an idea to check to see if there was any information on kosher food nearby by calling Chabad. Not only was there food and a minyan at the Market, with comradeship with all types of Yidden, but I also got to write an oss (letter) in a Torah! WOW!”