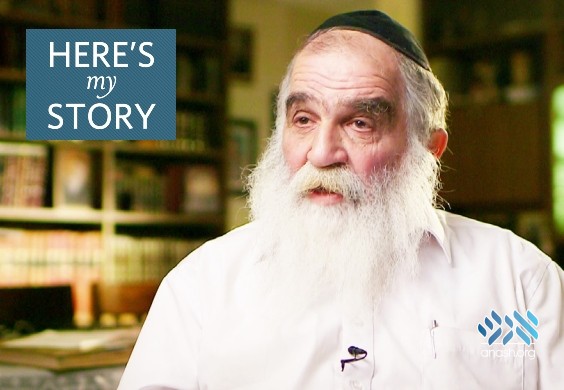 Rabbi Moshe Edreyi has served as a counselor and teacher at Beit Sefer Lemelacha in Kfar Chabad. Over the years, he was privileged to receive significant guidance from the Rebbe regarding his work with students and staff.

Rabbi Moshe Edreyi has served in various positions in the Kfar Chabad Vocational School from 1961 until 1996 and continues to be in touch with many of the alumni of the school. He was interviewed in his home in Kfar Chabad in January of 2016.

I was eleven years old when my family emigrated from Morocco to Israel. My father had passed away three years before, and despite his intense wish to settle in the Holy Land, he did not merit it. We arrived by boat in Haifa, and from there we were sent to a transit camp in Ashkelon.

Shortly after we got there, I went out to help earn money that my family badly needed. I stood in front of the local market with two buckets of ice and fruit syrup, selling drinks. One day, Rabbi Yisroel Leibov, the chairman of the Chabad Youth Organization, came by and saw this boy with a yarmulke working so hard. He felt sorry for me, and he waited until I was done, so he could come home with me to the transit camp.

He convinced my oldest brother Nissim, who functioned as the head of our family, that I and my other brother Yaakov should be enrolled in a Torah academy in Lod, and this is how my connection with Chabad began.

In 1961, after I had been studying in Lod for six years, Rabbi Mordechai Levin — who was the principal of the vocational school in Kfar Chabad — came there and he recruited me for his school, Beit Sefer Lemelacha. This school, which had been founded by the Rebbe six years prior, had been the target of a terrorist attack in 1956, with one teacher and five students killed and another ten wounded. Since that time, the school had greatly expanded at the Rebbe’s direction, and although I thought at first that my stay in Kfar Chabad would be short — just a few weeks — it proved to be a commitment lasting thirty-five years. In fact, I have dedicated my life to that vocational school, owing largely to the guidance I received from the Rebbe throughout the years.

In 1966, I came to New York for the first time to see the Rebbe along with my former classmates from the Lod yeshivah. They would be staying on for six months to study in New York and I really wanted to join them, but the Rebbe made it clear that I should return to Israel. Clearly, he understood even then that my life’s mission was to work for Beit Sefer Lemelacha, which is what I ended up doing — both as a counselor and as a teacher.

In 1970, I got married. My wife was from England and the wedding took place there but, afterwards, we came to New York and had a private audience with the Rebbe. At that time, my father-in-law, Rabbi Yechezkel Unsdorfer, wrote a long letter to the Rebbe, asking him to instruct me to drop my responsibility as the dorm counselor at the vocational school and to just focus on teaching Torah. When we went in to see the Rebbe, I handed in this letter but, right at the outset, before the Rebbe had even seen the letter, he blessed me by saying, “You will overcome all the obstacles, both internal and external, and continue to educate, and with tremendous success.”

Over the years, I would often write to the Rebbe, reporting on what was happening at the vocational school and about my work with the alumni, and I was privileged to receive many encouraging responses from him.

The school had been founded by the Rebbe early on in his leadership of Chabad — just four years after he assumed his role as the Rebbe —and his unique interest in every detail of this institution is well known, as one can readily discern from reading the many letters concerning Beit Sefer Lemelacha that have been published.

In 1974, I visited the Rebbe and prepared a few questions ahead of time regarding my work, including a question suggested by Rabbi Yeshaya Gopin, who was the principal at the time, how we could best promote the school to recruit top students.

The Rebbe’s answer was that there was no need for any special advertisement, for by employing excellent educators, we would automatically attract excellent students. He said that if we did so, we would double our enrollment. (At that time, we already had over 500 students in the institution.) “So you don’t need to haggle with desirable teachers over their salaries,” he said, “because they will bring in more students, which will automatically increase your funding.”

The Rebbe’s general advice to us was to treat our students the same as those who attend regular Chabad yeshivahs. He emphasized that there should be no difference between how educators relate to a student in a vocational school and a student in a yeshivah.

When I asked for his guidance regarding difficult students, the Rebbe responded that one can’t make a blanket rule, as it depends very much on the individual personalities involved. He recommended asking other schools about their strategies and learning from their experiences.

Among other things, I wrote to the Rebbe about the heavy workload that the school counselors have, and I mentioned that a counselor who wants to do his job well and with dedication must be there from morning till night. The Rebbe responded that although hiring more counselors would cost more money, it was a good thing to do since — just like hiring the best teachers — it would increase enrollment.

When I reported the Rebbe’s answer to the administration, I was asked how this would work practically — namely, which of the two counselors would be the one in charge? I suggested that the Rebbe’s intention was that both counselors will always be concerned with the students, but that there would be a division of labor similar to the division of labor between a mother and a father, who are obviously always concerned with how their children are doing, although the actual work gets divided up between them at different times.

The administration then wrote to the Rebbe to confirm that this is what he meant, and he did.

The Rebbe noticed that I mentioned my students along with my own children, and he said that it was good that I thought of them as my children. He quoted the Talmud which states: “Anyone who teaches Torah to someone else’s child is regarded as if he had given birth to that child.”