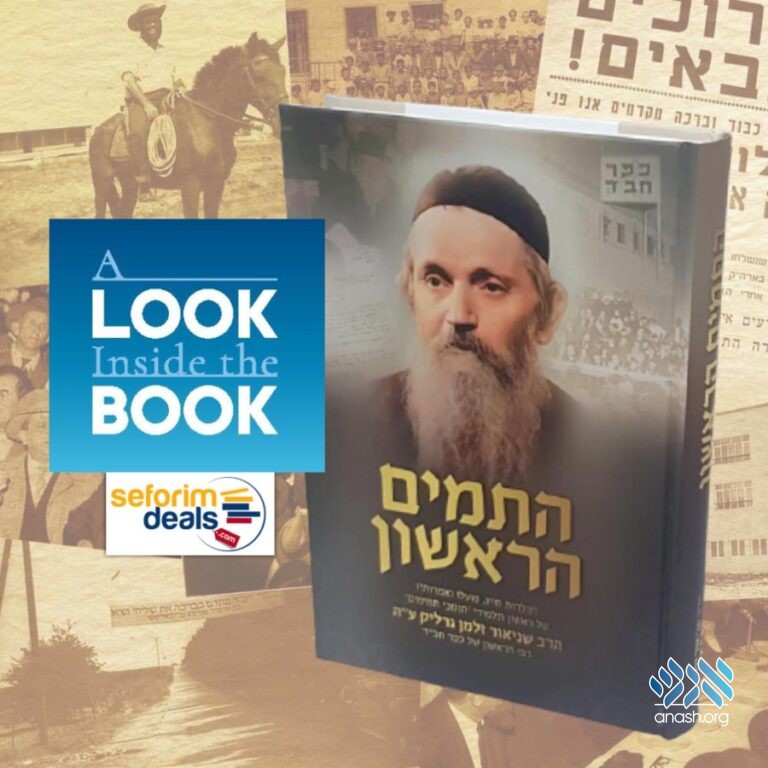 A Look Inside the Book: From his time as part of the original group of Tomchei Tmimim in Lubavitch to his decades as rov of Kfar Chabd, Harav Shneur Zalman Garelik was somewhat of a legend in Chabad circles. A new book attempts to tell us his story.

A Look Inside the Book is an Anash.org feature that takes a look at what’s new on the shelves of Seforim stores, and reviews recently printed seforim and books. The feature is presented in collaboration with SeforimDeals.com

Hatomim Harishon tells us the life story of the first Rov of Kfar Chabad, Harav Shneur Zalman Garelik, known in his lifetime as “Shneyer der Rov.” This is the author Shneur Rabinovitch’s second book, after Reb Avraham Hersh, about R. Avraham Hersh Cohen of Yerushalayim, and is published by the Garelik family. R. Garelik’s long life spanned generations and countries, and his story makes for an interesting read. In this review we will first outline the contents of the book and then comment on its methodology.

R. Garelik was born into a chassidishe family in the town of Rogatchov in White Russia, in 5640. When the Rebbe Rashab founded Tomchei Temimim in 5657, he became one of the first temimim, lending our book its name.

A few years later, the Rov of the town of Berezne in the Chernigov region passed away at a relatively young age, and in his will, he asked that his position be filled by the eventual husband of his marriageable aged daughter. Such an arrangement may sound strange to contemporary readers, and the author would have done well to give references about this practice that was not unusual at the time (for some examples, see the linked blog post by Yehoshua Mondshine). As one of the outstanding students of the new Tomchei Temimim who had received semichah, R. Garelik married the orphaned girl and became the Rov of Berezne in 5662.

These were turbulent times for the Jews in Russia, and these difficulties were reflected in R. Garelik’s first rabbonus. We read of repeated pogroms and the challenges of increasing secularization among the youth. After the Communist revolution persecution of Yiddishkeit got progressively worse, and in 5687 R. Garelik was forced to flee his post and move to Snovsk where he served as an unofficial Rov.

Like many Russian Jews, during World War II R. Garelik fled to Uzbekistan, settling in Tashkent where he served as the Rov of the chassidishe refugee community. Under the terrible conditions of poverty and hunger, R. Garelik built a mikvah, gave shiurim, and administered a tzedakah fund, even sending money to his son-in-law’s brother R. Shimon Trebnik, the Rov of Haditch at the time.

Leaving Russia together with hundreds of other families of chassidim in 5707, R. Garelik continued to serve as a Rov in the various DP camps he found himself in. We read a letter he wrote to the Friediker Rebbe from Paris, describing how he established shiurim in Gemara and Chassidus, and would even make the rounds knocking on people’s doors in the morning to wake them for the shiur.

In 5709, R. Garelik settled in the newly established Kfar Chabad and was immediately asked to serve as its Rov. He held this position for the next 25 years, shaping the character of the village in its formative period.

In Kfar Chabad, the seasoned Rov encountered new halachic issues such as shemitah and the other mitzvos hateluyos baaretz. R. Garelik corresponded with the leading poskim in Eretz Yisrael about the questions of shemitah in an agricultural village such as Kfar Chabad, and despite mastering these topics himself, he would humbly defer to other authorities on these matters, saying that in this regard he is like a junior rabbi. In one interesting story, we read how the elderly Rov traveled with a local farmer by train and bus to Yerushalayim to pose a shemitah related question to R. Tzvi Pesach Frank.

As the Rov of a chassidishe community where observance of Shabbos and kashrus was a given, R. Garelik said his main role is to ensure people participate in regular shiurim and don’t speak during davening (p. 270). In addition to the regular shiurim he delivered, R. Garelik also arranged for others to give shiurim, and he was particular to sit among the public and attend the public shiurim held in the main shul.

Talking during davening was a problem that he constantly focused on, and he would often rebuke the public and individuals about this. When he asked the Rebbe in yechidus whether the great energy he expended on this issue was worthwhile, the Rebbe strongly encouraged him to continue.

From the many stories told about his leadership, a picture is drawn of a Rov who was determined and uncompromising, but also deeply sensitive. He was a genuinely humble and unassuming man but also knew to insist on respect for his position. We read his letter to the Rebbe about the difficulty anash had with accepting the authority of a Rov because many of them think they are greater Chassidim than the Rov. In response, the Rebbe emphasized the absolute authority of the Rov and his ability to influence all of the members of his community (p. 258).

As the elder Rov of anash in Eretz Yisrael, R. Garelik devoted himself to training young Rabbonim, raising an entire generation of new Rabbonim. In this book, we read the testimonies of his students, such as his successor R. Mordechai Ashkenazi of Kfar Chabad, and R. Yehuda Yeruslavski of Nachalas Har Chabad, about the deep influence R. Garelik had on them.

R. Garelik was very conscious of his age, despite his good physical health and mental alacrity. In a letter written while still in his sixties, he already expresses concern about his health and humbly suggests that his memory and power of concentration are not what they used to be. He raised his worry about his age when he hesitated to accept the position of Rov of Kfar Chabad, but the Friediker Rebbe dismissed his concern, telling him that in matters of avodas hakodesh one must always feel young in spirit (p. 97). In later years he wished to retire, but the Rebbe refused to hear of it. Ironically, the old age that R. Garelik was concerned about never felled him, and his eventual death weeks before his 94th birthday was the result of a tragic car accident, together with three other chassidim.

The final chapters of Hatomim Harishon are devoted to independent themes. Chapter 11 contains the many letters R. Garelik received from the Rebbe, some of which were not previously published in Igros Kodesh.

R. Garelik was known for his sharp wit, and some of his incisive vertlach, anecdotes, and sayings are collected in a dedicated chapter. A few of the sayings recorded here are generic and could have been left out, and the sound advice R. Garelik is reported to have given about how to rebuke others by emphasizing their virtue and the inappropriate nature of their conduct for someone of their stature is taken from the Shalah, Devarim 19.

Another chapter collects some of the chassidishe stories related by R. Garelik, mostly from those published in his name in Shemuos Vesipurim.

The final chapter contains a few private letters, most of them written to R. Peretz Mochkin of Montreal, that express R. Garelik’s genuine humility and chassidishe character.

The hallmark of the education given in Tomchei Temimim in Lubavitch was penimiyus. As a result, many of the temimim, including R. Garelik, wrote and spoke little of themselves and their Torah chidushim. To paint a picture of R. Garelik’s life and personality, our author is thus compelled to draw primarily from the memories of the people whose hearts and minds the Rov touched.

Hatomim Harishon is a good collection of oral history, presented in an easy-to-read style. However, the book would have benefitted from more research and analysis of documents and historical sources to fill in the gaps in the narrative about R. Garelik’s early life and improve the historical accuracy of some of the stories related.

For example, a description of R. Garelik’s birthplace Rogatchov could have been given, along with information about its long Chabad history. The local yeshivah in Rogatchov where he studied can be identified as the yeshivah headed by R. Elyakim Getzil Arlozorov (see Encyclopedia shel Hatziyonut Hadatit, vol. 1, p. 620).

Historical sources could also have been used to paint a better picture of the early years of Tomchei Temimim in Lubavitch. The author lists a few of the other founding talmidim of the yeshivah but a number of others are missing. A “Shmuel Eliyahu” mentioned in a letter from the Friediker Rebbe from this time is interpreted as referring to R. Eliyahu Shmuel Kahanov, but research shows this identification is impossible: R. Kahanov was born in 5647 and entered Tomchei Temimim only in 5663.

The book’s title describes R. Garelik as the “first tomim,” which can arguably be justified despite the fact there is no reason to consider him more “first” than any of the other founding talmidim. But the description of him as the first Rov produced by Tomchei Temimim—an assertion made by others as well—can be shown as inaccurate.

R. Shmuel Eliyahu Elkin (5636-5721) was one of the original temimim not listed by our author (also omitted in Lubavitch Vechayaleha and Sefer Hatemimim), and he should be identified as the Shmuel Eliyahu in the aforementioned letter of the Friediker Rebbe. R. Elkin was appointed as Rov of ‘Bichov Yashan’ (now Bykhaw, Belarus) in 5661, the year prior to R. Garelik’s appointment in Berezna (see R. Elkin’s introduction to his Yad Shmuel), and went on to hold a number of rabbonus positions in the United States, and, in his later years, Eretz Yisrael. R. Garelik knew R. Elkin well of course, and he is the “old friend named Elkin” in whose name R. Garelik told a story about the Rebbe Rashab (pp. 464-465).

A story whose accuracy could have been improved by research is one R. Garelik often told about his semichah. We read that he proudly related that he was a third-degree musmach of the Alter Rebbe, having received semicha from a “Reb Hersh Ber,” whom our author tells us was the successor of R. Yitzchak Eizik of Vitebsk, who received semichah from the Alter Rebbe. This Reb Hersh Ber can be identified as R. Tzvi Dov Lotker, who was in fact the grandson-in-law and successor of R. Yitzchak Eizik of Homil (see the new edition of Lesheima Ozen, p. 216 and 230). Incidentally, the Rov of R. Garelik’s hometown of Rogatchov, R. Shneur Zalman Klatzkin, was R. Hersh Ber Lotker’s son-in-law.

Hatomim Harishon is a good book of oral history about the interesting life and edifying activities of a Rov whose life spanned generations and continents. Readers can learn much from R. Garelik’s life and leadership that combined determination and sensitivity.

Hatomim Harishon can be purchased here.