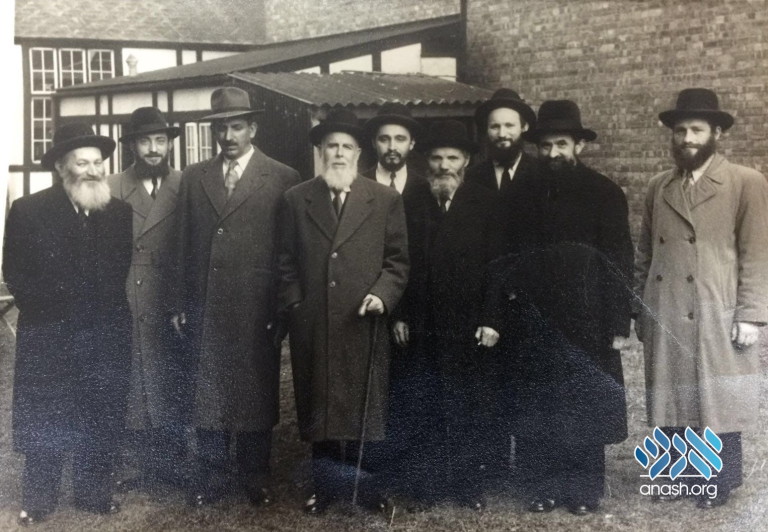 The following photo is from the early days of Lubavitch in London. Anybody with additional information about the time and exact place where the picture was taken, as well as the names of the unnamed, please comment below.

R’ Shmuel Grossman, son of the chossid R’ Osher (Grossman) Nikolayever, who was very close to Beis HaRav and whom the Rebbe Rashab gave the task of printing the Tanya that was printed in Vilna in 5660/1900. He was born in 5650/1890 and in 5667/1907 married Rochel. His sister Chaya Frieda was married to Reb Shlomo Aron Kazarnovsky. He passed away in 5740/1980.

R’ Sholom Ber Raskin was the son of the shochet and mohel Reb Yakov Raskin and a brother of the mashpia and shliach Reb Dovid Raskin. He was zoche to be meshamesh the Rebbe’s father in Alma Ata. In 5711/1951 he married Rivka Schapiro, daughter of the chossid Reb Avrohom Shaye Karelevitzer (Schapiro) and his wife Bluma, both of whom passed away during the siege of Leningrad in the winter of 5702/1941. Together they raised a beautiful chassidishe family. He too was a shochet, serving for the London Beis Din kashrus organization. He also served the London Chabad Community as Baal Koreh, Baal Teffilah, Baal Tokaiya and Gabbai for over 50 years. He passed away at the age of 88 in 5774/2013. His youngest son is Dayan Levi Yitzchok Raskin the Rav of the North London Chabad Community today.

R’ Meir Gurkov was a tomim in Lubavitch who the Frierdiker Rebbe made a ShaDar and who was exiled to far away Kazakhstan in 5699/1939. After surviving the war he settled in London where he sat and learned and davened and was a dugma chaya of what a chossid is. Reb Meir was honored by the Rebbe with gelilah on Moshiach’s sefer Torah that was finished in honor of Yud Shvat 5730/1970. He passed away on Chol Hamoed Pesach 5735/1975.

R’ Yakov Yosef Gurkov was a chossid who was a mashgiach in some of the underground yeshivos in Russia, together with Reb Mendel Futerfas. In 5707/1947 he escaped and made his way to England, together with his father, the chossid Reb Meir Gurkov. In England he was a mashpia who went to great lengths to spread chassidus among local frumme Yidden. In 5742 he moved to New York, where he passed away at the age of 85 in 5753/1993.

R’ Benzion Shemtov was a baal mesiras nefesh who was jailed by the Soviet authorities for his work to spread Yiddishkeit. He came to England after WW2 and laid the groundwork for the Lubavitcher institutions in England. He also was active in disseminating the Rebbe’s Torah by creating the Vaad L”hafotzas Sichos. In his later years, he lived in Eretz Yisroel, where he passed after being injured in an automobile accident, on 5 Tammuz, 5735/1975.

R’ Ovadia Schtroks was a chossid who raised a large family in England. Born in Uman, Ukraine to R’ Nachman Zeev Schtroks, he studied in the Lubavitcher yeshiva in Kremenchuk. He came to London in the 1950s having worked as a shochet in Dublin, Ireland. He was a melamed who taught thousands of children over the years, well into his golden years. He was also the baal tefillah during yomim noraim in London. He passed away on the 5th of Tishrei 5771.