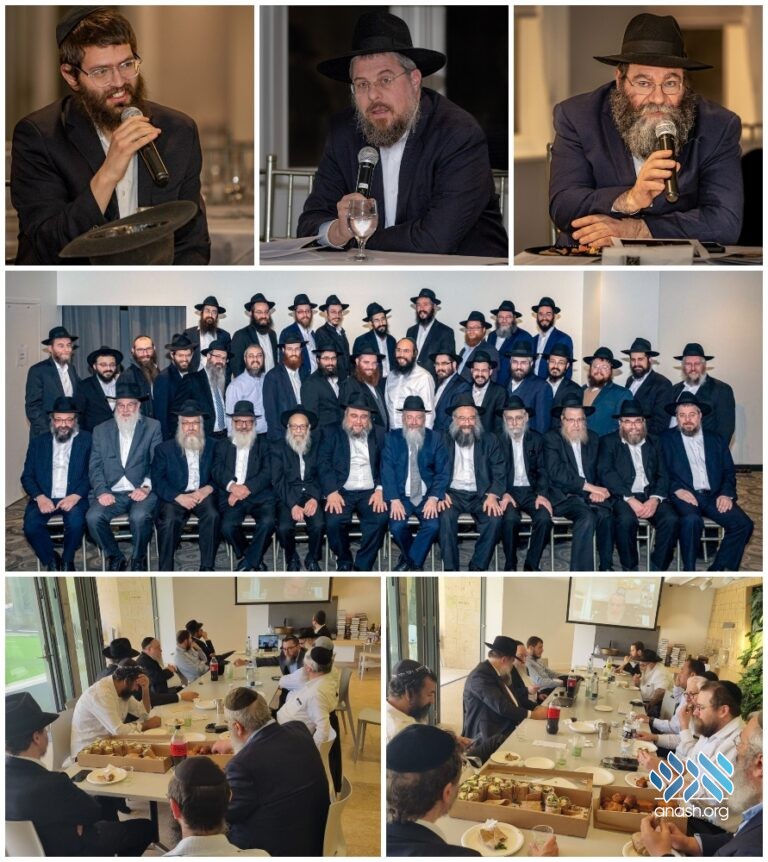 Gatherings were held both in Sydney, Australia, and Detroit, Michigan, last week in preparation for Yud Alef Nissan and to launch new mosdos as a gift for the Rebbe for his 120th birthday.

Gatherings were held both in Sydney, Australia, and Detroit, Michigan, last week in preparation for Yud Alef Nissan and to plan for further growth in each of their shluchus’n. The meetings were organized as part of a campaign by Vaad Or Vechom to institute 1210 new mosdos in honor of the Rebbe’s upcoming 120th birthday.

In Sydney, shluchim were joined via Zoom by Rabbi Sholom Ber Levitin, Head Sliach to Washington who shared how he was sent on shlichus to Seattle in תשל”ב as part of the Rebbe’s establishment of seventy-one new mosdos in honor of his seventieth birthday.

Sydney Head Shliach Rabbi Pinchos Feldman led shluchim in planning a massive matzah campaign which will encourage local Anash to sign up to distribute at least one matzah package to a friend, neighbor, or acquaintance. Rabbi Feldman explained that with the help of Anash community members, the mivtzah will be able to reach further and to people who shluchim wouldn’t necessarily reach on their own. “Shluchim reach the people within their community or in the scope of their mokom hashlichus, but everybody knows somebody to who they could give matzah,” said Rabbi Feldman.

At a fully catered dinner held especially for the occasion in Detroit, Rabbi Kasriel Shemtov, representing Chabad Lubavitch of Michigan also shared anecdotes from Yud Alef Nisan תשל”ב. When the Rebbe called on shluchim to add seventy-one new mosdos around the world to mark the occasion, Rabbi Kasriel’s father, Head Shliach to Michigan, Rabbi Berel Shemtov began a number of  projects as part of the Rebbe’s campaign. One of these was reaching out to a new demographic at the time: university students.

Rabbi Berel Shemtov would send reports and updates to the Rebbe, detailing all aspects of the mosdos they had established. On one du”ch, Rabbi Shemtov included a report from  Shliach Rabbi Yitzchak Meir Kagen of blessed memory who listed the names of seventy-one students with whom they had developed a connection. Rabbi Kasriel said, “it is notable that many of those individuals listed are today heads of large families of observant jews and chassidim, this was an institution established in honor of the Rebbe’s 70th birthday and today 50 years later the fruit are continue to blossom.

Rabbi Kasriel explained that this year’s campaign by Or Vechom is a continuation of the Rebbe’s request on his seventieth birthday. “At the time, on the one hand the Rebbe wanted this to be a time of real growth with new shluchim and institutions. On the other hand included in the seventy-one mosdos were individual projects, as simple as reaching out to a new demographic which had profound effects. For us this means that now too, the mosdos project is something that every shliach can take part in.”

Michigan shluchim encouraged each other and discussed how can each expand their respective shlichus. By the end of the event they had pledged more than fifty mosdos. Among them a new Chabad house, new shluchim, mikvaos, kolel z’keinim, shiurim, newsletters, Hebrew schools, and a range of other programs. Large distribution of matzah, tefillin and mezuzos in honor of Yud Alef Nissan were also planned.

In Sydney too, the gathered shluchim pledged to begin at least 60 new mosdos as part of the initiative of 1210 new mosdos by 11 Nissan.