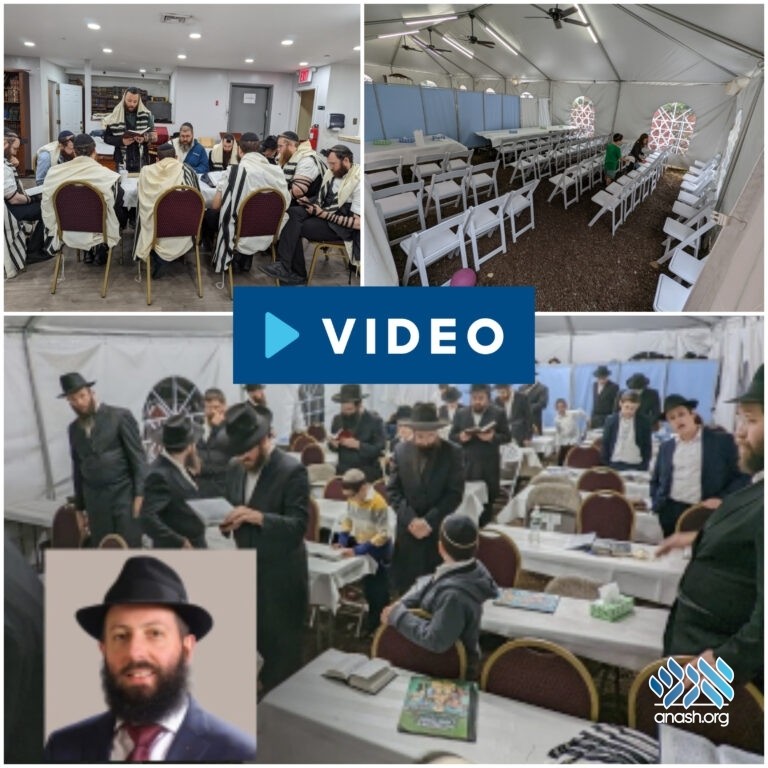 Five years ago, they had to knock on neighbors’ doors to complete a minyan. This Rosh Hashanah, close to 200 men, women, and children gathered in this East Flatbush shul.

As Rabbi Rafi Chayo entered his East Flatbush shul shortly before sunset on the first night of Rosh Hashanah, he stared in wonder at the sight that met his eyes. As he surveyed the scene – dozens of chairs set around close to 20 tables, many of them already occupied by eager mispallelim – he thought back to five years before, when the first minyan for anash in the neighborhood took place.

Eight years ago, Rabbi Chayo made a bold move and relocated his family to the East 30s and 40s neighborhood of East Flatbush. At the time, there were no other lubavitchers living there. Over the next few years, several families bought homes in the area, but there was no framework for a cohesive community.

In 2017, Rabbi Yosef Yitzchok Holtzman, rav of the East Flatbush community and shliach to SUNY University and Medical Center, decided to hold Rosh Hashanah and Yom Kippur services in the basement of Rabbi Shmuly Zaklikovsky, who had recently moved to town. It wasn’t easy – like a good shliach, he found himself knocking on neighbors’ doors and windows, schlepping people in to complete the minyanim.

“He began speaking about building a community,” Rabbi Chayo recalled. “I told him I’d be happy to help if he needed me, but I wasn’t looking for a new community – to me it sounded like a nice dream, but nothing more.”

In the year that followed, the small group of anash continued to meet for minyanim in the Zaklikovskys’ basement; before long, Rabbi Chayo found himself deeply involved in the efforts to build a community. Anash continued to trickle in, and by 2020 there were 35 families living in the neighborhood. They formed a close knit kehillah and began developing infrastructure. Then, something amazing happened: the trickle of families became a steady stream, and by the summer of 2022, the community had grown to over 70 families!

“During birchas kohanim this year, as I held my children under my tallis like so many other fathers in the room, I suddenly felt a deep sense of awareness,” Rabbi Chayo said. “I realized that all of us in this shul are pursuing the same path – we’re trying to improve ourselves, and to shape a strong Yiddishe future for our children. Eight years ago I moved out here on my own, but I am no longer alone. I’m working towards my goals alongside a big, supportive group of friends.

“I remember how skeptical I was that first Rosh Hashanah, and I laugh. These days, I am constantly looking around in amazement. There are so many anash here, it’s become normal to walk down the street and bump into a fellow lubavitcher, to see young mothers pushing strollers as if it’s Kingston Avenue. Our shul is full of children, and every program is bursting at the seams. Five years ago, this kehillah had a dream, and the dream came true!”